The American who Became a Sikh Yogini 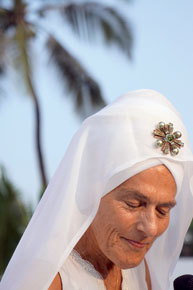 We sit down at a five- star hotel in suburban Mumbai, and before the interview begins, Gurmukh Kaur Khalsa, known popularly by the appellation ‘the Queen of Kundalini’, says that she has a request: “Celebrities. Famous people that I have taught. I’m sure you have gone online and read about it and I live in Hollywood. But that subject is not open.”

That strikes two questions off the list. She will not tell us that she has taught Madonna, Gwyneth Paltrow, Courtney Love and others. The foreword to one of her books, Bountiful, Beautiful, Blissful, was by Cindy Crawford, who wrote, ‘When I became pregnant with my first child, my friend told me, “You have to take this class. It will be great for you and the baby.” …Honestly, I wasn’t one of those women who loved being pregnant, in the sense that I didn’t feel I was at my sexiest or most beautiful, as some do. In Gurmukh’s class, there would always be a point at which we would sit without hands around our bellies and sing to our babies. In that moment, I always felt the tremendous power we as women have to bring new life into the world It’s awe- inspiring… It’s unfortunate the whole world can’t come to her class and feel her energy directly—although sometimes it feels like it, her classes are that popular! Her radiance lights up a room. The strength and confidence she imparts to us is just so wonderful.’

Gurmukh, who is in India to conduct a series of workshops and to take part in the International Yoga Festival in Rishikesh, is one of the leading teachers of Kundalini Yoga. It is a form of spiritual exercise created by her guru Yogi Bhajan, a Sikh Customs officer from India who became a guru and migrated to the United States towards the end of the 60s, and gathered a large following. Gurmukh is actually an American who became a Sikh after meeting Yogi Bhajan. She was a flower child, of that generation of hippies who combined anti-war protests with psychedelic drugs and beat poetry and free love, questioning materialism and power.

“I was born and raised a Christian. I was very involved in my church,” she says, “Then one day, I asked, when I was about 9 or 10 years old, ‘If you aren’t a Christian, will you go to hell?’ They said ‘yes’. My next question was ‘What if you didn’t even know about Christianity, that it didn’t even exist?’ They said, ‘yes’. I said, ‘I’m gone, I’m outta here.’ That was it. There was that judgment that came with that which was downright stupid. Now, as years went on, I found that Jesus never said that. He was actually a renunciate. Like a sadhu.”

The 60s came and Gurmukh became a hippie in San Francisco. It was a freewheeling life that later took her to Hawaii, where she lived on a beach.

“I took a lot of LSD. I smoked a lot of marijuana. I lived what I thought was a free life, doing anything that I wanted,” she says, “And time went on and the question came to me, ‘Are you going to do this the rest of your life?’ I’m 24 years old, and I [wondered whether] I’m gonna keep bodysurfing till I’m 80 years old.”

She soon found herself in a Zen Buddhist monastery. “From drugs and freedom, no schedule, [doing] anything I wanted to do, I ended up sitting 16 hours a day in meditation staring at a wall, one crack in the wall,” she says, “That went on for almost two years. I said that the only way, by this time I was 26… the only way I’m going to live in this world was by becoming a Zen nun. Because I was such a freak, I didn’t fit into anything. I can’t go back, I never had a driver’s licence, I was like a sadhu in America. I had no money, nor did I want it. I never had a bank account. I never had a credit card. I had no home, anything. I was what I thought was free.”

She was invited by the head of the Zen order to Japan to become a nun there and teach English. So she decided to head back to Los Angeles to find her passage to Japan. One day, at a birthday party there, the host, a 21-year-old friend, told her to stay after the party. “And he had me do this particular meditation; it was a constant bowing. He said, ‘I was told to take you to Arizona.’ I didn’t ask him who told him. Later, I heard he was just hearing voices all the time.”

And, just like that, Gurmukh went to Arizona. They travelled for three days, stopping in between at Disneyland and finally reached Tucson, Arizona, where Yogi Bhajan had his ashram. It was 1970. “I did one Kundalini yoga class and it was like I had come home. And I just started crying and crying and crying. It is what I had searched for my whole life,” she says.

It connected the dots in her life that had eluded her. “I was part of this flower generation, thousands of us, we didn’t fit in, we weren’t going to do what our parents told us to do, but we didn’t know our destiny at the time. That is why we took LSD. People think it was so bad. It wasn’t so bad, you know why? In the West it gave us an experience of god, because there was no god in America; god was refrigerators, god was stores, god was new cars, materialism was on the rise, kind of like in here in India actually. And our parents never thought about the purpose of life, destiny of life. It was just ‘Get more, get more, get more.’ And we, this generation, said, ‘This is a lie and we are not going to do it.’ We left college, we left home, we wouldn’t go into the army, we became these crazy hippies. When I met Yogi Bhajan, it was like… look, you live in India and you have a chance to sometimes to see saints, you can go to caves, you can go to Rishikesh, you can go to places… there was no possibility of the potential of the human being in the US. There was no example of how you could be. He gave us that example.”

Gurumukh’s first encounter with Yogi Bhajan was two months after she arrived at his ashram in Tucson. “When I met him, he gave me my name. He said, ‘You will help thousands of people cross the world ocean’ (which is what Gurmukh means). At that time, I was 26. I had no idea what he was talking about. I was just cleaning out of drugs. I was just trying to get my head on straight. [Yogi Bhajan] liked manual labour. We ran vegetarian restaurants and I worked so hard that I sometimes forgot to take my clothes off at night, I was so tired. The teachings are so simple. Share your money, your time, your love, everything. That is so easy. But takes everyday doing it. I found my patterns got better and better because I was so crazy—one from the drugs, one from the misbeliefs I’d been told. I still get up in the morning before the sun comes up, bow my head, and say, ‘Thank you.’ It gave me purpose and destiny. I am 72 now,” she says.

Kundalini Yoga, Gurmukh says, is a science of breath and angles of the body that delivers you to your own soul. “So you know who you are and you know what you have to do here. It is a tool for that. We do chanting, dancing, mantra, mudra, we run in place, we do all kinds of things because Yogi Bhajan never taught anything twice. Like today, when I go out to teach, I don’t know exactly what I’m going to teach. But I know I have to follow manuals,” she says.

When she was in her early twenties and leading the life of a hippie, Gurmukh had a child but lost him when he was seven months old. Twenty years later, at the age of 43, she gave birth again, this time to a daughter. It was an easy normal birth at home with a midwife present. She was asked by other women how she could have such an uncomplicated delivery despite her age. “I said, ‘Well, I did these yoga moves,’ and it went on, and somebody wanted to do a video with me on pregnancy, so I said, ‘I have to ask my teacher. Because I am just making this up, I don’t know if this is right or not.’ And I went to him,” she says.

Gurmukh describes Yogi Bhajan as an imposing personality who would sit with his feet up on the table, leaning back a little. “I said, ‘Sir, they want me to shoot a video, pre-natal and post natal, and I don’t really think I know what they are doing, I am just making it up.’ And he looked at me, and his eyes were like owl’s eyes and they got bigger and bigger when he looked at you. And he just went like, ‘You know everything, get out of here.’ So he handed me, as I see it, the mantle or the gift of this part of his legacy. Because he had [such a vast] legacy, but this was one thing he had to give away because he needed a woman and that was about 27 years ago,” she says.

Gurmukh’s pregnancy yoga, called The Khalsa Way, is one of the things she is most famous for. It advocates natural childbirth at home and changing the mental patterns of the expectant mother so she passes it on to the baby, who then comes into the world happy. “I started teaching teachers and now we have them all over the world. Teaching pregnancy yoga, through meditation, movement, music and community. It is so magical. What a baby thinks is what a mother thinks. We are copycats, the cells divide, and if a mother can change her mind through meditation and prayer [it influences the baby]. We educate [mothers]: why to nurse your baby, why to sleep with your baby, and stay home for the first 40 days because you bond with your baby. In the West they don’t know anything about this. This is brand new for them.”

Gurmukh often travels across the world teaching Kundalini Yoga, usually training teachers who can then spread the discipline.

She still feels Yogi Bhajan’s presence. “Sometimes he tells me what to teach. I feel him so much. What he gave us was his teaching, and that was his gift. I don’t hear him, I just open the book and know that now it’s time to go teach.”