SMS in Times of WAP

Cellphone technology is set to blister its way ahead, thanks to 3G services. One can hear the death-knell of the short message. 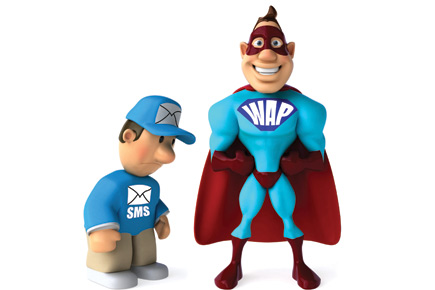 Cellphone technology is set to blister its way ahead, thanks to 3G services. One can hear the death-knell of the short message.


For someone born of a mistake and with Short as a first name, the SMS has lived quite a long life. Its was the classic tale, a backroom boy, a mere platform for operators’ own messages, who suddenly grew into a phenomenon. The SMS wasn’t just a mode of communication, its strangely huddled together acronyms became the lingua franca of a new generation—the SMSers. It defined everything they did, the music they heard, the movies they saw, the clothes they wore, even the gossip they shared… especially the gossip they shared.

It was a rather cosy arrangement between the SMS and SMSers, till the unthinkable happened. Ambitious SMSers moved on from what they had dubbed the ‘Most Practical Invention of the 21st Century’. They were fast being replaced by the Wap generation obsessed with a little green dot against their name. This, as cellphone marketers lay a never-before-seen emphasis on email services, chat clients and every other little bit of gizmo-wizardry that makes the handset the perfect social networking device. After all, 3G spectrum has been allotted, and mobile telephony is preparing for a season of razzle-dazzle.

Early drums are already banging. Even as we speak, the idiot box continues to sun-dry millions with ads attesting to the cellphone’s new ‘essential skill’: ease of social network access. Locked in a trailer, Mahendra Singh Dhoni bears blazing witness to the virtues of Aircel’s INQ phone. Overcome with buddiehood, John Abraham sells Abhay Deol’s stuff on a social network through LG Cookie Pep. All this televised action, while a boy too busy updating his Facebook status on a Micromax phone is hit by a car.

The social network’s closing in, and the SMS looks more forlorn by the day. Technical advances have a role in all this. While most phones nowadays, even entry-level ones, let you log in and check your email, it’s push mail that’s challenging the SMS to a shootout.

Nokia jumped on to the push mail bandwagon last month, something that BlackBerry had so far monopolised. Gmail now offers its own version of the push mail service; just keep the data connection on.

With push email already out there, it was only to be expected that Nokia would launch an exclusive chat similar to BlackBerry’s hugely popular Messenger service—free for all its customers worldwide, it works only with compatible handsets and makes SMSs practically redundant for them.

If that was not enough to shake the SMS’s confidence, there are open source chat clients. GTalk, for example, can be downloaded to your cellphone with ease, and several other open source chat clients let you connect to any of your other chats. There’s Nimbuzz, which lets you connect and chat with all your friends on Facebook. There’s also GTalk, Yahoo! and more. Even Chinese knockoffs like HiPhone and BlackCherry (versions of iPhone and BlackBerry), which are perfect copies save Wap services, can now surf the internet and come pre-loaded with chat clients.

In the light of the above, it would be foolish for the SMS to hold out hope for itself, wouldn’t it? Satchit Gaekwad, spokesperson of Research in Motion in India, agrees. “While the SMS was once the preferred mode of text communication,” he says, “with more and more data enabled smart phones penetrating the market, instant messaging, social networking and email, the SMS has taken a side step.” There are now teeming hordes in India “who don’t miss the SMS and don’t really need it”.

Meanwhile, SMS usage among smart phone users is restricted to ‘people you haven’t added yet’.

While it might be dismissed as an urban fad, experts say that mobile internet has greater potential in rural India, given its ease of use. Surveys like Dsquared have predicted a 233 per cent increase in Indian mobile internet users to 260 million by 2015. Another survey pegs the figure at 162.1 million by 2014, up from 12.1 million today. By then, at least two in every three phones will be ‘smart’, according to IDC projections.

It’s bound to sound the SMS’s deathknell. Jayesh Shinde, a senior reviewer with PC World, agrees that simple texting will look fuddy-duddy once the 3G proliferation begins. But he doesn’t think it will threaten its very existence: “Being online is going to cost you money… and more people relate being perpetually online to being more expensive than buying an SMS pack.”

Tragically, much of it is actually a misconception. Rajat Agarwal, editor of a cellphone blog, Cell Passion, concedes that internet usage has gotten cheaper down the years. “Plans now start at Rs 98 for up to 2 GB of data usage,” he says. But things aren’t that simple. Agarwal says some operators offer rates as low as Rs 100 for 1,000 SMSs.

Gaekwad and others professionals who use instant messaging insist their SMS usage has drastically dropped, and it shows up on their cellphone bills. Throw in an ‘eat-all-you-can’ data plan, and you begin to wonder why you didn’t do it earlier. Instant messaging makes it virtually free to talk to friends anywhere in the world, glitch free.

An industry expert, though, insists that “the SMS is here to stay” because instant messaging clients are good only so long as your friends and contacts stay online, while a short message can reach them whenever they drag themselves out of bed (or a daze). But with the fancier services dutifully delivering instant messages even if it’s not that very instant (as soon as the contact comes online, that is), this won’t guarantee the SMS a future.

Nikhil Pradhan, another senior reviewer for PC World, says that many smart phones are still to develop comprehensive contact management features which let you synch contacts from across social networks and chat clients with your phone book, something that is available only in the more expensive smart phones. “Having two separate lists of contacts is still a factor that keeps SMS the preferred mode of quick communication,” he says. Plus, there is the good old aversion to being on an electronic leash round-the-clock. “I might be speaking through my hat on this one, but not everyone on my phonebook is on my chat-list and vice-versa (same with social networks),” he adds, “SMS, mobile-chat, etcetera can exist side by side.”

But, alas, there is only so much text messaging one can do. Even if the SMS isn’t strapped to a cannon and blown to bits like its multimedia counterpart, the MMS, it’ll be at best a mere shadow of its formal self. A king disrobed, if you will.

What changed? According to Gaekwad, everything did. Work style and life style are now a blur, he says, and plain text is just too darned plain to keep up. You can’t send pictures, files, links and what have you.

PS: All isn’t bleak, though. If the SMS goes, your copy of Neil Strauss’s The Game goes too. The rules of dating are changing. That one moment that sends pangs of panic shooting up and down your spine—asking a girl for her phone number—is passé. Now it’s her email or BlackBerry Pin. Or better still, an enlisting on Facebook.