Salt of the Chic

Common salt, did you say? These are boutique crystals, scraped from the Himalayas or harvested in France, bursting with health benefits and snob value. Go on, wake up and smell the salts 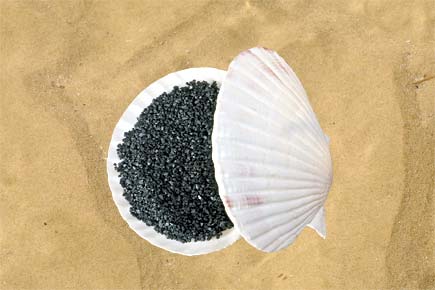 These are boutique salt crystals scraped from the Himalayas or harvested in France, bursting with health benefits and snob value


Translucent pink chips that look like ancient rubies mined from the Himalayas. White crystals with startling blue sapphire flecks extracted from the Iranian desert. Earthy red and ink black chunks sourced from volcanic lava in Hawaii. Seems like we are stringing together a rare gemstone necklace? We’re not. These are just some of the exalted salts being served at the high tables of cuisine by celebrity-chefs, gourmet cooks and health seekers globally.

From artificial iodised grains to coarse and natural crystals, salt, an essential ingredient for human survival is undergoing a kitchen amendment. Health believers and chic cuisine creators are lashing out at iodised salt, a cocktail of chemicals such as potassium iodate, bromides and anti-caking agents. Nutritionists are swearing by the natural grit and trace minerals in salts sourced from primal seas, geological fissures and namakiers, as the salt glaciers of Iran are known in Farsi. Chefs believe true flavours come from relic salts scraped from the Himalayas and heritage pans in Europe. Salt from the sea? For salt snobs only white diamonds will do. By this we mean, ‘fleur de sel’, the fluffy delicate salt blooms harvested in France imbued with ‘a violet-like perfume’.

Prized for their flavour and mineral content, boutique crystals are priced at about Rs 2,000 for 40-50 gm, while regular iodised is Rs 7 per kg. So you’ll be glad you only need a pinch of these colourful dietary minerals which crunch loudly under your teeth.

Slowly, in our country which has never had a salt shortage in history, salt is becoming an epicure’s obsession. At the centre of which is Himalayan salt. Born from primal seas that dried up 200 million years ago, these pure rose pink rocks contain up to 84 minerals ranging from calcium to copper. With oceans getting contaminated by chemicals, discerning eaters are turning to this sea salt that was fossilised when the Himalayas rose from the oceans. Nutritionists say this Jurassic salt actually undoes imbalances in the body since it echoes all our blood elements.

At the fine-dining Italian restaurant Diva in Delhi, chef Ritu Dalmia switched from grains to crystals three years ago. She now pairs scallops with the Hawaiian Red Salt, prawns with Norwegian smoked salt and meat with Italian grey salt. She says, “They enhance flavours and look spectacular on the plate.”

Chef Ritu has also tossed out individual salt shakers at Diva. She’s replaced them with grinders filled with Maldon, a hand harvested salt from the estuaries of Essex, whose salt centres date back to the Iron Age. Celeb-chefs like Jamie Oliver swear by the crunch, feel and melt of Maldon. In his book Appetite, food guru Nigel Slater is specific: “When I say salt, I mean Maldon.” About other salts, he says: “I have used them to melt ice in the garden, or for murdering slugs.”

When home, due to diabetes, Ritu eats dal-sabzi seasoned with sendha namak. Originally from Sindh, saindhav namak is traditionally used during religious fasts. To meet this need, Delhi-based food retailer Lalit Asrani of Rhoda Ji Foods has been importing 800 wagon loads, weighing 25 tonnes each, of Pakistani sendha namak—each year for the last 30 years.

“Two years ago, based on a gut feeling when I was at a fair in Europe, I picked up gourmet salts since I thought the market was ripe in India,” says Asrani. So far, volumes are insignificant. He says this is because they have to be packaged in expensive ceramic grinders, since salt corrodes metal.

Holding up a rainbow of salt jewels against the light, Asrani shows off red salt from Hawaii born of tidal sea crystals meeting red volcanic clay sediments. There’s Iran Blue, with enough potassium and chlorine to be called a noble salt. And there’s Danish Smoked Salt, smoked over red elm wood as Vikings used to do. Saving Himalayan for the last, he calls it “the purest”.

The sparkly presence of gourmet salts also reveals our final crossing. From the iconic fistful of coarse natural salt plucked up defiantly by Gandhiji in Dandi to the artificially iodised grains that we’ve been pouring out of branded packages to prevent disease, salt hasn’t just mingled in our blood, sweat and tears. It embodies the start of Swaraj and our reaction to oppressive salt taxes, the highest ever in the world, imposed by the British upon our own namak.

With the Government re-instating the ban on the sale of non-iodised salt four years ago, natural salts are now forbidden. Eco-nutritionist Kavita Mukhi asks, “Democracy means choice. Why are we banning the natural salt that Gandhiji fought for, which we’ve eaten for centuries? Iodised salt is simply sea salt that is refined to take away natural minerals, which is then artificially iodised.”

For Ganesh Eashwar, who’s set up the eco-store Dubden in Delhi, desi namak has been remedy and salve. This former advertising executive broke out in bizarre skin conditions some years ago. For three years, his skin, itched and burned, before peeling entirely off his body. All bodily functions broke down. Unable to attend office or read the papers, months went by dully as his weight dropped by 16 kilos. He wandered from allopaths to pathologists, till a homeopath advised him to give up iodised salt, eat food cooked in earthen vessels sprinkled with sea salt. Slowly, he regained his ability to read, write and think. Today, he’s a cured man, who can occasionally eat out if he’s got an anti-histamine in his pocket.

Legendary restaurateur, George Lang who orchestrated banquets at the Waldorf, once said, “I have tasted the future and it needs salt.” If he were around now, he’d be tasting salt in all its avatars at the recently opened Caperberry restaurant in Bangalore. This Progressive European eatery sets out ‘oil-and-salt bars’, so dinners can dip their focacia and ciabatta into olive oils paired with celery, rosemary and thyme-flavoured salts. Their signature cocktail, One, made with Grand Marnier, orange vodka and orange sorbet, is finished with an ‘orange salt sphere’. To intensify fruit tarts, they use oven dried sea salts combined with cinnamon and cardamom.

Caperberry’s chef-owner Abhijit Saha, who is also a guest speaker-chef at the Culinary Institute of America, says he only uses sea salt since “artificial iodisation causes flavour complications”. They cook their meats sous vide or under vaccum at very low temperatures for long hours. This is a flavour intensification method, used by culinary maestros such as Thomas Keller and Joel Robuchon. At Caperberry, the sous vide New Zealand Lamb racks are studded with crystals on top to prevent the draining of flavours and juices. “The visible specks of salt also add a beautiful look,” says chef Saha.

Quoting his food hero, Heston Blumenthal, the master of molecular gastronomy, chef Saha says, “Blumenthal pairs salty caviar with white chocolate, but I don’t think we’re ready for that yet.” Maybe. But we’ve always loved crunchy salt jousting against sweetness, as any maker of roadside bhelpuri will affirm. Fear not. Some things are sacrosanct. Catch us swirling in smoked Italian namak in our pani puri.