Archery is spinning big bucks in Meghalaya, but few seem to be interested in it as a sporting discipline. 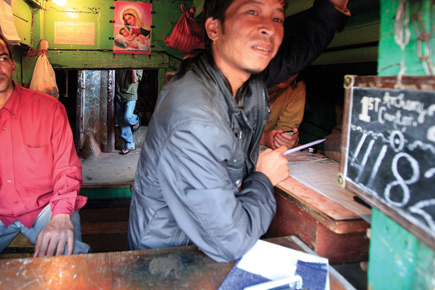 Archery is spinning big bucks in Meghalaya, but few seem to be interested in it as a sporting discipline.


This stuff is all about dreams, about interpretation of dreams. Dreams that can translate into a rich windfall, or severe disappointment. Even financial ruin. Dreams are what turn the wheels of the estimated Rs 750 crore-a-year gambling business that masquerades as the traditional sport of archery (teer in local parlance) in this picturesque capital city of the Northeastern hill state of Meghalaya.

Legalised by the state government only in 1982, gambling through archery has been in existence for more than a hundred years now. Archery, the traditional sport of Khasis (the local tribe), has always been associated with a bit of betting. Local chroniclers say that the manner in which archery competitions were held in villages lent itself well to gambling. “Archers would shoot only in groups and not individually. The group that would get the maximum number of arrows in the target—arrows of the various groups would be coloured differently—would win the competition,” KS Nongkynrih, who has researched the sport, tells Open. After the turn of the last century—no one really knows the exact year—clubs of various localities and villages in and around Shillong started holding a weekly archery contest. “Betting and gambling started slowly from there. The competition evolved and took its present form only in the late 1950s when a unique system of adapting the results with the requirements of gambling emerged.”

“The last two digits of the number of arrows embedded in the target would be the ‘winning’ number. For instance, if 1,043 arrows hit the target, the winning number would be 43,” says Nongkynrih. Many rules, he adds, have changed. But till gambling was legalised, it was chaotic and often violent, prone to rigging and controlled by musclemen and criminals. Gambling through teer, as it exists in Meghalaya today, has no parallel in the rest of the world. A complex set of rules and practices govern the daily competition held at a small ground about half the size of a football field in a corner of what was once a polo field on the outskirts of this city.

The ‘sport’, if at all it can be called that, is now controlled by the Khasi Hills Archery Sports Institute (Khasi) that conducts and governs the daily competition. Twelve clubs affiliated to Khasi are allotted turns to shoot at the ground. “Two clubs get their turn every day from Monday to Friday, and on Saturday archers of all the clubs get to shoot. We make the roster and issue them to all the clubs as well as the bookies every fortnight,” says a Khasi office-bearer. Two rounds of the competition are held every afternoon, the first at 3.30 pm and the second an hour later. The roster specifies the number of arrows allotted to the archers for the two rounds—1,800 and 1,200 respectively on weekdays and 1,980 and 1,320 respectively on Saturdays—as well as the size of the target. The state government issues licences to the bookies—there are 1,537 licensed teer counters across Meghalaya and a couple of hundred more that operate illegally in Assam and even as far away as North Bengal. In 2008-09, the state earned Rs 115.5 lakh as revenue from the ‘game’ while the annual turnover—bets placed—could easily go up to Rs 750 crore if the bets from outside the state are factored in.

“What did you dream last night?” is the question tens of thousands of desperate gamblers ask even a passing acquaintance every morning. The figures, events and objects in a ‘dream’ are then decoded—a snake ‘seen’ in a dream represents the number ‘7’, fire is ‘4’, a woman is ‘5’, a man is ‘6’, a baby ‘3’, a two-wheeler ‘00’ and so on. The gamblers then sprint to the nearest bookie to place their bets—from as little as 10 paise to a few hundred rupees. Most of the teer counters, where bets are placed, are hole-in-the-wall operations. Some bookies even operate out of just a stool on a pavement. A majority of the gamblers belong to low-income groups, while some big businessmen are also known to place bets, albeit through their agents. Thanks to its shady past, teer suffers from social stigma and a gambler is generally looked down upon. “Teer was, and to a large extent still is, considered dishonourable. People by and large still feel it is disgraceful to bet. To be seen going to a teer counter is shameful, and no respectable person would be seen even dead at a teer counter. That’s why many middle and upper-middle class people who place bets do so through their servants or employees. However, this gambling is not to be confused with archery, which is a traditional sport,” says Nongkynrih.

Like all forms of gambling, teer too is an obsession. In government offices and business establishments across the state, discussing ‘dreams’ and trying to decipher them is a ritual every morning, especially among sweepers, cleaners, peons and clerks. “No work gets done till forenoon, especially in government offices, as the lower-level staff are busy discussing who dreamt about what and what numbers ought to be assigned to the dreams. And then they rush off to the teer counter to place their bets. It’s the same late every afternoon when the results get declared and some gamblers rush to collect their prize money while most sit glum-faced trying to get over their disappointment. Not that it would stop them from betting the next day. But this teer really hampers work everywhere,” says DS Lyngdoh, a senior officer at the state secretariat.

Social activists like Lambor Shullai want the game banned, or at least modified by increasing the minimum amount for placing bets. “This gambling is a social evil and has ruined many people. Since most of these gamblers are already very poor people, teer makes them poorer. It is a myth that a gambler wins most of the time; our studies have shown that a regular gambler wins only between 15 to 20 per cent of the time on an average. Children and women are the worst sufferers and teer has broken countless families and wrecked so many lives. The poor are attracted to this gambling primarily because of the low sums that can be placed as bets: 50 paise or Re 1 may appear to be nothing when one starts gambling, but it soon becomes an obsession with the gambler who starts betting with whatever money he has. Many daily wagers bet with almost all of their daily earnings. The minimum amount needs to be raised to at least Rs 10, if not more. Ideally, this gambling should be banned. But there are very powerful forces who would not let that happen,” Shullai tells Open.

The whole process of placing bets is also unique. Bookies write down the numbers as desired by the gamblers on tiny slips of paper while retaining a carbon copy. “The pads from which we issue the slips are purchased from the government and duly stamped. Government officials conduct surprise inspections to ensure that illegal slips are not issued,” says Subir Das, a bookie. Bets are registered on single or double-digit numbers. Re 1 placed on a winning single number yields Rs 80 in the first round and Rs 70 in the second round of the game. A Re 1 bet on the last digit of the winning two-digit number yields Rs 95 in the first round and Rs 70 in the third. But it is the ‘forecast’ that is the windfall: a gambler who bets Re 1 on the winning numbers of both the rounds gets Rs 4,444. But such winnings, and luck, are rare. Betting closes at 3 pm for the first round and 4 pm for the second round.

The winners have to be paid in cash that very evening. And this ruins many bookies as well; cash has to be given to the winners from the day’s sale proceeds, which may well be below the amount won by gambler(s) who placed bet(s) at that particular counter. “If that happens, and it happens often, especially with the small counters and bookies, money has to be borrowed immediately from a big bookie, who’s called a ‘Mahajan Bahe’, at a steep rate of interest. A small bookie may go out of business, and this also happens often, if the gamblers who place bets at his counter get lucky once too often and the bookie has to borrow money frequently to pay off gamblers,” says Donald Lyngdoh, a bookie. A bookie can have more than one book (from which slips are given out) at his counter. ‘Stewards’ appointed by the Khasi collect fees ranging from Rs 25 to Rs 50, depending on the location and size of the counter, on behalf of the organisation. The archers and clubs they belong to are paid from this money.

The shooting ground, called ‘Madan Thma’ in Khasi, comes alive after noon every day. Archers, bookies, gamblers and office-bearers of Khasi mill around, exchanging notes and gossip, often over liquor or the fiery local brew called kiat sold at makeshift stalls run by ladies that ring the ground. As the clock ticks towards 3.30 pm, the ground is full with tense men and some women. The 45 archers—15 from each club on weekdays and another 15 employed by the bookies to ensure that the archers don’t rig the game by shooting only a pre-determined number of arrows at the target—hunker down on their haunches in a semi-circle, examining their cane bows and reed arrows, about 60 ft from the target. At the blow of a whistle, the shooting starts and the air becomes thick with the ‘whoosh’ of arrows shooting like meteors. It’s over in four minutes at the blow of another whistle; the ‘stewards’ go to the target and take out the arrows that are embedded in it. The last two digits of the number of arrows that have hit the target make for the winning number of that round of the day.

A hush descends as the counting progresses and the result is met with whoops of joy and moans of disappointment. The result gets communicated immediately through cellphones to bookies all over and even outside the state. The number is put up on a piece of paper or a slate outside every stall. A few lucky gamblers trickle in to collect their winnings as dusk settles; most of them invariably spend the money on liquor. The others who’ve lost also hit the bottle to drown their sorrows. And all of them hope to have a better dream that night.