On the Wings of Happiness in Bhutan

In search of black-necked cranes 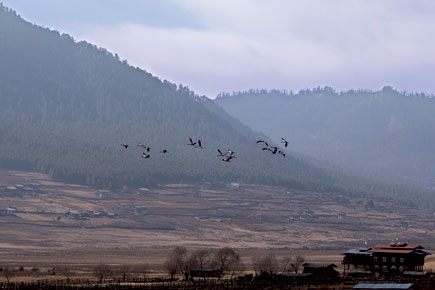 Happiness is relative. It is an escape from the cacophony, crowds and fumes of Jaigaon, West Bengal’s border town next to Phuentsholing, its Bhutanese counterpart. The magnificent Bhutan Gate is all that separates India from the kingdom of Bhutan, the landlocked country with limited entry points. As you walk across, the change in urban landscape is so stark, one mistakes it for a TV commercial showing the difference between good and bad governance, just as detergent ads show you a white shirt before and after a wash.

In Bhutan, pedestrians, like the cars, move about in an organised manner. No honks, spitting, littering or loudmouths. Plastic is banned. There is an aesthetic and traditional conformity to all the buildings. All the signboards are uniform and walls are decorated with colourful Buddhist symbols of luck. Among heavenly clouds and conches, you can spot depictions of an erect phallus too—that of the saint Drukpa Kinley, also known as the Divine Madman. As a symbol, it performs the role of the Turkish evil eye. It is an independent being by itself, drawn with eyes, lips and sometimes even a tail.

On my first morning in Phuentsholing, a national newspaper unimaginatively titled The Journalist has a rare headline, ‘Overall crime rate falls by 15.6 %’. Good news welcomes me to the land of happiness. The UN’s World Happiness Report, released in 2013, ranked Bhutan on No 8 globally and No 1 in Asia. While the rest of the world judges their progress by GDP and other quixotic economic concepts, Bhutan, this tiny dot of a Himalayan country, measures it by Gross National Happiness, a concept developed by the 4th King Jigme Singye Wangchuk.

In an effort to share this happiness with tourists, taxi drivers are kind and trustworthy. Like the dabbawallas of Mumbai, they have a formidable network across the country. You may be stranded without a hotel or meal on occasion, but you will never be without a taxi. There are no traffic signals in Bhutan, only traffic cops at a handful of crossings.

The highway from Pheuntsholing to Thimphu is a leisurely climb in altitude, among alpine forests, stark sunlight and intermittent fog. As we approach the university town of Gedu, the journey turns into a thriller movie. We drive through at least 45 minutes of dense fog with zero visibility. Our driver draws our attention to the popular turns and cliffs where cars have crashed or toppled over. Yet, he refuses to honk, even at hairpin bends. When we come face to face with another car, both drivers brake with a jerk and smile sheepishly at each other. Happiness is survival.

Our first glimpse of Thimphu is one of festivity. The streets swarm with dolled-up locals. The current King’s 35th birthday is immediately followed by Losar, the first day of the New Year for Tibetan Buddhists. This serendipity has led to a weeklong national celebration. The Bhutan International festival has taken over the Clock Tower Square, Changlimithang stadium and Centenary Park. This is Dragon Kingdom, and ornately carved golden dragons of the Clock Tower adorn the background as we watch a live dance-off between hip-hop groups with names like Half Dead Guys, Highly Dignified National Swaggers and Love n Hope. Lucky Ali will perform later that evening, apparently at the behest of none other than the King, a fan himself.

Jigme Khesar Namgyel Wangchuk is a befitting representative of the progressive and charismatic monarchy that has led the kingdom to democracy. The monarchy of Bhutan, like the nation state itself, is relatively young. Bhutan has had only five kings till now, the current king’s secretary, Sonam Tshering, tells us. The kingdom of Bhutan came into existence to fight the British, who were particularly interested in this region as a crossing point to Tibet. Small rulers came together under the leadership of the strongest among them, the Penlop (governor) of Trongsa, to fight the colonial threat. The kings of Bhutan are all descendants of the Trongsa Penlop.

Despite democracy, royalty enjoys the loyalty of Bhutan’s people. It is impossible to miss the royal couple framed on the walls of establishments and homes, and on merchandise like mugs, keychains, posters, even clocks and curios.

Nights in Thimphu are animated with Karaoke, clubbing and crowded bars. Tourists prefer the oven-fired pizza places, Aussie burger joints and Western-style coffee shops over the local cuisine, which isn’t designed for the faint of palate. Ema datshi, a local delicacy, is a preparation of solely chillies in a local cheese sauce, served with red rice. Betelnut and chillies are addictions in Bhutan, transcending age, class and gender barriers. Only a lucky few get to taste matsutake, a variety of mushrooms so prized, they even have a cultural festival dedicated to them.

Punakha, the erstwhile capital of Bhutan, is an antidote to Thimphu. A small and traditional town in comparison, its highlight is the Punakha Dzong, one of Bhutan’s heritage fortresses that house the administration, monasteries and the residential quarters of monks, besides showcasing traditional architecture and arts. We visit the Punakha Dzong on the first say of Losar. Constructed at the confluence of two rivers, Pho Chhu and Mo Chhu, a sheltered wooden bridge leads you to its gates. Locals have gathered to play the traditional games of Khuru (darts) and archery on opposite sides of the river.

Most tourists don’t venture beyond the traditional circuit of Thimphu, Punakha and Paro, all in western Bhutan. But we are here for something else. Before heading to Paro and the Tiger’s Nest Monastery, the most popular cover photo for guides on Bhutan, we take a detour. We go to the Phobjikha Valley in the hope of seeing black-necked cranes.

In winter, black-necked cranes migrate from Tibet to parts of Ladakh, Bhutan and Arunachal Pradesh. I am determined to see them this time. In the past, I had missed the cranes by few days in Ladakh and spent my time gazing longingly at their abandoned breeding grounds.

Unreliable information surrounds these cranes. It being the end of winter, some guides warn me that the birds have flown off. Rather than wasting our precious time and money to get there, they advise us to visit the Takin reserve near Thimphu to satisfy the urge to see this exotic species. According to legend, Drukpa Kunley, the tantric saint whose erection protects us from evil, crossed a goat and a cow to create a Takin, the national animal of Bhutan. Despite the forbidding signs (our permit doesn’t include Phobjikha, a guide didn’t see any cranes on his last visit, the centrally heated hotels are unaffordable), we decide to give it a shot. For good luck, we stop by at the temple of our patron saint, the Divine Madman, before we proceed to Phobjikha.

En route, we catch a glimpse of Jomolhari, the second highest peak in Bhutan. We take it as a good sign, like the melting snow, adventurous yaks and fur-laden dogs we come across. A glacial valley at an altitude of 3,000 metres, the Phobjikha valley is known for its extreme temperature, Gangtey Goempa and, of course, black necked cranes. The locals have lived in harmony with these migratory birds for centuries, letting them feed on their farms, as they do in the wetlands. The respect is mutual. The cranes, it is believed, encircle the Gangtey monastery three times on their arrival.

We drive into the valley to the sound of shrieks, a high- pitched cacophony of sorts. “The cranes!” I exclaim, only to be corrected by our guide. It is the sound of excitable men playing khuru on Losar. We walk through a forest of blue pine, birch, maple, rhododendrons and lichen, fondly called ‘the old man’s beard’ in Bhutanese. My heart skips a beat when I hear flutters amid the two-storey high branches. Strokes of black and white flash by. Ironically, we see more cranes on farms and in domestic compounds than in the forest or wetlands. Cranes linger on, foraging and arguing, oblivious to human attempts at delineating property. As soon as you approach them, though, they fly away. To appreciate them in their surroundings, one must be as still as a rock—else, you may miss out on the red blotch on their forehead entirely.

When we visit the official Crane Centre later in the day, we find an injured crane convalescing in a shed. Despite the instinct to run away from humans, the crane cannot move. It is restless, as unsure of us as we of this mighty bird, almost 5 feet in height and with wings that span 7 feet. We look at each other from a distance. We wish the crane good health and luck with all its journeys. And we continue with ours.