Indians know little about Papua New Guinea. New Guineans don’t know India either. Yet, why does much of its geography sound Dravidian? 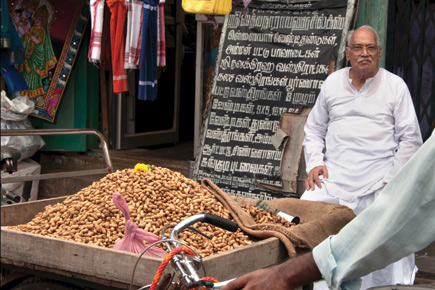 Why does much of the geography in Papua New Guinea sound Dravidian?


Almost everything modern, including geography, got air-dropped inside Papua New Guinea (PNG) when charters by biologists and miners first flew over the interiors of this country in Oceania in the 1930s. From up in the air, to when they landed, they stared at dark races unknown to the outside world. Almost 50 years later, when KVS Krishna travelled to this still-primitive country below the equator, to land in the capital Port Moresby, the last thing that he was expecting was Dravidian déjà vu. Yet, within days of his arrival, this schooled-in-Chennai visitor, whose mother tongue was Telugu, was stunned when he heard the familiar tinkle of Tamil 8,000 km from his home in this faraway land yet to be fully explored by man.

The first day when he met the company’s chairman Sivarai Domu, “I told him your name means Shiva Stone in my language,” says Krishna “and we laughed”. An experienced planter who had worked in Indonesia, Sri Lanka and Cameroon, Krishna had been invited by the National Plantation Management Agency to set up cardamom estates in PNG—a land blessed by 300 wet days in a year and 300 inches of rain which makes it a spice-growers’ utopia. While he’d hoped to get by with Pidgin English in this alien nation that had 750 indigenous languages, as he went deeper inland, he kept finding Old Dravida in New Guinea.

“I travelled to Goroka, through a hill gap called ‘Ashaloka’ to land at ‘Ramu’ Valley. We reached a Christian Mission called ‘Brahman Mission’. They handed me a land document called Bumi No 11. We kept passing towns whose names had Tamil meanings: Wau (come here), Karimui (blackface) and Keveri Hills,” he recalls. Even a place called Linga Linga, a word that soaked straight into the soul of this Shaivite. Other words, like erave (sun), nagam (snake) and pua (flower) sounded like shouts and whispers from the bazaars of Mylapore, Chennai’s cultural hub.

Even the surnames sounded like Dravidian descriptors with a Christian prename, John Kulala (short man), Tom Muliap (muli means radish or corner) and Nat Koleala (hen man). The parliament house was at Waigani (mouth intellect). When he met the vice-president of PNG, Rabbie Namalue, “I told him your name means you are our man in Tamil.” When he heard a man being called Kittappa, which means near-father in Tamil, and father-in-law in PNG, Krishna’s mind went into a spin. He was convinced that his Dravidian dictionary had an uncanny phonetic and grammatical resemblance to a New Guinean glossary. Spoken aloud, these words sound almost like ancient Indian incantations.

Linguists believe most of PNG’s languages have slowly died, without a script. So, how had this lexicon sprung up without any linguistic, racial or trade connection between India and PNG? Diplomatic relations were established only in 1976, four years before Krishna’s arrival. Yet when he met the premier of Madang, who loved chewing areca nuts and offered him a supari as we do guests in India, the honoured New Guinean thought Krishna had gone native.

Krishna’s primary purpose was to grow spice in this country that had missed the Bronze and Iron Age and major inventions like the wheel, pottery and woven cloth. His immediate focus was air-lifting cement, sand and bricks for building factories. He lived seven years in this planter’s paradise, where tea registers the highest yield. He recalls, “We got 1000 kg of cardamom per hectare and four times the amount of coffee than we get in India.” All this, while some natives still lived as naked apes, used stone tools till the 1980s, and cooked food by digging holes in the ground. When George Rosario, the first plantation manager, grew a jackfruit tree to remind him of Kerala, the workers called it pig-fruit.

After Krishna returned to Chennai in 1990, this self-professed “map minded chap” spread out his New Guinean atlas. His table-top survey almost knocked his vest off. “Almost 20 per cent of the towns and districts had a Dravidian connection (Tamil, Telugu or Sanskrit), even the telephone directory had about 50 Tamil surnames,” says this 76-year-old whose voice is now slightly frail, but whose memory is still sharp and inquiring.

One connection may have been a coincidence, but not over 300 names that encompassed political and physical geography in terms of towns, rivers, mountains and even animal names? Krishna was certain there had to be some missing cipher to New Guinea’s nook of records. Unlike everywhere else, where they had mutilated names of towns, the British and Australians allowed ancient names to endure in PNG (unlike in Australia where Aborigine names were near erased). And while many of PNG’s languages had died out without ever having had a script—road signs, land maps and town certificates in English continued to point out the hoary past. Only Krishna could see the light of meaning. “Having lost their languages, the Guineans didn’t know the meaning of these words anymore,” he says.

In nearby Indonesia and South Asia, shipwrecked aspects of ancient India glide by and hit you like flotsam, like when you hail a cab for places like Ram and Erawan (brother of Ravana). But the language of PNG predated India’s epics and The Ramayana. They are pre-Harappan or proto-Dravidian. To study the genesis of this geography, Krishna travelled back in time, trammelling through geological events, evolution and mapping the first migration of man. Early this year, after 20 years of research, this one-time botanist and full-time hobby historian looked up from this computer muttering, “Maybe genes won’t lie.”

Having excavated history from language, Krishna made a PowerPoint presentation to the Tamil Nadu State Department of Archaeology in February 2009. In it, he traced the migration of man out of Africa about 80,000 years ago into India, some 20,000 years after the larynx developed in the modern man. He also said that these men lived in India before moving on to PNG and Australia, carrying the language that had crystallised here. Some of these are cognate words, such po (go), as they still say in Tamil and in PNG.

Kalvettu, the official journal of the TN State Department of Archaeology, published his paper last year. His observation does have some resonance. The Central Institute of Classical Tamil is exploring the linguistic, cultural and anthropological affinities between Tamil/Dravidians and Australian Aborigines. PNG and Australia were connected landmasses until they were separated by the shallow Torres Strait.

Krishna is aware it’ll take more than sound understanding to get to the genesis of Dravidian geography. “Who knows if this is coincidence?” he says, making light of his years of research. But you can tell from his voice he’s hoping it’s not. That perhaps palaeontologists, archaeologists and anthropologists will uncover the missing links. He is still holding on to visiting cards of men like John Kalula. Krishna wants to reach out to his ‘short man’ once there’s some confirmation of their long lost brotherhood.