No Freedom from Shivaji 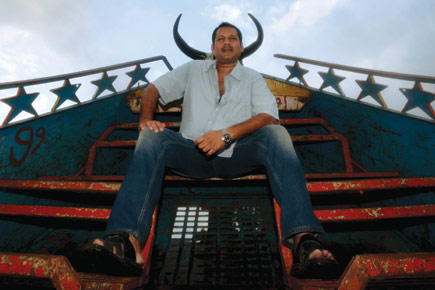 
In Maharashtra, Chhatrapati Shivaji is more revered than all humans and most gods. Every politician has to bow at his feet. Any uncomplimentary reference to him, even if it is in the way of academic research, would result in controlled arson and damage to public property. In fact, once when an Orkut group carried derogatory remarks about the king, the Shiv Sena’s goons wasted no time in deciding how they must retaliate against the Internet. They vandalised cyber cafes. So many roads, parks, institutions and buildings are named after Shivaji that it may seem as if there is no other worthy name in Maharashtra. A giant, financially obtuse statue of the king that will be taller than the Statue of Liberty is proposed in the Arabian Sea. So, how must a man feel to be the 13th direct descendant of Shivaji?

To begin with, Shrimant Chhatrapati Udyanraje Bhosale cannot speak his mind. He has to weigh the consequence of every word he utters before he opens his mouth. Everybody around him, and even those who are not around him, have a definite idea of how a direct descendant of Shivaji must conduct himself. It is not surprising then that 38-year-old Udayanraje is a man of few words. He cannot laugh out loud, or smile at everyone he meets. He has to restrain his fashion sense; he cannot be too daring. Though he loves eating out, he cannot do so. He has no close friends in Satara, which he has to accept as his home. It was from here that his ancestors once ruled for centuries. He has to behave as expected. “A commoner has more personal freedom than me. People expect me to behave like royalty. They feel offended if I do not live up to that expectation,” says Udayanraje, loosening his habitually stiff shoulders.

He is in a hotel room in Satara. He is over six feet tall. He has brown eyes. His feet, right now, are naked and his long legs are stretched out. By his standards, he is relaxing. His sentences, though, are carefully crafted. Occasionally, he drops his guard.

Udayanraje is aware that his life is a “double role”. Since the day his father died and he, at the age of ten, took over the reins of his legacy, life has only been about compromises. As he assumed the role of king, the fun days at Doon School and later, at Pune’s Fergusson College became a blur. He has studied Production Engineering and Industrial Management but never had a career. It was inevitable that he would join politics. He is a sitting MP for the Nationalist Congress Party from the Satara Lok Sabha constituency.

“I am an extremely reserved person in Satara. Here I am Udayanraje, which comes with its own responsibilities, duties and curbs. Outside Satara, I am Udayan, free spirited.” He waits for weekends when he can drive away to neighbouring Pune in his off-white Porsche Cayenne. In Pune, he connects with his close friends. And drinks. Though he loves his alcohol, he was unwilling to discuss the subject or even mention the names of his favourite brands as he was nervous about how his statements would be perceived. “I love life in the fast lane but that is outside Satara. Here, even if I am in the slowest lane, it’d still be too fast. Forget about sharing a drink with someone in Satara, I can’t even talk about it,” he says with a smile.

He has a perfume fetish. His favourite brands include Cartier, Ralph Lauren, Salvatore and Davidoff. A bottle lasts him less than a fortnight. But he wears perfume only when he is outside Satara. In Satara, he tries to smell like anyone else.

In his Doon School days, Udayanraje had dreamt of becoming a professional car racer. Then his father passed away and he could not have playful ambitions anymore. Now he gives in to his passion during weekend trips along the highway connecting Pune and Mumbai. “When I was called back home after my father’s death, I would cry myself to sleep. The restrictions became constricting. When I told my mother that I wanted to do professional car racing, she pointed out that due to my lineage, I had certain responsibilities towards the people. I could not run away from it. I gave up my ambition because my mother told me that people would be disappointed if I did not live up to their expectations.”

From that day, he started leading a double life. In Satara, he is a sober scion of royalty. On the highway to Pune, he is a race maniac. Every minute outside Satara is precious to him and he tries to make the most of the freedom. Outside Satara he is a fan of Dire Straits, Enigma and Deep Purple. He loves to party and he does it with a vengeance. His close friends are not overwhelmed by his blue blood and so he is unguarded in their presence. (But he is a poor dancer. He has learnt some steps though.) Away from home he also grants himself the freedom to explore all kinds of restaurants. He gorges on missal paav from small eateries and has tea from open tea stalls, a privilege he is not allowed in Satara. He says that every time he drives home to Satara from Pune, he is not so fast. And he is filled with the desire to turn around and drive back to Pune. But he always completes the trip. He always reaches Satara.

A couple of months ago, when he was driving through his constituency, he came upon a popular missal paav joint. Unable to hold himself back, he parked his vehicle and walked into the modest eatery. Everyone there was shocked to see him. The place fell silent. Even whispers died. “The owner ran to my table. I asked for missal paav. Since everyone was looking at me, I quickly finished and left. I do not even remember how it tasted. I am constantly under surveillance; it takes the fun out of my life.”

He is known to be popular among women and he has a closely-knit circle of female friends. Not in Satara, but outside his kingdom, in the world where he can be like any other man. With a twinkle in his eyes, he confesses that being surrounded by women and as a consequence feeling the stabs of male envy, makes him feel “nice”. The married prince says that he would be lying if he said he does not feel attracted to women. But, “you should know when to draw the line.” Flirting is easy for a prince, but he says if a man is not careful he could get hurt, he might lose the love that really matters to him. Referring to someone vaguely, he says a bit thoughtfully, “Sometimes you think of the person who was once in your life and you wonder where she is. Just knowing that she is happy gives me a high.”

He is married to Damayantiraje, a blue blood herself. It was an arranged marriage as Udayanraje wanted a wife who matched his royal background. Like her husband she, too, leads a double life—the coy princess in Satara and the Page 3 circuit hopper in Pune. She is a fashion merchandiser and has a sprawling designer store, Araliya, in Koregaon Park, an upscale address in Pune. She has also walked the ramp in Pune for Shaina NC’s creations. Like her husband, Damayantiraje, too, loves to party. But she was not always this way. She was introduced to the high life after her marriage. “I wanted a wife who understood life in a royal household,” her husband says. “ It is not easy to live in Satara but our life is here. My wife must understand her role and be prepared to take it head on.” However, outside Satara, he wants his wife to be the toast of the town. She has adapted to the jet-set life of the Page 3 circuit like fish to water.

The couple has a five-year-old son, Yuvraja Veerpratapsinhraje Bhosale, who will take over the responsibilities of the lineage after Udayanraje. The boy is being groomed to accept the double role.