My Vote for Pluralism

There are multiple ways of being human, being religious among them, that rationalists fail to appreciate 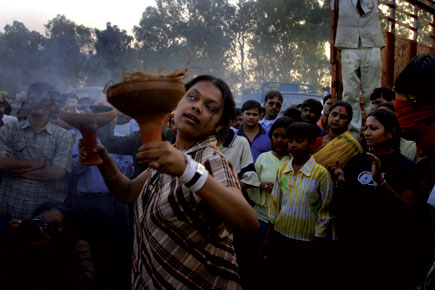 There are multiple ways of being human, being religious among them, that rationalists fail to appreciate


On one issue, there is no doubt. If there was a murder most foul, it was Narendra Dabholkar’s. The slain leader of the Maharashtra Andhashraddha Nirmoolan Samiti was, by any measure, a well-wisher of the people.

He was a strong supporter of inter-caste and inter-religious marriages. For decades, he had been fighting an unwavering war against ‘black magic’ practitioners and had ruined the business for quite a few. Threats to his life were ever- present. It is thought that the recent airing of his views endorsing inter-caste marriages finally did him in.

A doctor by training, Narendra Dabholkar cut his teeth in rural social service with another doctor-turned-activist Baba Adhav during the Ek Gaav, Ek Panavtha (One village, one pond) movement.

What set Dabholkar apart from many atheist-rationalists is how deeply he involved society—not preaching from above, but militantly conversing with people at large. He earned his legitimacy by living an exemplary life. The widespread shock and anger on his murder points to that. Urban rationalist talking heads might learn a thing or two from his life before complaining for the umpteenth time about how ignorant most people are. During his lifetime, he was painted with partial success as someone who was anti-religion. That view also has serious currency. It is important to examine why.

Dabholkar led a movement against the deleterious environmental effects of divine idols. Water pollution was the holy cow that was used to elicit a court order banning certain kinds of idol-making substances in Maharashtra. Is that being anti-religion or anti a particular religion? Who knows? But placed in the context of a world where people see the large-scale polluting and choking of rivers, lakes and other waterbodies by industrial effluents going unpunished, this particular focus on water pollution caused by idols does carry a charge that attracts attention.

What conclusion should idol-worshippers draw who see plaster-of-paris idols banned and other kinds of water pollution left unchecked? Believers are not stupid.

It is not a coincidence that nearly all self-styled rationalists or ‘magic’ busters of the Subcontinent are also staunch atheists. A stupendous majority of its people are not. However, in preaching rationalism, preachers usually either downplay their atheism or conceal it. They say they are not against religion but superstition. Believers can identify such patronising doublespeak. They are naturally left unimpressed by those who claim to be sympathetic do-gooders but actually give two hoots for people’s beliefs and viewpoints.

The grand failure of such atheist/rationalist projects, in spite of having the full weight of India’s Constitution behind them, also has to do with the patently alien idioms of communication and propaganda they use. That rationalist propagandists themselves are often alienated from the currents of their own society does not help matters.

When a minuscule minority aims to scare, browbeat and threaten people of faith by trying to get legislation passed that criminalises a set of practices they voluntarily submit to, what we have is the naked use of privileged access. This privilege follows the usual path of undemocratic access in India: urban backgrounds, English education, Delhi connections, friends in the media and so on. Every time such legislation is passed, it undercuts democracy—for, in spirit, those who enact it seek to act as a council of wise elders running roughshod over the beliefs and opinions of people at large.

It may befit sociopaths to assume that the masses are either imbeciles or juveniles, or easily manipulated in their darkness.

It is hardly the ideal characteristic of a democratic society where every individual is a moral agent with as much intelligence and responsibility as the next.

In the absence of empathy and respect for differences—the basis of a harmonious society—we have an elitocracy. When urban rationalists shamelessly clap for ‘anti-superstition’ bills that few people would okay in a referendum, they often let slip their mask of false empathy and democratic pretense. They can afford to do this as throwing stones at glass houses faraway has always been a non-risky affair. Some excel at this. It is in the context of this snooty way of looking down at and talking down to the unwashed masses that Ashis Nandy, the shaman of our times, had said, “There are superstitions and there are superstitions about superstitions.” Others choose to work among the people and live—and some, like Dabholkar, unfortunately die—with the consequences of their actions.

It is this latter group of rationalists who have won some popular legitimacy.

In some ways, the work of rationalists should have become easier with the rise of textual religion in many parts of the world, including the Subcontinent. The level of canon literacy that exists now among believers is truly unprecedented. But adherence to text also pins down belief, making it vulnerable to the kind of tactics that rationalists use to expose ‘magical’ practices.

Ostensibly, contradictions between a certain belief and empirical reality can be shown up more easily now that scriptures and canons have assumed an immutable form. For example, followers of scriptures that claim a flat earth, or that the sun revolves around the earth, are ripe for engagement as part of a rationalist campaign against ‘blind-faith’. Rationalists have failed to do even that.

However, rationalists do not win friends by reminding believers that the development of a ‘scientific temper’ is one of the ‘fundamental duties’ of a citizen according to the Constitution. Nor does this attitude help develop meaningful ways of engaging society for their cause.

This failing is compounded by popular notions that such ‘juktibadi’ (rationalist) types even look and act in a certain way. That they are no different from other posturing social types like the faux-Westernised, body-art loving ‘rebellious’ yuppies of the post-liberalisation era, or the bearded jhola-chappal-jeans attired Communists of the same era. That some rationalists boycott all social occasions that observe religious rites—such as marriages and funerals—does not aid their social immersion.

Lived religion, like any other aspect of human life, is not insulated from a changing world. Religion is not what it used to be, and that is how it has always been. Religion has also taken up characteristics and props of this age of mass production of material goods, easy transport, mass media and increasing literacy in a few dominant languages.

The peculiarities of this age put their stamp on religion to create bizarre products that are as much characteristics of the age as they are of the religion that consents to such corruption. In a way, that is how religion has always ‘survived’ in any meaningful sense of the word. However, to use the specific peculiarities of an age to paint religiosity or practices in general as a timeless evil is neither honest nor tactically smart.

Constitutions and new ‘values’ that disappear almost as soon as they develop cannot and should not speak down to faith. This point becomes especially poignant if one quotes Karl Marx out of context:

‘Religion is the sigh of the oppressed creature, the heart of a heartless world, and the soul of soulless conditions.’

Let me make a final point. What it is to be human is a question that is hard to answer, but a significant portion of the world population (including this author) believes that there are multiple ways of being human. Faith elements that are non-textual, that are handed down in communities, that mark their presence in myriad practices (some of which may qualify in rationalist-speak as ‘superstition’) also contribute to the multiple ways of being human. These ways come with just as many worldviews, theories and practices: to what extent are they separable from one’s special sense of self and identity?

Religions, gods, goddesses and other beings, insofar as they are responsive to the changing world and living communities with which they are in constant interaction, also change. Being a certain kind of Bengali, I grew up in the thick of brotos (practices to receive divine blessings) and many other traditions from which my particular kind of ‘Bengaliness’ is indistinguishable. The gods and goddesses of my Bengaliness, Ma Durga, Ma Monosha (often vulgarised offhand as a ‘snake goddess’), Dhormo Thakur, and other divinities who inhabit its fringes like Ma Shitola and Bono Durga, and the practices and ‘superstitions’ associated with my accident-of-birth particulars constitute me as a person in no small way. This Bengaliness is not a static thing—static not even in a lifetime.

Faiths and gods continue to communicate with and adapt to the changing world their adherents inhabit. When some gods cannot adapt, they die too. An earlier time would have produced a different notion of selfhood in me.

Without this scaffolding, what kind of human would I be? Some may have no need of such things, but what about the rest of us? What does the absence of a particular scaffolding look like anyway? Why do those who ask us to leave such things appear so much more similar to one another? What about those who have a stake in the intrinsic plurality of the human condition and think it is worthy of preservation—where would they stand if such homogeneity were the cost of an atheist-rationalist worldview? In post-colonial societies, the anti-traditionalist worldview can be received wisdom as much as any other tradition. Such a formulation might hurt the bloated egos of those who think that university departments and wistfully imported and badly digested bits of European post-enlightenment thought elevates them vis-à-vis their fellow people, seen as haplessly ignorant. Make no mistake; the hapless also have a theory about those who hold them in contempt.

Till ‘rationalism’ finds a way of preserving and strengthening the plural ways of being human that societies believe they have produced in cahoots with their gods among other things, it does not have my vote. An imported version of the universal brotherhood of man—something that some curious residents of the tropics always take to with more zeal than the West itself ever did—is a cheap replacement for the loss of a million gods and a billion ‘superstitions’.