Marching with Pride in Chennai

Chennai, considered by many to be a very conservative city, saw its first gay pride parade on 28 June 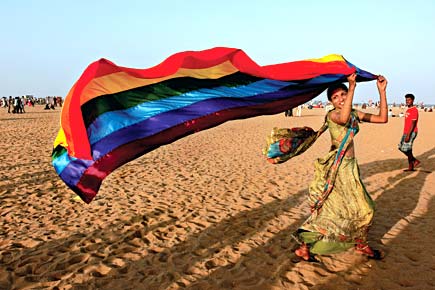 Chennai, considered by many to be a very conservative city, saw its first gay pride parade on 28 June


On 28 June, the rainbow colours of gay pride were unfurled in Chennai, considered by many to be a very conservative city. A huge crowd of gay and straight people marched in support of lesbian, gay, bisexual, transgender rights and protested against section 377 of the Indian Penal Code, an obsolete law whose interpretation deems homosexuality illegal. Not surprisingly, there were many gawkers.

Pravin, an NRI with roots in Bangalore and Chennai, was one of the homosexuals participating. He was wearing a mask. When this reporter asked why he did so on a day celebrating homosexual pride, he said: “You know, everyone falls somewhere between 1 and 6 on the Kinsey scale of sexual preference.”

Interesting, but that still doesn’t answer the question. He said, “Frankly, I’m not here to answer your questions. Or anybody else’s. At least, not today. Today, I’m here to remind the world that you have no right to question our sexual preferences. It’s our fundamental right.” Beside him stood his sister who was not gay. She was holding up a sign that declared, ‘Straight but not narrow’. She, too, was wearing a mask.