Learn as You Will

Some parents do not send their children to school because they believe it is a destructive concept. These kids pick up things as they grow up talking to animals, running freely through villages and observing the whole world around them 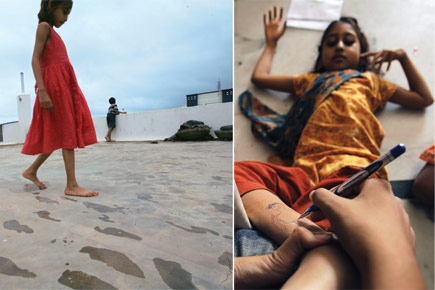 Meet the parents who have decided to rid their children of the “destructive influence” of schools.


Sunday is nothing special for seven-year-old Kanku. Her parents, Manish and Vidhi Jain do not send her to school. They also decided against home schooling.

Kanku’s parents are among the few in India who have been inspired by the philosophy of ‘de-schooling’, which aims at de-institutionalising the individual. Manish says the factory schooling system works to suppress all uniqueness in children and mass-produces humans fit to be recruited by a world that is run on deeply flawed economic beliefs. Manish looks at the natural wisdom and unbridled imagination of children as a fragile natural asset on which contemporary schooling superimposes the mediocrity of uniform thought.

“Learning is as natural as breathing, it happens as we go along,” says Chandresh, a family friend and parent of two vibrant kids who are undergoing de-schooling. “A school unnaturally divides our day into learning time, food time, playing time. Even prisons and factories are based on regulated time schedules.”

Manish and Chandresh have given their children the freedom to create their own learning spaces. Vidhi says Kanku has not shown much interest in reading and writing. She is keen to cook, play with animals, be amidst nature and is currently enamoured of weddings. She loves dressing up and wearing make-up. She pays attention to her appearance and body lan­guage, carrying her chunni with the grace of a heroine. She sometimes refers to her parents as groom and bride.

Kanku is encouraged to visit artisan workshops, organic farms and the alternative education centre run by her father. But the ultimate decision on what she would like to learn, from whom, where and when, rests with her. When Vidhi decided to live with a village artisan to learn more about natural colours and dyeing, she didn’t have to think twice about taking Kanku along. “I knew Kanku would love to dig and dip into them. But for the three days that we were there I think Kanku must have spent only two to three hours in the workshop. She made friends and was roaming by herself in the village. She was happy to run from one house to the other asking for buttermilk, lambs, mehendi [henna] and lahengas [girls’s dress]. By the end of the second day, most of the villagers knew her.”

Children have a natural confidence that is often destroyed by excessive instruction, believes Chandresh. When Ajanmaya, his younger son who is five, began to play with a knife at two-and-a-half after seeing his parents cut fruit, they resisted snatching the knife away from him. “He scratched himself a few times. But now he cuts his own fruit,” says Chandresh.

Most parents believe that children must not be exposed to grim realities like death, but Vidhi believes that when a real life situation has to be faced, it needs to be shared by the whole family, including children. Kanku was six when her great grandmother passed away. She was part of all the mourning ceremonies despite the hesitation of relatives. When the body was taken away for cremation, relatives tried to distract Kanku with toys but the girl sat with her parents and grandparents, wiping their tears.

An American citizen, Manish Jain lived the NRI dream before moving to India. With a masters degree from Harvard University in education planning, policy and media under his sleeve, he went on to work on Wall Street as an investment banker. He also worked in Washington on interna­tional education policy. Eleven years ago, Manish decided to reverse the family’s migration. “I survived the horrors of suburban American life, the high point of which was going shopping to malls and drinking with friends. It was lonely. It was alienating. To live in a flat, too scared to talk to strangers.”

Manish returned to his native Udaipur to set up Shikshantar, where new ways of education are explored. Manish, who could watch seven to eight hours of TV every day and drink gallons of Coca-Cola, has now given up even tea. Although de-schooling is a concept introduced by American thinker Ivan Illich, for Manish, de-schooling is similar to Mahatma Gandhi’s concept of Swaraj. “Very few know that Gandhi was also a great critic of modern society,” he says.

“I don’t want to go to school, they hit children there. I want to teach myself, like Kudrat,” Kanku announces in a conversation with Panna Lal, an organic farmer. Kudrat is Chandresh’s nine-year-old son, who is also being de-schooled. Kudrat considers himself gifted because he can do a thumb dance, bend his elbow the other way and has an enviable store of riddles. He travels all over India, sometimes without his parents, escorted by other adults and has learnt to look after himself. When he has an upset tummy, he opts for bananas. If that doesn’t work, he skips a meal. He invents games and creates storybooks for entertainment. Since he hasn’t learnt writing yet, he requests others to write down the dialogues, which he diligently reproduces in his book. He has learnt to grasp the symbolic nature of language, and can sense the meaning, if not the exact words. He is good at assessing his cards while playing Uno, and strategising. And he’s a great dramatist, bursting into one-man shows at the drop of a hat. Little wonder that Kanku has chosen a boy like him as her role model. She knows he is different.