A surprising number of recession-hit IT professionals in Bangalore are rebooting their careers by starting their own restaurants. 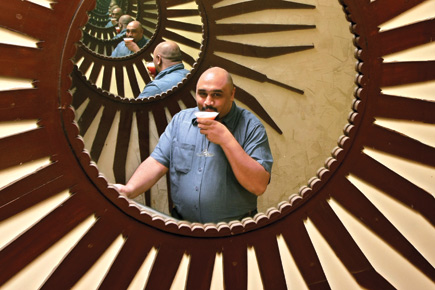 A surprising number of recession-hit IT professionals in Bangalore are rebooting their careers by starting their own restaurants.


Ankem Srikanth is between jobs. That’s pretty common this season in the desi Silicon Valley where high attrition rates and the US recession have hit the industry hard. Srikanth, though, is no recession victim. He’s chucking up his full time, high-paying tech job of ten years to start a restaurant business. By the look of it, his must be the most popular career switch going in Bangalore.

Rajnikanth Manchi and Ashok Dantomsetti have opened perhaps India’s only speciality dimsum restaurant. “We know we are ahead of the times as people are not yet ready to accept dimsum as a full meal. But we are going to be the catalysts of change,” the duo chorus at their curiously named Ping restaurant in upscale Koramangala that opened last August.

Srikanth, a developer at an infotech firm that lends its intellectual property rights to multimedia companies, has decided to call it quits and enter a new domain. He will be heading a hotel chain that is being set up by an infotech entrepreneur whom he doesn’t want to name. “The registration is in place, so are the trademark and logos. We are starting a chain of theme restaurants centering around Indian pure vegetarian food, coffee shops, international food and pubs that would serve beer brewed on the premises. We hope to be in business by March,’’ says the 35-year-old, who spent all his working life in tech labs designing new products on the Developer Service Provider platform.

The company is looking for an all-India presence, though the first five to ten outlets will be financed completely inhouse. “We will run the concept successfully before looking for venture capitalists, as investors always put you off by saying IT guys cannot run restaurants. It’s not the right thing to say as we are already running an IT business,’’ reasons Srikanth.

The global economic downturn did not deter them from setting foot in the restaurant business. In fact, it’s actually helped them as the cost of inputs is much lower than last year when labour was expensive and real estate prices were up, up and away.

Manchi, 32, and Ashok, 34, set up Ping after considerable research. An engineering graduate with a post-graduation in management, Manchi says he is fed up with the poor quality of food while eating out and had decided to set up a restaurant in his ‘bachelor’ days itself. “It’s been a long-time ambition as hoteliers lack consistency,” says Manchi.

Having worked with a private bank and later with HP and Sun Microsystems, he was the first salaried person in his business family. “As I had business in my blood, the restaurant bug bit me. I have a fascination for food and when I found out Ashok shared my aspiration, we started to think about the venture seriously. After lengthy debates and substantial research on what kind of restaurant we should open, we zeroed in on a dimsum speciality restaurant simply because no one had ever tried it before. Italian or Bengali food is costly while Punjabi and Chinese is very common and has lower margins.’’

The duo found a collaborator in Sarfaraz Ahmed, Manchi’s collegemate and a risk analyst based in Singapore. Together, they borrowed money to set up Ping. It’s been just a few months that Ping opened, but they have already decided to start some more dimsum restaurants.

A starter dish, dimsum originated in Canton and has various meanings. One is a Chinese phrase meaning ‘touch your heart’ or being ‘light-hearted’. While it looks and tastes like momos, Manchi cautions that while all momos are dimsums, not all dimsums are momos. The filling inside the dimsum is called ‘ping’, which also means something of the highest class. And in tech speak, pinging means messaging.

The plan is to break even in 7-8 months. “We are here for the long haul. Our idea is to open a chain of restaurants nationwide. We have put our heart and soul into this brand and its going in the right direction as people come in due to word-of-mouth,” they claim.

The 84-seater restaurant is housed in a converted bungalow. They don’t serve liquor yet, but they have a separate dessert bay to attract students from a nearby girls’ college.

“We have no regrets about chucking full-time jobs and getting into something unknown. We are learning here, and as management students, our aim is to make money,” they say in unison. This, despite being aware that this is a business where the shut-down rate is very high.

Plunging headlong into new territory is something that didn’t worry Madhu Menon too much either. A self-confessed foodie, he has wanted to start a restaurant since he was 13. When he was in school, when visiting mamas and maamis asked what toys they could get him, he would always ask for cooking catalogues, especially from the UK. “I am still fascinated by them,” he says, laughing.

After the dotcom crash in 2001, Menon took on a few consultancy jobs and worked from home. That was the time he would cook for his guests. A compliment that he should start his own restaurant got him thinking seriously about the idea. He began researching in earnest for a product that would sell. Back in 2003-04, as there were no restaurants serving southeast Asian food, Menon knew he had to start one. “My dad was very supportive. I was prepared to stand and cook myself as all my savings were invested in the restaurant idea. That’s how Shiok, a fine dining southeast Asian restaurant with a price point below that of five-star hotels happened. I am a trial-and-error cook, and to this day, I don’t mind stepping into the kitchen if the chef is on leave,’’ says Menon, who studied computer science in Australia.

Before the restaurant bug bit him, Menon worked with software companies and media houses handling technical jobs in designing and web solutions. But he has no regrets swapping a well-settled career going in the right direction despite the current recession reducing the number of visitors to his restaurants. How does he compare the two profiles?

“I don’t think what I was doing previously and now can be compared. The restaurant business is tough as we are open through the year without a break. There is very little down time and every day throws up a new challenge. Man management is very important here whereas in a software company, people work in teams and shifts to achieve a common goal.”

Menon insists that being a restaurant owner does not mean a glamorous lifestyle. “I don’t hang out with the page 3 people. I have enough on my hands to keep the places running.”

Two months ago, he started Moss, a cocktail-based lounge bar on the first floor of his restaurant on Intermediate Ring Road, a stone’s throw away from Bangalore’s largest concentration of ITeS parks.

Moss notwithstanding, he’s in no hurry to open more branches across the city. “I am a quality conscious guy and believe in doing the best in whatever I do,’’ is his motto.

Quality comes first for Pallavi Gupta and her husband Gaurav Jain too, but unlike Menon, they are big on expansion. How did they start? One fine day, the couple simply decided to quit their jobs in Wipro and launch the Indian answer to McDonald’s. They were living out of suitcases across continents, pining for good old home-made food. That’s when their Mast Kalandar chain of pure vegetarian north Indian restaurants was born.

After test-marketing the concept of ‘healthy, hygienic north Indian food’ in a cramped tiny shop on Bannerghatta road in 2005, they have expanded rapidly, especially in the last two years. Today, they have 11 outlets in Bangalore and one each in Chennai and Hyderabad. Two more are ready to open their doors in Bangalore this January. And there’s more to come. The ambitious couple wants to take their idea to all the cities in India, and is actively looking at setting up some across the seas.

Why Mast Kalandar? “It’s derived from a Sufi name that denotes cheer, fun and celebration,’’ says Pallavi. Both engineers and B-school graduates, they decided to shift tracks after working five-six years in the infotech industry. “We were very sure we never wanted to be a one-store wonder. We scaled up after one-and-a-half-years. A venture capitalist from the US liked our concept and we rapidly expanded. We want to open 200 stores all over India and abroad.’’ And to think they learnt on the job and are the first restaurateurs in their family.

Working with low margins has never been a problem as all their offerings are priced below Rs 100. The restaurant is open only during lunch and dinner hours. “We believe value for money, uncompromised quality and a clean environment bring more customers,’’ says Pallavi.

There are others too. One techie who quit his job and opened a restaurant did not want to be named, as his partners are not from the ITeS industry. “It’s their baby and I’m just a partner,’’ is his reasoning. But the real reason is that he is still working with an infotech firm. Another developer has opened a paratha joint in his wife’s name. “If all goes well, I plan to quit and open more restaurants!” he says. It’s a chance to not just smell money, but perhaps also make it. And opt out of the computer mouse race.