A low-cost alternative to incubators promises to save hundreds of thousands of infant lives in the poorest regions of the world. 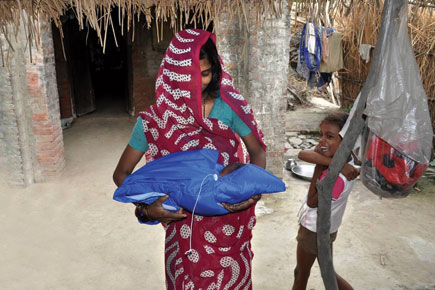 Here is a sleeping bag that gives underweight infants a chance at life.


The small blue sleeping bag looks like something one could bundle an infant in for an early December morning walk in Delhi’s Lodhi Garden. It may just be a little bag but it was powerful enough to make Hollywood actor Ashton Kutcher tweet about it on his Twitter profile. The Wall Street Journal, USA Today, MSNBC and various blogs and local papers have all carried stories about this blue bag.

This deceptively simple, small blue sleeping bag made of a special phase-change material promises to save 100,000 low-birth-weight babies in India by 2013 and decrease incidence of adult illness in 800,000 cases. Called the Embrace Infant Warmer, it is a low-cost alternative to incubators, extending the reach of infant health care in the poorest regions of the world.

“Technology is for use by people”, says Dr Rahul Alex Panicker, co-founder of Embrace. “It is a means of implementing a solution. We just need to ask the right questions.”

Rahul hails from Kerala, grew up in Kuwait, is an IIT-Madras alumnus and has a PhD from Stanford University. His is an inspiring story of entrepreneurship combining the efforts of an Indian from Kerala, Jane, Chen (Taiwanese-American), Linus Liang (Chinese-American); Naganand Murty (from Mumbai) and Razmig Hovaghimian (Egyptian-Armenian). Their common mission: saving 100,000 low birth-weight babies in India by 2013.

Rahul, Jane, Linus and Naganand met at Stanford University where each was a graduate student in a different discipline: Rahul working at a PhD in electrical engineering, Jane and Razmig doing MBAs at the Graduate School of Business (GSB), Linus an MS in computer science, and Naganand an MS in management science and engineering. As part of a course they took at Stanford’s Design School, their team was asked to work with an NGO partner. Design that Matters, a Boston-based non-profit group and Medicine Mondiale, an NGO working in Nepal, wanted them to build a low-cost incubator.

“The NGO partners did not take the project forward as we had hoped. They wanted a cheaper version of existing baby incubators; we gave them a sleeping bag,” chuckles Rahul.

The team was now left with two choices: to press forward with the infant warmer or find high-paying jobs in Silicon Valley. The ambition to make a difference won.

The team started entering entrepreneurial contests in the US to see if their idea would pass muster with seasoned entrepreneurs. Their success surprised them. They won the prestigious Echoing Green Fellowship (one of 19 ventures picked from 1,500 worldwide) and the coveted Stanford Social Entrepreneurship Challenge, 2008. This gave them the confidence and preliminary funding to move ahead.

Rahul quit his job at a fibre optics company earlier this year to take Embrace forward. Jane Chen and Linus Liang joined his start-up as well.

Embrace’s research revealed that 3.5 million newborn babies died across the world every year—up to 90 per cent of these in rural areas in the developing world. Also, 20 million babies across the world were classified as ‘low birth weight’. A third of these were born in India and about half were hypothermic. Such infants needed to be kept warm, a task performed in hospitals by baby incubators.

The problem was, Rahul says, the neo-natal intensive care units (NICU) or incubators needed for this task cost $2,000 to $20,000 and were high maintenance. Even if they were procured, there was lack of technical expertise to repair them. And, these expensive machines could only be procured and maintained by better-funded hospitals in urban areas, while their immediate necessity was more pronounced in rural areas.

Embrace decided to build a low-cost incubator based on Kangaroo Mother Care, that is, uniting mother and child by encouraging skin-to-skin contact to reduce post-partum trauma to both.

Their ‘Warmer’ costs less than $100 and is tailor-made to function in conjunction with local sensibilities. It works with or without electricity. In the non-electric version, a layer of wax emits latent heat when warmed with a glass of hot water.

“Infants cannot shiver due to lack of fat and insufficient muscle mass. Consequently these babies grow up to be sick adults susceptible to various diseases. The market is crying out for a solution,” adds Rahul.

Embrace is today registered as a self-sustaining non-profit unit. This choice was made since the team did not want to be held back by any profit-making motive. They are currently perfecting their distribution networks in India and communicating with state governments, healthcare NGOs, pharma and medical instruments companies and individual clinics and hospitals in urban and semi-urban and rural areas. The launch is planned in India for early 2010 and the team is in a penultimate testing stage for the product.

Embrace has received emails from countries in sub-Saharan Africa, Palestine, Peru, India, Hungary, Thailand, Egypt and Nepal asking for the warmers. Rahul believes that the overwhelming desperation of these everyday emails keeps the team efficient and productive.

“This is also a story about women’s empowerment,” says Rahul, “There is much social stigma attached to losing a child. Mothers love the product everywhere. They instinctively know babies need to be kept warm.”

The team, however, has faced its share of naysayers. Rahul’s voice gets a little edgy as he says, “I have often been asked by economists and other people why we want to bring more sick babies into the poorer regions of the world?”

“The first time I was asked this question I was shocked. How could someone ask this? Now I say there is a rational answer and an emotional one. The rational answer is that only a small fraction of low-birth weight babies die. Many grow up to be unhealthy and have an increased risk of type II diabetes and obesity. If they have an intervention at birth, there will be positive health outcomes for society… But saving sick babies and improving their chances of survival is one part. The long-term impact is a reduction in population growth. If a baby’s chances of survival are high, families will not produce more infants. Population will go down, not up. The emotional response is—if you had a baby that was low birth weight, would you not want to save it?”

(For more information on the product one can refer to embraceglobal.org)