It is expensive and time-consuming, but road cars are borrowing from Formula 1 technology to make your commute zippier. And then there is the reverse transfer of technology—road cars are ahead of race cars in many areas and F1 has to catch up. 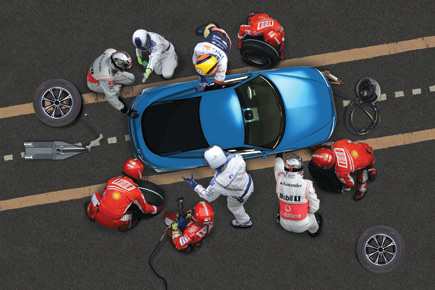 It is expensive and time-consuming, but road cars are borrowing from Formula 1 technology to make your commute zippier.


When Rishabh Bhandari watches a Formula 1 race, he’s really not interested in who’s going to win. The 22-year-old is a final year student at IIT Bombay who headed a project that built an F1 car from scratch for a competition. When the cars lap around, he sees not how they are doing, but what they are doing. It’s a bit like watching the World Cup to see if the Jabulani ball changes in some way during play. The ball didn’t change, but in F1 the cars do.

“People don’t notice it, but in every single race, teams come up with minute developments. It makes a huge difference to the car’s performance,” says Rishabh.

Once a team makes the change, having conducted extensive research and development, the other teams have just a couple of weeks to replicate it. “They don’t have the data, they just see what’s there, and then try to make, test and incorporate it into their cars.”

Last year, the Brawn GP racing team was able to find a loophole in the rules and introduced a new type of diffuser, an aerodynamic component attached to the rear of the car. The other teams protested, but the diffuser was allowed. Soon enough, all teams had it. Then there was the shark tail, a safety structure behind the driver’s compartment—to protect his head if the car overturned. One of the teams introduced a ‘fin’, a modified shark tail which gave better aerodynamic drag while cornering. Every team had it within a few races. The pace at which technology is transferred is, in Rishabh’s word, “amazing”. But, paradoxically, it can take years for it to reach the road car.

Says Karun Chandhok, the only Indian driver in F1 currently, on what he sees as having jumped over from F1 into a road car: “The one feature… is the paddle shift gearbox. The 1989 Ferrari F1 was the first car in the world to have a semi-automatic gearbox, and from there more controls have been added to the steering wheel. This was revolutionary in Formula 1 and has crossed over to road cars.”

Then there is active suspension, in which the suspension is controlled electronically. Developed in the 1980s for Formula 1, it was banned as it gave too much assistance to drivers.  “It is now there in commercial vehicles, at least high-end models of all major car manufacturers,” says Rishabh.

According to Rush Parekh, one of the moderators of Team BHP, a 60,000-strong online discussion forum of automobile enthusiasts,  technologies tested or fine-tuned in Formula 1 and now present in regular cars would include VTec, a system to improve engine power. It was introduced by Honda and is now available in practically all sedans in the Rs 10 lakh bracket. Another is the use of carbon fibre. However, it is seen only in super-premium cars because it is super-expensive. “Audi first used direct-injection tech in racing (not F1), and this has made its way to road cars,” says Parekh. “Direct-injection, in which fuel and air are mixed inside the engine cylinder instead of outside, has singularly made cars more powerful and efficient. Engine oil and tyre companies do learn a lot on the track, then transfer this knowledge.”

One of the reasons technologies take time to get transferred into road cars is the expense involved, which in turn is a result of the fundamental differences between racing and road cars. Formula 1, essentially, is a set of rules defined to build a car. The car would have very low ground clearance, sometimes as little as one inch, because the racing circuit would be flat with no uncertainties like Mumbai’s potholes. Victory is decided not on top speeds achieved but how fast you get around corners. Which means braking as late as possible and accelerating as soon as possible. “The better your car can brake, the later you will apply your brakes, so for longer periods you can have high speeds, and go into the corner,” elaborates Rishabh.

The closest you will come to driving a road car with unadulterated F1 technology is by getting behind the wheel of a supercar, a kind which has just become available in India. You would probably have seen the Michael Schumacher advertisement in which he runs a car upside down in a tunnel. That’s the Mercedes SLS, launched in India last week  at a price of Rs 2-2.5 crore.

All the major F1 teams collaborate with their road car divisions to create supercars. Sportswriter and F1 addict Chetan Narula, who’s not missed a race in 10 years, says, “If you take an F1 car and make it into a two-seater road car, you get a supercar. It has the traction, the brakes, the aerodynamics of an F1 car. In cars like the McLaren MP4, even the rear-view mirrors is so aerodynamically designed that it is not going to have any drag problem while going at high speeds.”

The next major F1 technology that is expected to be a standard feature on roads in the future, is not even in play right now. The Kinetic Energy Recovery System (KERS) was introduced last season. It stores the energy lost during braking to produce a power boost. Says Rishabh, “This wasn’t popular last year, because it needs a generator and battery, which makes the car very heavy. Next year, they will use it again because technology has reduced the weight of the generator.” When KERS eventually makes its way into road cars, the energy stored will not necessarily be used for power boosts but for driving smoothly.

There are aspects which F1 cars borrow from road cars, like in the small matter of being environment friendly. Last year, Bridgestone introduced a green tyre. The carbon emissions during manufacture were reduced. The tyre could also be recycled. Also, Narula says, “Last year, teams could make pit stops to refuel. This year they have to carry the fuel for the whole race. So the teams have been concentrating on mileage.”

More fuel increases the weight of the car, affecting speed. Says Chandhok, “Improving fuel efficiency without losing engine performance is one of the most important tasks for engineers this year. If we can have an engine that consumes 10 kg of fuel less over a race distance, that will be a gain of three-tenths of a second per lap.” This is the area where road cars are ahead of the F1 curve. Says Rush Parekh, “Hybrid tech is already more advanced than the powerplants we see on today’s F1 cars. And there is serious development going on in the automotive industry, with relevance to alternative fuel technologies.”