Confessions of an Amateur Cook

Experiments in the kitchen while reading Michael Pollan’s Cooked 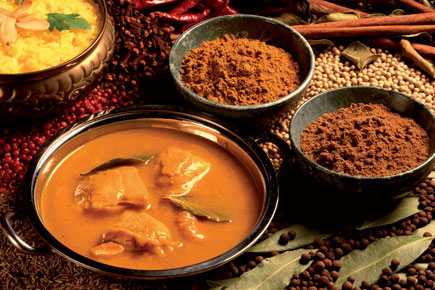 Experiments in the kitchen while reading Michael Pollan’s Cooked


The first time I made chicken curry it came out burnt and nasty. Before that the only other dish I knew to cook—something I perfected in my early teens—was to dunk cubed potatoes into a cup of boiling oil in a kadhai, throw in salt and every powdered spice within reach, and wait till it became oil-soft, fiery and golden. I still make it. Accompanied by curd rice, it is delicious homemade junk food and has ‘heart attack’ written all over it.

Cooking held little interest for me; the chicken curry happened late in life, around my mid-20s. It was the unmitigated disaster that made me persevere. It took a year or so until I got something I was satisfied with. During that period, at different times, I pounded whole spices for the masala, added first and second pressed coconut milk, a variety of marinades and many other things picked up from recipes. What I arrived at finally was simple—in oil, sweat onions, fry ginger garlic paste, add chilli powder, turmeric power, a specific chicken masala powder of a company called Eastern, add the cut chicken, add tomatoes and then let it simmer on a low flame for 25 minutes. Don’t add a drop of water. After about 10 minutes, the gravy starts bubbling; water leeched from the chicken and tomatoes gives the curry something rich and spectacular. I also learnt a few tricks along the way, which I don’t use in the chicken curry but have applied in other dishes like fish masala. I am not beholden to subtle flavours. I like controlled explosions. So, for example, I deliberately go overboard with spices and chillies and then calm it down with cream, taming it.

For some time now, I have been thinking about onion. Why is it that almost every Indian curry begins by shallow frying it? What would happen if you eliminated it altogether from Indian curries? Jains do it and they look pretty well fed as a community.

I recently read Michael Pollan’s book Cooked, a culinary and philosophical insight into the merits of cooking. He divides the book into four parts: Fire, Water, Air and Earth. ‘Fire’ is the direct application of fire to meat. This was how mankind began its tryst with cooking. ‘Air’ is baking and he mostly talks of bread. ‘Earth’ is fermentation or the use of micro-organisms like bacteria and fungus to make cheese or yoghurt or sauerkraut or—what would be of particular fascination to many—beer.

I found the section ‘Water’ most relevant because it refers to curries (or sauce as the Western world would call it). The question that I am nibbling over regarding onions is something Pollan has considered. He describes the phenomenon of starting with the vegetable as common all over the world: ‘…if you start with a dice of onions, carrots and celery sautéed in butter (or sometimes olive oil), you’ve made a mirepoix, which marks the dish as French. But if you begin by sautéing a mince of diced onions, carrots and celery in olive oil… you have made soffrito, the signature of an Italian dish. However, a “sofrito”—when spelled with one “f” and one “t”—is a dish of onions, garlic and tomato in place of celery, and identifies the dish as Spanish,’ he writes. Asian, Cajun, Far East, all have versions of this combination of onions plus aromatic plants.

After a couple of pages he again wonders, ‘Why is it that onions are so widespread in pot dishes? After salt I can’t think of another cooking ingredient quite as universal as the onion…What do they do for a dish?’ To find out he asks one of the chefs who is teaching him and gets the cryptic answer that it’s a chemical reaction. They then ask a kitchen-science writer who is ‘uncharacteristically vague on the subject’. Ultimately, to my disappointment, Pollan does not get an answer. He has a few hypotheses which include onions turning the food safe by acting against dangerous bacteria. But a theory is just that—a theory.

At some point, when I develop enough culinary gumption, I plan to do away with onion altogether and to see what happens. Between onions and its co-ubiquitous brethren, tomatoes, I am very clear on what is more substantial in a curry. In a salad, I hate tomato because its insipid insides seem to give it no character, but once turned to pulp along with meat or vegetables, it is dynamite at what it does. It adds both sourness and sweetness to a dish, but never overwhelms it. Often, I take a recipe and double the amount of tomatoes specified and the dish comes out laughing gaily.

IT WAS ONLY recently that I tried my hand at baking. By assiduously following a recipe, I managed to get a barely edible sponge cake and immediately realised that this was never going to be my thing. Baking requires a level of precision and care that few possess. It needs the concentration of a watch repairer. Make a mistake at any of the multiple stages of prep and the cake or bread ends up as something else.

Pollan takes the idea of baking to a metaphysical level. The infusion of air is at the heart of baking. He begins by trying to find out the secret of the best bread he has ever eaten, Tartine bread by a baker named Chad Robertson, describing it thus, ‘…a big country loaf shot through with holes the size of marbles and golf balls—easily more air than bread. It had a tough hide of a crust, very nearly burned, but held inside a crumb so tender, moist, and glossy it made you think of custard.’ He goes to Robertson to learn how it’s made. He is told not to use readymade yeast but instead to make his own culture. This Pollan proceeds to do and, after some failures, finally manages to get the bread right. He doesn’t stop there. Tartine bread uses white flour and Pollan has a problem with that because it has no nutrients or fibres. He goes to another baker-philosopher, Dave Miller, who ‘for the past seven years… has tripped his vocation down to its Thoreauvian essentials: one man, some sacks of wheat, a couple of machines, and an oven.’ Likewise, almost all of Pollan’s culinary explorations lead to an age before industry started doing what human beings did in the kitchen.

This is the crux of Pollan’s cooking. It is a bid to understand how modernity destroyed the ability of human beings to cook in homes and what we have lost by it. And also to appreciate the reverse—that by cooking according to home traditions, we can again capture some lost piece of ourselves. Cooked is a first class insight into what is happening biologically and chemically within ingredients as they transform into food. But it also shows what is happening within us psychologically and socially when we cook.

Pollan is a purist time-travelling into an ideal cooking universe. He devotes a large number of pages citing anthropological studies that suggest humanity evolved from apes because of cooking. Chewing and digesting takes a lot of time for animals. By cooking, food became ‘more energy-dense and easy-to-digest’ allowing our brains to expand and stomachs to shrink. ‘Cooking, in effect, took part of the work of chewing and digestion and performed it for us outside of the body… Freed from the necessity of spending our days gathering large quantities of raw food and then chewing it, humans could now devote their time, and their metabolic resources, to other purposes, like creating a culture,’ he writes.

I don’t believe it. It just sounds far-fetched and there are hundreds of other theories on why man made the jump from apes, including aliens coming and bestowing consciousness upon us. To really know the truth of it, someone will have to go back a million years. And then it might be nothing like any of us can imagine. There is plenty to be got out of cooking. There is something mystical about transforming what is raw into the engine of life. But that’s only if you are thinking about it while reading or writing a book on cooking. The rest of the time, something good to eat, and, after that, fed to others to show off, is all I ask of what I cook.