Temperatures were still in their 30s in Bombay when I got a call from Himachal—there was the smell of snow in the air. So he packed his bags and loaded them into his car for a 2,000 km ride 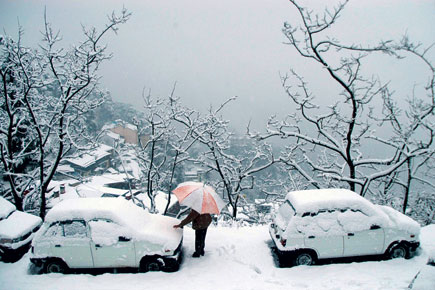 Temperatures were still in their 30s in Bombay when I packed my bags for a 2,000 km ride to find the snow


Harihans Rampyare had cast a line in the Pabbar and was waiting for the trout to bite. On a waft of wind came the chimes of temple bells from the nearby Hateshwari Temple in Hatkoti, as I stood a short distance away, trying to find rustic landscape shots through my camera’s viewfinder. Suddenly, Harihans’ line jumped wildly, and he reeled in a large blue-brown catch.

His next move made me realise why the Himalayas and its people endear me so much. I had applauded his catch and he called me over. Within minutes, we had a fire going, and a little butter and salt was rubbed on the trout, after which it was grilled to perfection for an afternoon snack. While we were munching on the succulent flesh, he told me that he smelt snow in the air, and I sent up a silent prayer hoping that his olfactory observations were accurate.

Three days earlier, in Bombay, at 9 pm, my phone had buzzed with Thakur Prakash’s call from Thanedar. An old and dear friend, he knows how much I love the Himalayas in winter, especially when it snows. A man of the hills himself, he had smelt snow in the air and said that I should come visit his little Orchard Retreat on the Hindustan-Tibet road, two hours east of Shimla.

At once, I called my friend Chetan, and we had our bags packed in 90 minutes and loaded into the car. We set off at 5 am the next day, the last day of the year. Bombay was still at summer temperatures. With daytime highs hitting 30º Celsius, the prospect of catching some snow instead had been too tempting to resist.
We raced the mercury down. As we sped along the highway, the car’s dashboard indicator saw the external temperature drop from 28º in Bombay to 15º through Rajasthan, and was now hovering at 9º at the Pabbar Valley in Himachal Pradesh.

We’d managed to make Bombay to Ajmer (1,100 km) in one day, and that says a lot for India’s fabulous Golden Quadrilateral highway project that links Kolkata, Chennai, Bangalore, Bombay and Delhi. Two years ago, this would have been impossible. We’d outrun the fog that shrouds Delhi and neighbouring Haryana at Karnal, and then turned off National Highway 1 at Pipli to take a back road to Himachal Pradesh past Paonta Sahib and Chakrata, the latter a little-known hill station in Uttarakhand. Locals will conspiratorially whisper to you that it was here that Prabhakaran was trained.

“When will it snow? When will it snow?” I rushed into the reception of Chakrata’s Snow View Hotel and asked the manager there. He was so startled that he dropped a spoonful of bright red tomato soup on his fine woollen jacket and looked at me with trepidation in his eyes.

“Sorry sir, snow will only fall in the last week of January,” he replied in a quavering voice, perhaps a little afraid that he and not global warming would be blamed for shifting weather patterns. He also added by way of consolation that we could take in other sights around Chakrata, which essentially meant visiting Tiger Falls 20 km away.

To his credit, the experience was absolutely fantastic. It did involve a 30 minute trek down the mountainside to a valley where it was hidden. And I really mean hidden—the roar of the falling water grew louder and louder, as if to explain its name, but it stubbornly remained out of sight. Even when we got to a stream flowing from a pool created by the cascade, Tiger Falls stayed hidden behind a gouge in the hillside. We had to throw off all footwear and wade barefoot through ice-cold water that stung like pins and needles, dodging sharp rocks, to finally catch sight of it in all its cascading glory.

One view of the thousands of cubits of water tumbling off a cliff edge, a 382 ft drop, and it suddenly seemed worth every bit of hardship getting there. In fact, even the wheezy, huffy-puffy trek back up the steep mountainside was worth it. Maiyaram, a local who runs a flour mill powered by the force of the falls, told us that the pool into which the water gushed was ideal for swimming in summer, and the meadows by its side, ideal for camping.

Wonderful waterfalls and invigorating treks were all very nice, but we’d driven from the sea in Bombay to the sky in the Himalayas to experience ice and snow. Alas, the winter that we’d been chasing for 2,000 km kept eluding us. So when the generous pahadi fisherman hinted at the possibility of snow, hope sprang anew. We thanked him for the impromptu roadside barbecue, and pointed the nose of the car towards Khara Pathar on the Hatkoti-Theog road.
The temperature was now down to 5º C, but the land around was dry and the sky heavy with clouds. The pine trees wore a coat of brown, and the higher reaches of the hillsides lay shorn of grass (at least partly by livestock).

But it all changed the next morning. The clouds had finally been overwhelmed, resulting in rain that turned into snow as it grew colder. I threw open my curtains at the Giri Ganga Resort in Khara Pathar to a whitewashed winter wonderland. We had finally found winter. My whoop of joy at seeing snowflakes descend must have woken up all of Pabbar Valley. It certainly woke up Virender Khotal, the resort manager, who jumped out of his bed like a springbok that had sighted a lion behind the bushes. He was at the reception with bubbles of sleep still popping around his face when I raced there with all the enthusiasm and glee of a glutton at a free buffet. Khotal was grateful for the existence of a reception desk between us, because he could see in my manner and abandon that I would have grabbed and dragged him out in the open to have a snowball fight with me, so wildly happy was I at the sight of snow. Deftly staying beyond clutching distance, he told me that driving off anywhere was not a good idea, that the roads would be ice-layered, and that I should wait for a few buses and cars to clear away the icy surface for the car’s tyres to get some grip. “Right now, the tyres will feel like ball bearings on glass,” he warned.

Of course, we weren’t in any hurry to leave. We just wandered about. Outside the resort, everyday life went on as usual, with people trudging to work, some smiling in amusement at our joyous clicking of photos of the ice-covered car, snow-laden pine trees and white hillsides.

Eventually, we drove, and driving in snow was an exciting experience in itself. Any jerky or sudden acceleration or braking would result in the car going into a slide.
The landscape all around, dusty and brown just the day earlier, had done a Cinderella as it turned prettier than I had ever seen the Himalayas. The sheath of white added a dazzle to everything in sight. We found villagers huddled by little roadside fires here and there, and children playfully pelted our car with snowballs. With snow all around, an icy red car made a good target.

We continued driving over roads framed by snow on either side to Theog, and then turned right towards Thanedar, where my friend Prakash Thakur standing in half an inch of the white stuff received us with twinkles in his eyes that seemed to say, ‘I told you so’.

While it continued to snow that night, we woke up to bright blue skies the next day and promptly headed out to the Tani Jubbar Lake, which is 8 km from Thanedar. Once again, though I have been here before, I have never seen it prettier. The lake reflected the bright blue sky and snow all around. The air was invigorating because it was clean and crispy cold. The Nag Devta temple looked a picture of piety with snow clinging to its slate roof and icicles beginning to form at the edges. Standing in the snow-covered lawn of the little hotel there, staring out at the icy peaks, and drawing solace from a steaming cup of chai, I felt supremely content.

I had found the winter that I had been chasing for four days over 2,100 km.