Racing jockeys have to be small light men so that their horses can run faster. As a result they follow terrifying diet regimens. Guess what they do once they retire 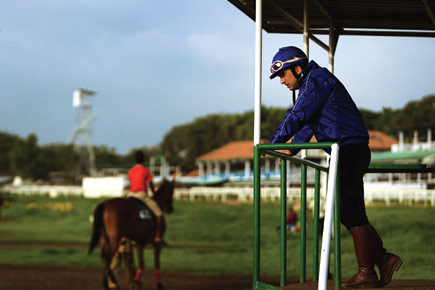 Racing jockeys follow terrifying diet regimens. Guess what they do once they retire


Some mothers have opinions about horse racing. When a boy becomes a horse-racing jockey, it robs his mother’s life of its ultimate purpose: feeding her son gaajar halwa made with her own hands. She sheds copious tears as relatives help arrange the funeral of the family recipe book. That day on, she wears only white.

Every profession demands a price from those who embrace it. Television anchors cannot afford to be sensible. Bollywood actors have to be committed to method plagiarism. Management types must develop a command over jargon. Jockeys cannot gain weight. They cannot eat. They have to be light so that the horse is not overburdened and is able to run fast.

You feel like Gulliver when surrounded by jockeys. They are a diminutive breed. The average jockey weighs about 50 kg and is about 5 ft tall. Though strong, he looks gaunt. There is an aridity about him as his body contains a dangerously low amount of food and water. In the era of Seabiscuit, the legendary horse who captured the imagination of America in the 1930s, jockeys went to extremes to keep their weight low. In her award-winning book, Seabiscuit: An American legend, Laura Hillenbrand wrote, ‘Most jockeys ingested every manner of laxative to purge their systems of food and water. Diarrhoea became the constant companion of many riders, some of whom became virtuosos of defecation.’

Few subject themselves to such horrors anymore. But there is no avoiding the long, calorie-burning walks, the deliberate perspiring in hot sweat-boxes and the frugal diet. “Riding gives us our bread and butter but we can’t eat it,” says Aslam Kader, the former jockey.

Jockeys have about one full meal in a week. Pesi Shroff, the retired jockey who is now a trainer and, at last, allowed to have the second helping, says, “Monday was a bit of an easy day, when I could allow myself a leg of tandoori or roast chicken, with a good serving of salad or steamed vegetables, because racing was still a few days away. From Tuesday onwards, however, it would be black tea, fruits, soya rings, light yogurt with Splenda powder. On race days, I used to have nothing except Electral powder and maybe a cup of black tea.”

This lifestyle has many side-effects. Pesi remembers not sleeping well. “Falling asleep on an empty stomach was terrible,” he says. “It was the worst part of the diet. I would get cramps due to excessive sweating and acidity.” At the Aslam Kader home, the wife thought the husband was a little weird. A husband who ate so little had to be. “My wife is the healthy type,” Kader says, using the Indian euphemism for the word ‘plump’. “She eats everything.” C Rajendra, still young at 34 and many rides from retirement, sometimes dreams of food. “You go out with the horse owners or to a party and everyone is eating but you,” he says sitting in the Gallops restaurant at Mumbai’s Mahalaxmi Race Course. “Then you go to sleep and you see food. It happens.”

Riders enrol into jockey school in their early or mid-teens. It is here that they start turning into food celibates. Occasionally, in jockey school, their resistance cracks. Says Malesh Narredu who is 41 and in the last lap of his career, “On Sundays, the food in the canteen at jockey school would be good. On Mondays, we would be weighed. So I would request the chef to make the special food on Monday instead, after the weigh-in.” Ultimately, however, they achieve nirvana, becoming free from all food related temptation.
Then they retire. They are suddenly free to eat what they want, and in vast quantities. But they don’t. Used to tiny amounts of food, their digestive system finds it impossible to suddenly handle big meals.

As with all aspects of Indian horse-racing, Pesi Shroff is again the poster boy here. Post-retirement, he ate with relish. He was 49 kg in 1981 when, as a 16-year-old, he made his jockeying debut. When he retired in 2004, he was 54 kg. Now he is 72 kg. His waist size, which was 30 inches, has swelled to 34 inches. “Vijay Mallya says even my hands look fat now, and starts laughing uncontrollably,” Shroff says. (What about your own hands, Dr Mallya?)

Shroff says that at the end of his career he found it difficult to maintain his weight. “Once I got to 54 kg, it was a tough battle. Almost everyday was a challenge,” he says. Racing analyst Prakash Gosavi says, “On Sunday evenings, after his race, I would see Pesi at Gallops, wolfing down a big cheese sandwich. I would ask him about it. He’d say, ‘If you don’t like what you see, don’t look.’” The very first night after he retired, Shroff went to the La Dolce Vita Italian restaurant in Pune with family and friends. “After that I got incredibly sick,” he says. He did not over-eat. But having been a jockey for 24 years, even a regular meal was like a binge to him.

Jockeys who are active do not have complete dietary freedom. But they have that one day in a week, that glorious Sunday evening or the Monday morning, depending upon their individual habits, when they can indulge. Rajendra, the champion jockey who sometimes sees food in his dreams, does not waste time. Sunday evening is when races end (after having started on Thursdays) and that is when he starts feeding himself . “I love to have chicken tikka wrapped in a roti after a race. I send for it right away,” he says. “Or even vada-pav. I tell the attendants to get whatever’s available. For the Monday lunch I like having a dosa or a biryani. I either tell the cook or make it myself.” Malesh Narredu stays away from rice the rest of the week but has it on Monday. “I leave the menu to my wife, but rice and dal is a must.” You ask him how much of it he can polish off at a single sitting and you expect a dramatic answer, like a whole pot of rice. But Narredu says, “I take a second helping.”