On the streets, boys survive on a powerful code of absolute friendship. They become one, a swarm, a super organism that sometimes gapes through your car window 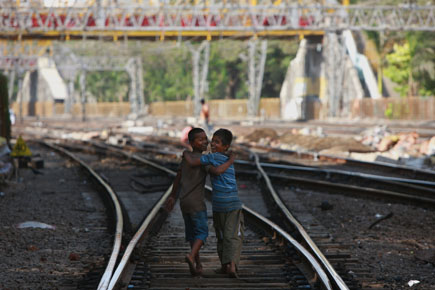 On the streets of our cities, boys survive on a powerful code of absolute friendship


After Malli’s mother died when he was five years old, he lived with a pack of dogs. This was in the vicinity of Churchgate station, a terminal of Mumbai’s local rail network. He ate the scraps which the dogs ate, he slept with them on the footpath, he played with them and when the animals went roaming, Malli followed. As time went by, he got familiar with a group of boys living on the station’s platform and moved into the station. For the first time, he found the support of other human beings. Except that they were also children like him.

In nine-year-old Malli’s world now, there is Ajay who is 14 years old and who has been in the station for four years, and Pappu, who is about 10 and has recently joined the gang. Also, there are two dogs. Between the five, they share food, money, clothes and even toothbrushes. Ajay and Pappu are ragpickers and well-off, while Malli, a professional beggar, just about makes do. So, Malli is subsidised.

When they go for a movie, Malli’s tickets are bought by the others. When he runs out of money, they give him a small loan. The three boys work and spend the day independently, but sleep together at night, vigilant against robberies and sexual attacks.

A few years ago, Pappu’s forehead was ripped when a man banged him against a wall. Ajay, too, has a variety of scars and stitches. He says, “We don’t fight. And we don’t want to fight. But if someone hits one of us, all three will hit back.”

India has the largest population of street children in the world. A report by Childline India Foundation, a non-governmental organisation (NGO) working with children, says: ‘At least 18 million children live or work on the streets of urban India, working as porters at bus or railway terminals; mechanics in informal auto-repair shops; vendors of food, tea, or handmade articles; as street tailors; or ragpickers.’ But the number is just an estimate. “The last comprehensive assessment was done back in 1991,” says Sonykutty George, specialist, child protection, Unicef.

Most street children are either runaways or have been abandoned or orphaned. For survival, they gravitate towards each other. The station is a focal point in such groupings. Most of the boys (the girls are more actively pursued by NGOs if they are not already lost to the flesh trade) come from remote corners of the country, some even from Nepal and Bhutan. They hop from one train compartment to another, trading stations every few months.

When his mother died, Pappu’s father abandoned him on a train in Varanasi. From Varanasi, Pappu came to Delhi and lived on platforms there for a while. From there he went to Surat (a dangerous station where he remembers fights, demonstrations and a lathi charge). He then took a train to Mumbai. One day as he stood watching Ajay and Malli playing cards at Churchgate station, they asked him to join in.

Ajay, too, ran away from his home in Bihar four years ago. He is the leader now, but a year ago, it was Babloo. There was also Satish, a boy who was as compassionate as Babloo was violent. It was a much bigger group then, but after a police raid many were hauled off to a children’s home. Some were released, others escaped, most went to live in different stations. Babloo is at a platform in Dadar, and Satish is in Borivali. Both are drug addicts. “That’s why I don’t associate with them,” says Ajay. Things are different now under his leadership. None of the boys are addicts.

Malli is always in torn shorts and a tattered shirt and tries his best to look filthy. The first is professional: Malli is a beggar and he needs to look the part. The second is subconscious. According to social workers, a filthy appearance helps keep sexual abusers at bay.
Most street children deny ‘ganda kaam’ (sexual abuse) exists. “Why wouldn’t they?” says Johnny, a 23-yr-old youth who spent 14 years at CST station in Mumbai. “They fear being ridiculed.”

People who work with street kids believe almost all street children have experienced sexual abuse. All the boys in Johnny’s group were raped as children. Three of the boys eventually started doing it for money. “They would feed us when we didn’t have money,” says Johnny.

An abuser can be anyone, often the senior boy who takes you under his wing. An abuser is also “someone from a good background,” says Johnny.

Johnny’s group developed a method of dealing with such abusers. When they saw an abuser luring a child, they would wait for an opportune moment and then, “We would jump on the man, rob his belongings, strip him and disperse.”

Johnny has moved into a kholi (hut) now. He works as a peon. But there is violence still seething beneath. “These kids have rebelled within,” says Neha Trivedi, a counselor and friend to Johnny’s group. The rebellion can be directed outwards against other human beings, or it can be directed inwards through narcotics. Sometimes it can shine through in sarcasm and humour. At Mumbai Central station, 11-year-old Pankaj is telling his station-mates something which they have all heard before:

One day khadoos ghati /raised his laathi and told a haathi, /main pehelwaan hoon…/ And then the elephant lifts its trunk, strikes ghati (reference to an uncouth cop) to the ground.

End of story and not particularly funny at that. Yet, the children laugh because this policeman, he exists. They laugh because they see him fall. Sometimes the rebellion is directed skywards. Ajay, from the Churchgate station group, wears an Islamic crescent, a Christian Cross and an Om as lockets. “I want to confront Him,” he says. “But God will never come down. What’s more, he doesn’t speak to children. Haven’t you seen in paintings? He’s surrounded by grown-ups. We must grow up first.”