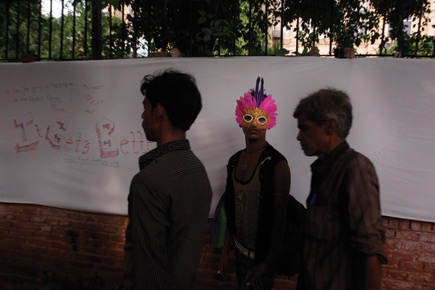 
“When I realised that I was gay, I was desperately lonely. I had nobody to talk to and the internet was all I had!” says Broom, one of the founders of Gaysi, an online magazine for India’s queer community. And while Broom, living in the UK, found a lot of content for the LGBT community outside India and for Indian gay men, there was nothing that spoke to her with any relevance. Ditto with MJ from Mumbai, who had to be content downloading and watching season after season of The L Word.

Broom and MJ found that among the desi lesbian community, there was need for a space where they could ‘come out’, even if it meant only to themselves, and even if they had not taken that step in real life. Together, the friends created Gaysi (being gay and desi; gaysifamily.com) in November 2008. In some ways, for Broom, it meant giving back to the online community the support she had found there. “When I started blogging about my coming out and acceptance of my own sexuality on my own blog, I got such an amazingly positive response from straight and gay readers. It helped me heal and come to terms with who I was.”

Gaysi was born as a platform for individuals (although it was initially meant for the lesbian community, everyone—even straight people—were welcome) to discuss their sexuality and other issues associated with it. Broom says, “I truly believe that we have helped so many people not just come to terms with their sexuality, but actually celebrate it.”

Chicklet is a regular there and now part of the core team. Talking about her own experience, she says that Gaysi helped her find her voice again, coming as it did at a time when she did not know how to “come out to her own self” and found she was shutting herself in more and more. “I found Gaysi when I had no other gay desis in my life,” she says.

Apart from the main section on opinions and personal stories, the Gaysi website also provides space for news, reviews and interviews. ‘Jab We Met’ is a space where couples get to share their love stories. ‘Writer’s Bloc’ is another major section, an effort to create a community within Gaysi where the often unheard and unsure voices of queer people speaking (and writing) in regional Indian languages can be brought out to a larger English speaking audience. As, the website says, ‘It holds out for us the possibility of hearing stories of courage of queer people around the country, stories that help us keep the faith, stories that help us create an empowering voice of our community. Gaysi is now sitting on a lot of material, but not enough people [are] willing to spend time and effort in the translation.’

Despite this focus on open communication and discussion about sexuality, Gaysi gives members the freedom to speak from behind their chosen names. As MJ puts it, the people there are still “between closets”; that is, out, but selectively “to those who matter”. The team avers that if any of them were to write anything else on the internet, say a cooking website or mommy blog, she would still blog anonymously. In the words of Broom, “That’s because I don’t like the idea of someone googling my name and finding out everything about my life. I make the choice of allowing people into my life and allowing them to know as much or as little as I want them to.” The aim at Gaysi is that nobody’s experience of coming to terms with his/her sexuality or coming out be trivialised. “Let’s not act like the only people in our community who are worth learning from are the ones who wear their rainbow on their sleeve.”

Beginning with two people, Gaysi now has over 700 unique page views a day, a strong Twitter presence, and, in these three years, has grown to being more than just the blog. The Gaysi community forum and ‘Writer’s Bloc’ project are becoming larger parts of it. And three months ago, they launched their first e-zine, which they hope will be a regular publication in future with four issues a year.

Future plans also include taking the Gaysi project to smaller towns where they feel women have even less freedom to talk about or even think about their sexuality. A mobile-based platform for Gaysi is also in the offing. One of the biggest challenges for the team has been to make the project financially self-sustaining; at present, the core team pays out of its pocket for expenses incurred in running the website. There are now Google ads on the website, which, as the team acknowledges, takes time to monetise, “given that we are not discussing Pamela Anderson and her double Ds,” says MJ with a sigh.

Offline, Gaysi involves itself seriously with queer pride across the country, for instance, in the form of fund-raising for the 2011 Queer Azadi Mumbai. Gaysi has also found a lot of support from prominent spokespeople for the LGBT community, like writer Parmesh Shahane and director Onir. Shahane, head of Godrej-India Culture Lab and the author of the book Gay Bombay, commends Gaysi on two counts: “The stories, features and reviews are all of what it means to be a gay Indian, and this is a unique experience. Secondly, Gaysi also serves as a place for non-

gay people to understand the gay community better… how silly their stereotypes are.” According to him, it also serves as a place to document the discourse and changes in Indian society in the broader context of the larger LGBT movement in areas such as legal issues, health, arts and the media.

For the people behind Gaysi, it has been a rewarding experience, to the extent that they feel it has aided their own personal growth as well. As MJ says, “Personally, Gaysi has helped me be more open about my own sexuality. From being completely hidden and in the closet, today I am able to discuss my sexuality openly with like-minded people.”

Soon after Gaysi was created, in mid 2009, the Delhi High Court legalised homosexuality. The judgment spoke of the notion of ‘inclusiveness’ inherent in the Indian Constitution. In practice, this inclusiveness, even acceptance, is a long way off. And that is one of the things Gaysi aims to bring about for the LGBT community.