How chairs, cars and computers are killing our backs. Open decodes the achy algebra of L5 to S5, the most troubled vertebrae in our lower spine. 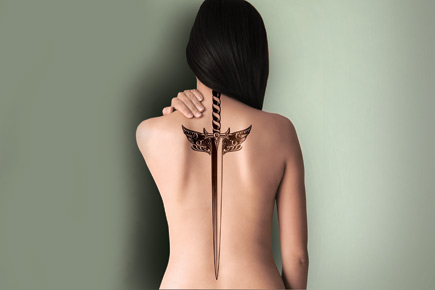 Open decodes the achy algebra of L5 to S5, the most troubled vertebrae in our lower spine.


Hormad Sorabjee can tell you everything about automobiles, from torque to tachometers. Last August, this host of popular TV auto shows also gained unorthodox auto-expertise: about the impact of the suspension on the spine. “My job profile is not back-friendly,” admits Sorabjee, who wasn’t able to sit or walk due to acute back pain, aggravated by years of driving and lugging heavy bags around. This makes him privy to facts which not all doctors have. “There’s no suspension capable of tackling our potholes. Nowhere in the world are the roads as bad as ours, even Slovenia has better roads,” complains this editor of Autocar India.

These conditions are utter punishment for natural shock absorbers: that is, our spinal discs. Currently, 75 per cent of the cars we sell are hatchbacks. Their small wheels and limited suspension cannot cushion us from road ruts. Only petrol-guzzling and impractical SUVs are capable of balleting over craters. “The move to low-profile tyres worsens spinal-lashing,” says Sorabjee. That’s why he pulls his car-seat right up front, chooses a back brace (from a large collection) and sits high to avoid craning his neck. Taxi drivers suffer similarly. But who recognises the cabbie’s off-kilter posture as spine-trouble brought on by bad suspension, poor springs and road potholes?

Back trouble dates back to when our ancestors decided to ditch a quadripedal life and become a unique living species: the upright ape. Millions of years ago, this single act doubled the pressure on our backbones. Modern life piled on spinal complications rapidly. “Almost 90 per cent of back ailments are lifestyle-related, which are mostly located in the lower back,” asserts Dr PK Dave, chairman, Rockland Hospital, former president of the Association of Spine Surgeons of India, and former director of Aiims, Delhi.

Beyond natural degeneration, injuries and the rising incidence of spinal tuberculosis, doctors are most concerned about the way we work, sit, play, eat and how that impacts our lumbar and sacral spine, which plays a bodily ‘supportive’ role. From Shah Rukh Khan who’s danced on moving train-tops, to all of us non-acrobat-dancing citizens, back trouble is widespread, and Voveran now is part of pain-relief vocab. Even among sedentary office-goers and active gymmers, “when 18-year-olds come in, I know it’s a gym-injury”, says Dr Dave. Women are the more affected gender due to hormonal complications and osteoporosis.

People are desperately seeking breakthroughs. That’s why today we’ve got an entire constellation of experts busy trying to solve the painful algebra of our aching backs, concentrating on L1 to S5 (lumbar 1 to sacral vertebra 5). They’re staring at the spine and seeing it in different ways. Yoga experts perceive the meru danda (spine) as our anatomical life-force, which is giving way under bad living. Reflexologists, treating the arch of the foot which they believe mirrors the spine, interpret pain and emotions within our backbone. Radiologists view tissue damage as cloudy greys, shadowy white on black film. GPs and acupuncturists tap and cup the back till they hear nerves speak (us screeching ouch). The spine surgeon is the only one who actually touches our bony white vertebra, when reaching into our body to replace a degenerated spinal disc.

“The artistry of the spine has reached its zenith in humans—it’s central to our existence, so it’s more than likely everyone will suffer back trouble at some point in life,” says Dr Harshavardhan Hegde, member of the Girdlestone Orthopaedic Society in Oxford and director of services at Fortis Hospital, NCR. This could be caused by mistakes as minor as ‘wallet neuropathy’ which is triggered by sitting on an overstuffed wallet pressing the sciatic nerve. Smoking also has a direct impact on the lungs and spine—nicotine causes disc degeneration and gradually kills spinal nerves.

And though we’re busy cloning genes, we still haven’t learnt the science of how to sit or stand. “You need to sit on the sitting bones of the buttocks leaving your tailbone free. Else, spinal nerves get crushed by muscles, canal space shrinks and eventually leads to a herniated disc,” explains Zubin Zarthoshtimanesh, an Iyengar-Yoga expert based in Mumbai.

Currently, aching and aware individuals in 70 organisations across the globe—comprising Oracle, McKinsey and Wipro—and some 400 patients a day are consulting Dr Sharan, a world-renowned expert in repetitive strain injuries (RSI) on how to survive insidious injuries brought on by computers, phones and office environments. Dr Deepak Sharan, who is about to conclude the largest-ever RSI study of 35,000 computer-worked professionals, says, “Over 75 per cent reported musculoskeletal work-related symptoms. And most injuries manifest within a year of starting work.”

The commonest affected areas include the neck and upper back (60 per cent), followed by lower back (40 per cent). The major causes are lack of appropriate breaks and poor office ergonomics. “The average Indian worker is five inches shorter than his overseas counterpart, but work stations don’t factor this in,” says Dr Sharan. Other common causes include intense repetitive work, static postures, mental stress and job dissatisfaction.

“Our on-site ergonomics programmes have resulted in healthier employees, increased productivity, increased competitiveness in the marketplace, less absenteeism and reduced employee group health insurance costs,” he says. This links to the hidden economic burden. “Not everyone mentions that backaches are why they want a day off,” says an HR manager at IBM. In America, after colds, backaches are cause No 1 for absenteeism. Yet, rest, which is most often advised, may actually be the worst thing. “Rest only for 48 hours,” says Vesna Jacob, fitness expert, “beyond that you will be weakening the muscles.” We do need to stretch and strengthen the spine, under expert supervision.

“Ninety per cent of people have a back injury, 110 per cent have an opinion, and the worst is when you realise you’re one of them,” rues Rasika Batra. This consulting qualitative researcher was pulling on a rowing machine when her lower back ‘snapped’. It took 13 months to heal. When she returned to work, everyone, even 20-somethings, complained about office furniture being at the wrong height. “No one gives you laptop coolers, I used a box file to raise my screen,” says Rasika, who’s been housebound for the past few months, after a cervical spasm prevented her from lifting a dinner plate.

We’re also making active mistakes. “We have 600 major muscles in the body, and people only want Salman Khan biceps,” explains Zarthoshtimanesh. He can’t understand why we obsess with these, rather than the para-spinal muscles which have a direct bearing on our hormonal, endocrine, circulatory and nervous systems.

In our evidence-based medicine age, patients are pre-empting diagnosis. “The number of self-referrals for back X-rays and MRIs has shot up,” says pioneering radiologist Dr Mahajan. Among all Mahajan Imaging Centres across the Indian capital, as many as 35 per cent of all investigations are spinal.

Back trouble shrivels life. “I’m a damaged piece,” confesses Bharat Atwal, a brand-consultant. He can’t bend. Can’t cook. Can’t take flights. A few months ago, while closing his car door, he felt like “someone was yanking out my tailbone”. His spine froze, he sank to the pavement as pain coursed up his body, bursting though his head. After 45 excruciating minutes, he crawled into his car and drove to a doctor. Today, after spending heavily on medical investigations, consultations, physiotherapy, pills and Rs 40,000 on a therapeutic chair to remedy cervical spondylosis, Bharat swears through gritted teeth: “I’m hell-bent on improving.”

Dr Hegde, who’s done the most disc replacements in India, reels off pain patterns in perfect prose. Severe and deep pain means it’s a disc, if it manifests in the leg it’s an irritated nerve, spreading through the back then it’s probably facet joint trouble, if there’s an associated muscle ache then it’s a ligament spasm. “Only an unfortunate 5 per cent need invasive surgery,” says this veteran orthopaedist.

People are enlisting at yoga-camps, physiotherapists and therapy centres for any relief. But what’s the best approach? “World over, acupuncture is being considered as the first treatment line for spondylosis and sciatica,” says Dr Raman Kapur, chairperson, department of acupuncture, Sir Gangaram Hospital in Delhi, and adjunct professor at Ignou. This expert acupuncturist has started doing Pilates to strengthen his spine. “My practice requires bending over supine patients, I was manifesting early signs of scoliosis (curvature),” he says.

Each day in his mauve-white clinic, as piped music plays, patients with achy-breaky backs have micro-fine needles inserted in the back and leg (upper lip in acute pain cases). A mild electrical current is delivered through these needles. “I try to release nerve and blood supply, also endorphins and enkephalins which are the body’s natural painkillers,” says Dr Kapur. It takes about 14 sessions of one hour each before people are healed by this Oriental technique.

Dr Manish Bhagat, a physiotherapist who consults at Delhi’s Max Hospital, says he gets constantly accosted on mentioning his profession. “Strangers at a mall, acquaintances at parties, even a bride with a backache at her wedding ceremony asked me for help,” he says.

Tension and emotions also throw backs out of sync, making muscles contract and causing spasms that add vertebral pressure, eventually leading to degeneration. Senior reflexologist Nomita Unnikrishnan, who’s trained 200 people in this natural healing art, says: “We’re plugged into anxiety. When we feel a lack of support, the lumbar (supporting spine) gives way. This is inaccurately ascribed to lifestyle.” To her mind, “Our lexicon is peppered with our own wisdom.” Cliches pinpoint pain, such as ‘buckle under stress’. New-age positivity leads to anger suppression which turns our muscles into a vice. Sarita Kapur, a lawyer, says: “After a showdown, my muscles refused to move at the gym.”

As a person who’s always turned to traditional healing, Arti Dwarkadas, a Mumbai-based brand consultant, opted for Ayurveda when diagnosed with a prolapsed disc affecting her L4, L 5 vertebrae. After an Ayurvedic month in Kerala, her back went bust again. She underwent a microsurgery four years ago, which upgraded her back and beliefs. “Prolapsed discs can’t be cured by alternate medicine,” she declares.

The enormity of back problems is causing the mushrooming of diagnostic facilities, hoping to profit from pain. “What concerns me most is the use of second-hand equipment, which offer inferior images, less sequences and viewing slices,” says Dr Mahajan. Atwal experienced this first hand: “The doctors couldn’t read my MRI.” Aching consumers are also trying out electronic massage chairs. “All our chairs have a back programme and about 40-50 per cent of total sales are related to back relief,” says Arti Nagrath, general manager, Osim India, a leading health lifestyle retailer. With TV zappers, laptops to cellphones all within hand’s reach, activity level is dropping. Cushy lifestyles and sink-in sofas cajole us to stay put without ergonomic support. No surprise, back-gony is the price we’re paying for being slouch potatoes.