What it takes to design an SUV: tens of thousands of sketches, 1,800 conversations noted on yellow Post-its, feedback from eight-year-olds, plus a trip to Kenya 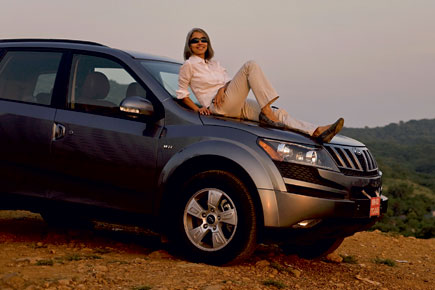 What it takes to design an SUV: tens of thousands of sketches, 1,800 conversations noted on yellow Post-its, feedback from eight-year-olds, plus a trip to Kenya


The Mahindra XUV 500’S door handle, when first designed, was slightly convex, trapezoidal, and of one whole piece the size of a large palm. It rested horizontally on the door frame and was fixed at its right end. You pulled from the left end to open and enter. When Ramkripa Ananthan’s boss saw it, he had a question. “Suppose,” he said, “I have shopping bags in my left hand, how can I open the door with my right hand?” He was right. Someone with shopping bags would have to twist, extend his right hand and then bend it backwards to open the door. The said person could, of course, just shift the bags to the right hand, but that was beside the point. “We said, ‘We will think of something’,” says Ramkripa. And so, the design team came up with a solution—a hole in the middle, so that the right hand can easily work its way in and pull the handle.

Designing an SUV involves hundreds, if not thousands, of such fine details that the person who buys the vehicle has no clue about. Ramkripa heads the styling team of Mahindra & Mahindra (M&M). There are 20 designers in the team and 10 model makers. Sub-groups work on different projects at the same time.

The XUV500, launched recently, had to close bookings in just over a week because the demand was so overwhelming. If cars and other four-wheelers can be told apart by gender, then a sports utility vehicle (SUV) is definitely male. In comparison, the Mahindra Scorpio, the company’s earlier bestseller, was ‘butch’. The XUV500 is unlike the Scorpio or any other SUV seen before in India. It resembles a crouching cheetah from certain angles. The wheel arches jut out like the haunches of the cat. The front, despite its honeycomb grille, has an angry look. There are those who see an irony in a woman heading a team that designed a man’s vehicle. ‘Ruggedness of M&M’s SUV XUV500 has feminine dash’ went a headline in an Economic Times article about Ramkripa. She herself finds the gender bit inconsequential.

To style an SUV, you first talk to a lot of customers so that you know what people want, and that when you make it, they go ahead and buy it. There’s a fundamental problem with this method. “If I ask you today what you like, it’s okay, but would you be able to tell me what you like tomorrow? You wouldn’t, because, one, you wouldn’t be able to visualise the future, and second, you won’t be able to imagine what you would be like in that future. We sort of look at people as they are now. So, we have to arrive at who that person is or bunch of people are who will be able to influence all other buyers in that category. You cater to that person. Then everybody else will follow,” she says.

Unusual stuff happens during this process. Someone read an article saying that people doing the influencing or getting influenced are getting younger. So Ramkripa and her team decided to find out what the youngest of them—children—wanted. They got about seven or eight children in the age group of 8 to 12. M&M’s XUV—‘X’ for ‘extreme’, guess reviewers—was still in its conceptual stage, but they had pictures of it, and got the children talking. “They sort of broke up into sedan versus SUV. One group felt cars are cool only if they are like a Jaguar, while another bunch rooted for SUVs. We could see what influences them and what gets the sedan guys interested.”

M&M, writes an XUV500 reviewer Manson in the online car lovers’ community Team BHP, ‘is to utility vehicles what Maruti is to hatchbacks. The Indian company eats up over 2/3rds of the MUV & SUV segment; the Bolero closed September 2011 with 10,000 units sold, while the Scorpio is the best selling SUV in India (monthly sales tally of 4,100 in the current calendar year)’. But all these vehicles had been designed for the Indian market. The XUV500 is the first the company wants to take global. To cite an example of what that means, consider the height—M&M had no option but to make it less than 1,850 mm tall because of underground parking norms in Europe. “You get opinions from all sides [in the company],” she says, “Someone would say, ‘[Make it taller so] I’ll get better headroom for a Sardarji because of his turban.’ Someone would think, ‘Global SUV mein Sardarji kahan se aaya? (Why worry about a Sardarji for a global SUV)’.”

If you want to make a global product, you also need to know what global customers want. At the time, Ramkripa was attending a two-and-a-half month design programme in London. On weekends, she would go to SUV plants and talk to customers. Colleagues went to other countries. At the end of this exercise, they had 1,800 odd voices noted down on Post-its. They tried to see patterns in them: say, things related to comfort, or what customers meant by ‘luxury’. The same bunch of ‘verbatims’ would be grouped separately. Then, they came out with three or four themes;  this was to bring everyone working on the design onto the same page. “For styling, this helps a lot, because then we know what people have to associate it with. I know the trim has to be like this, the feel of the car has to be like that…” For the XUV500, the theme thrashed out was ‘Feel the Power’.

There are two main components to vehicle design—exteriors and interiors. If one is about communication, the other is about the buyer’s own self. “If you sketch, you probably see lines and silhouettes. We probably see how light is going to reflect on the body,” she says. To the buyer, the exterior is what he wants the world to see him as; the interiors are who he actually is, because that is where he’s going to live, and “you can’t live with something that’s not you”.

The exterior is also a large expanse, and the art of making large surfaces appealing presents its own challenges. The designers start by making sketches. At first, they play around with views and angles. “You are exploring emotion: what do you want the car to be? Exploring proportion: what’s the stance, what’s the balance, what would the overhangs mean, what would the height of the car mean?” she says. Next, the design is visualised in 3D by making digital models via a virtual reality set-up. This is followed by making a real-world model of the vehicle. It doesn’t have to be full scale, but Ramkripa insists on it. She quotes a line from a designer she knew, to illustrate the point—“Gadha ka bacha hamesha sundar dikhta hai.” (A donkey’s child always looks beautiful, or anything small is always cute). “Once the model is made, you sort of push the form—you move this in, you move that out.”

In 2009, they were at this stage of making prototypes and grappling with different interior options when something unexpected happened. Anand Mahindra, M&M’s managing director, looked at what had been done and told them the story didn’t hold together. His solution: since the theme is based on the cheetah, go to Africa and see the animal in its element. “We packed our bags, got our yellow fever shots, and left,” she says, “That’s where a lot of things started falling into place.” In Kenya, one of the things that struck her was contrast—the startling change between day and night, the change between huge luxurious lodges and the way nature had been preserved. At Masai Mara, in the daytime, Masai warriors would walk in the wild near a lion. At night, no one would step out after 6 o’clock. “We wanted to communicate that; how the car changes. To make the car so that it is loungy during the day, and a wild, untamed beast at night.”

They worked to get elements of contrast into the car. The paint supplier was asked for pigments that would be subdued in the dark and glitter in the light. “We tested it and got people to see it at 11 o’clock in the morning,” she says, “So we ask them, ‘Okay, what’s the quality that the car has, what does it communicate?’ and then we ask them to come back at four, and the car actually changes character. The shoulder, which was earlier reflecting light, has now become subdued. A car that was looking very dynamic will start looking static because the light is now falling on the waist below the shoulder. When it moves into the light, there will be a lot of glitter, whereas in the shade it will have a relaxed feel because the shoulder lights are not showing up anymore. It was very important to get that glitter… so that different aspects of the car are accentuated by the paint.”

For the interiors, they decided on different moods for day and night. So, at night, the car has dark contrasts, while in the prime of day, it is more sedate, calm and composed. “Really appealing to two different types of people. This was all something we arrived at after going to Africa. We don’t see red in interiors often, but it came off that trip; also, fabric patterns, African art and craft, and the way they do their weaving. The colours had inspiration from elements like lake soil.”

For someone who has used so much contrast, there’s one striking contrast to Ramkripa herself as a designer of cars—she doesn’t own one. And has never owned one. “I cycle to work or I walk,” she says. It’s a little difficult to do in Mumbai, but it helps that her home is near the M&M plant.