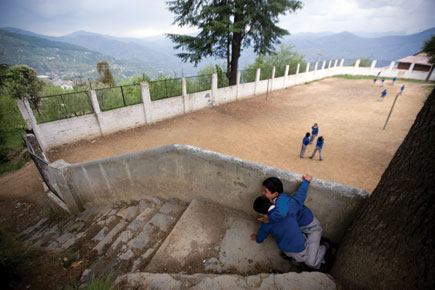 
The road to Thanedhar is flanked by apple orchards on both sides. In early May, one drives under a canopy of apple blossoms to enter the small town, two-and-a-half hours away from Shimla, at a height of 2,200 m. In May, the white and pink flowers that bloomed in April will shed their petals, and transform into pea-sized apples.

If Himachal Pradesh is the apple state of India, then the Kotgarh region that nestles Thanedhar is the apple capital. Approximately two-thirds of Himachal’s apples are grown here.  Thanedhar (literally, ‘cold ridge’) is also the quintessential Himachal hillstation. In the foreground are fruit orchards and the Himalayan pine forest. The River Satluj meanders through the lush valley below, and Rampur lies behind the mountain bend. Over the horizon are snow peaks. On a clear day, one can easily spot Shrikhand Mahadeva, the summer abode of Lord Shiva. Thanedhar fell on the old ‘Hindustan-Tibet’ mule road. Rudyard Kipling has called it ‘The Mistress of the Hills’ and based one of his short stories, Lispeth, here.  Besides typical hillstation landscape that includes a 139-year-old British church and a derelict haunted house, walking through Thanedhar also reveals quaint stories from the past, and the quainter characters that lived here.

All you need are walking shoes, an umbrella and curiosity. The umbrella doubles up as a reliable walking stick. Take a leisurely walk through the Stokes’ apple orchard to visit the place where the hills’ apple revolution began. The American Samuel Stokes, who arrived in India in 1904 to serve lepers, married a local, settled down in Thanedhar and passed away as Satyanand Stokes. Discover his eventful life and contributions to the country in your time here. Though a British officer had planted English apples in the state as early as 1870, the English apple didn’t take off due to its sour and tangy taste. Indians like their fruit sweet. So it’s only when Stokes planted five saplings of the Red Delicious Apple here in 1914, and actively promoted its production, did the horticulture revolution take off. You can also see the primary school Stokes started for locals, and the Arya Samaj temple he built. Towards the end of an eventful life that included work as a missionary, fighting against the British occupation and wearing khadi, Samuel Stokes embraced the Arya Samaj and became Satyanand Stokes. On the walk from Thanedhar to Kotgarh Church lies a cave that not many tourists visit. It is a cave where three luminaries from the pre-Independence era lived together for nearly two years. Sadhu Sundar Singh, also known as the ‘Apostle of Bleeding Feet’ was an Indian missionary, a Christian sadhu. He lived in the cave with Samuel Stokes and CF Andrews, an English priest who fought for Indian freedom and was a close associate of Mahatma Gandhi. All three had been ostracised by the local church for rejecting the Western ways of missionaries.

Meandering through the various fruit trees on walks builds an appetite for picking fruit. Throughout May, one can pick ripe cherries in orchards. At the end of the month, awaits a treat. Shakkar paara is a local variety of pale, sugar sweet apricots. One can only taste them here. Due to a poor shelf life, they are not exported. Although tourists can pick fruit through a system of pluck-and-pay, we Indians prefer to pick and eat, not pay. There are two kinds of beings Prakash Thakur—a fruit farmer and eco-resort owner—is scared to see on his orchards. “Black bears love golden apples, they eat fruit and break trees,” he says. And the other is the plundering variety of Indian tourists, who pluck recklessly. These are also people who complain about not having a television in their room, and no avenues for halla gulla at his resort. There are no big hotels in Thanedhar besides Thakur’s Banjara Orchard Resort, which is built on his apple orchard. This keeps the number of tourists visiting Thanedhar limited, despite its proximity to Shimla.

Thanedhar is exactly how an urban family starved of nature, fresh fruit, mountain air and leisurely time to walk to places would imagine their summer escape to be. Long walks to the nearby Hatu Peak (3,400 m) and Saroga forest offer a glimpse of life in the Himalayas. On Hatu Peak in May, you can see streams of melted snow, perhaps even small snow patches. Locals attribute their fortunes to Hatu Mata, a local deity with a temple on Hatu Peak. If you’re lucky, you might spot the elusive and gorgeous state bird monal on early mornings. If not, you will have to make do with flocks of sheep blocking the road, and an excitable sheep dog wagging his time away.

Seasons come alive in the mountains. In May, little evidence of the white, snow-covered winters exist, when the only patch of green are the coniferous trees. If all such trees look the same to you, and you don’t know the difference between pine and spruce, then a walk through the Saroga forest with a guide could enlighten you. It can also fulfil the simple desire of being inside a Himalayan pine forest with its fragrant barks and pinecones.

Days in Thanedhar are full of such simple desires and pleasures. Thakur remembers a request one of his guests from Mumbai had. She wanted to show her young son how a cow was milked. Thakur obliged, and couldn’t help but ask, “Has he not seen it before?” The lady confessed it wasn’t just her son’s first time, it was her’s too.