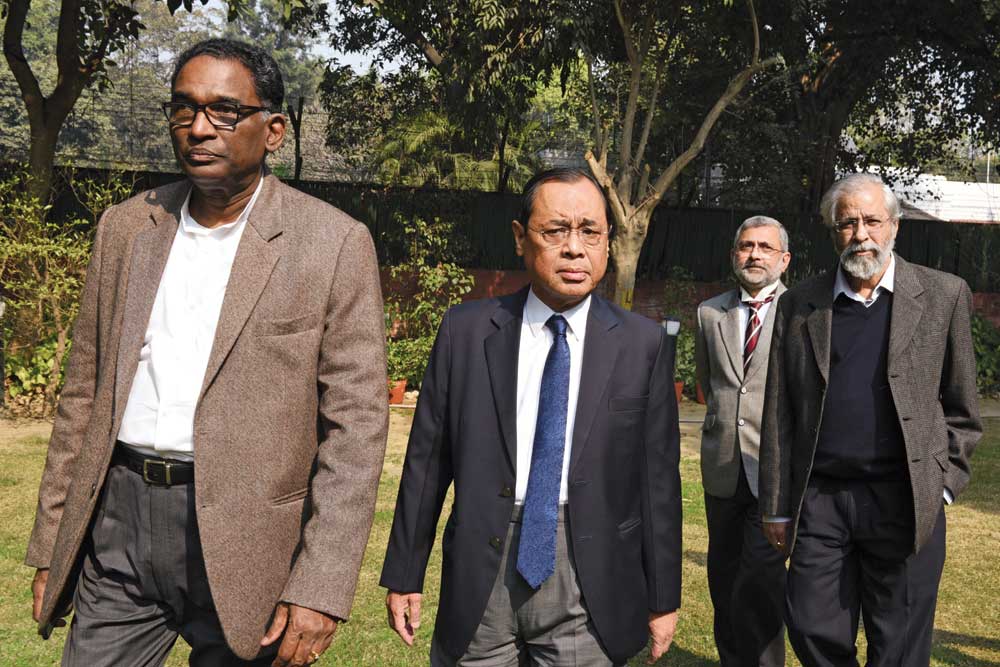 IN A DRAMATIC and unusual move on January 12th, four senior judges of the Supreme Court held a press conference in the capital. During the course of their address, they highlighted a number of administrative and judicial issues that showed all was not well with the apex court. A letter addressed by the four Justices— Jasti Chelameswar, Ranjan Gogoi, Madan Lokur and Kurian Joseph—to the Chief Justice of India (CJI) opened a virtual Pandora’s Box of controversies. More than anything else, it signified a trust deficit at the highest echelons of the Court.

For one, the letter virtually questioned the primacy of the CJI, asserting that he was merely a ‘first among equals’. For another—and this has been interpreted since then as the heart of the matter— the four were unhappy at the manner in which cases were parcelled to different judges of the apex court. Finally, the issue of ‘reopening’ the Memorandum of Procedure (MoP) for the appointment of judges to the higher judiciary was also highlighted in the letter.

Says a key part of the letter: ‘It is too well settled in the jurisprudence of this country that the Chief Justice is only the first amongst the equals—nothing more or nothing less. In the matter of the determination of the roster there are well settled and time honoured conventions guiding the Chief Justice, be it the conventions dealing with the strength of the Bench which is required to deal with a particular case or the composition thereof.’

The letter had also asserted that the CJI is the ‘master of the roster’—in plain words, the authority in the Court to decide which judge hears a particular case—only for the efficient transaction of judicial business and does confer on the CJI any superior authority over his colleagues.

It is for the first time in Independent India’s history that such an issue—a peculiar blend of the personal and institutional— has roiled the Supreme Court. While the letter was couched in careful language that avoided any mention of personal issues, it is well known that part of the problem is the alleged bypassing in certain cases of the four senior judges —who along with the CJI—form the collegium of the Court, its highest decision- making forum.

Trouble had been brewing since last November when a two-judge bench headed by Justice Chelameswar passed an order that a five-judge bench of the Court’s senior-most judges would hear a case that involved charges of corruption. The case pertained to allegations that bribes had been paid to ‘settle’ cases lying before the Supreme Court. Soon after that, a Constitution bench headed by CJI Misra overruled that decision and said the CJI was the master of the roster.‘No other judge can decide to hear a case by himself, nor can he instruct the CJI to set up a particular bench in the top court,’ ruled the Constitution bench, adding any deviation from this principle will cause ‘anarchy and chaos in the administrative dispensation of justice’.

What the four judges said on January 12th was at odds with what the CJI had asserted in November. The usual practice in the apex court is for senior judges to hear important and sensitive matters—including those that have political ramifications. But this is not an absolute principle. There are plenty of examples that show this. The Sohrabuddin Sheikh Encounter case in 2007 was heard by Justice Tarun Chatterjee, a junior member of the Court. Similarly, the Best Bakery case of 2004 was heard by Justice Arijit Pasayat, who was then a junior judge. Incidentally, both cases were adjudged in Court No 11. In the matter of validity of Aadhaar in 2012, the case was heard by Justice BS Chauhan, a relatively junior judge. The list of such cases is considerably longer: cases of far- reaching political import, for example, the Bofors Case, the Rajiv Gandhi Assassination Case, the disqualification of MPs/ MLAs on conviction, the Coal Scam case of 2012—were all heard by junior judges. Thus the argument that important cases are heard by senior judges as a matter of convention is weak.

It is also a matter of debate whether the administrative primacy of the CJI is akin to putting him on a pedestal above other judges. So far, there have been few, if any, instances when this proposition has been put to test. In the aftermath of the press conference, the Supreme Court Bar Association (SCBA) passed a resolution saying that cases involving public interest litigation should be heard by the CJI or by the Court’s collegium of five senior-most judges. The SCBA also said that differences over the roster and MoP should be considered by the full court and handled expeditiously. It is worth noting that out of the Court’s current strength of 25 judges, only four senior ones have raised these issues.

In the days after the press conference, conflicting reports of ‘tension’ among senior judges have appeared. When the court re-opened on January 15th, all courts carried out their functions as usual. In the meantime, reports state that three other judges of the court—Justices AK Sikri, AM Khanwilkar and DY Chandrachud—have tried hard to reduce the alleged tension. It is also noteworthy that on January 16th, the CJI formed a new Constitution bench that includes him, Justices Sikri, Khanwilkar, Chandrachud and Ashok Bhushan to help him hear important cases. The four dissenting judges are not part of the new Constitution bench.

As a fallout of the controversial press conference, there have been demands for ‘transparency’ in the internal functioning of the court. There also have been rather wild and exaggerated claims about how the CJI and the court function. These claims—dubious for the most part—have been made by a set of lawyers who hold a particular political disposition. The Indian Supreme Court, like most courts at the apex of judicial systems in Western democracies, prefers to carry on its administrative chores silently without any display of controversy. For example, when one compares the Indian case with those of the US and German Constitutional courts, the latter are far more opaque on their internal procedures. While transparency is now a catchword, it is also important to safeguard these internal processes from scrutiny by lawyers outside, if only to prevent any possibility of ‘gaming’ the judicial process.

The most noise about important cases being handed to junior judges has been made by lawyers who specialise in ‘political cases’. Even the dissenting judges have been careful in their letter not to allege any partisanship on part of the CJI

In this context, it is important to point out that the most noise about important cases being handed to junior judges has been made by a class of lawyers who specialise in ‘political cases’. Even the four dissenting judges have been careful to couch their letter in terms that did not betray any sense of partisanship on part of the CJI. The letter states: ‘We are not mentioning details only to avoid embarrassing the institution but note that such departures have already damaged the image of this institution of some extent.’ The lawyers, in contrast, displayed no such care in making their claims. One particular claim of certain cases being referred to Justice Arun Mishra—of Court No 10—in preference to other judges was insensitive to the extreme.

At the moment, the Supreme Court is hearing a clutch of highly sensitive cases whose decisions will have an impact on the country. At the top of the list is a case about the constitutionality of the Aadhaar unique identity system. Then there is the appeal on the Ayodhya case over a judgment of the Allahabad High Court. Lawyers of the All India Muslim Personal Law Board have argued the hearings in this case be postponed to “after July 2019”. This was one of the most brazenly politically inspired assertions made in the Court’s recent history. It does not require much to understand the link between that date and the General Election due next year. The CJI has not entertained this plea.

The Indian Judiciary is no stranger to controversy. It attracted more than enough of in the 1970s, a decade that was politically the most volatile since Independence. It was an age in which the judiciary clashed with the executive on various issues of constitutional propriety. One case, decided in 1973, led to a head-on confrontation over a matter of principle. The then Government, in its drive for land reform and socialism, cared two hoots for guarantees under the Constitution. Ultimately, it led to three senior judges of the Court being superseded when a new CJI was appointed that year. The political firestorm that resulted from the events of the time ensured one thing: no government since then has dared to touch the seniority principle in appointing the CJI.

Much has changed since the 1970s: the executive has very little say in appointing judges to the higher judiciary now, something that has created its own set of controversies. In the days after the four judges went public with their dissent, it was speculated that this crisis would give the current Government a handle to ‘interfere’ with the judiciary. So far, there is no sign of that and the ruling dispensation in Delhi has made it amply clear that the judiciary ought to settle its problems internally. The comparison between the controversy the court finds itself in right now and the tumult of the 1970s is thus far-fetched. Today, the crisis is one of judges’ own making and not of ‘outside’ intervention.