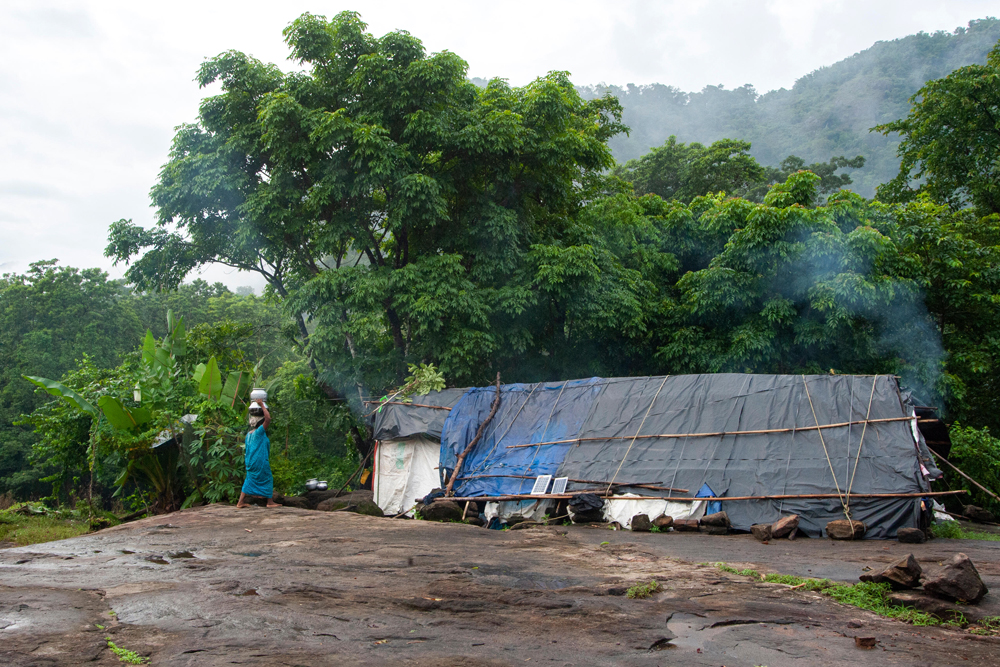 In their continued efforts to win over tribal people and carve out a sanctuary for themselves in Kerala, Maoists have struck again this time, vandalizing a villa in the hill district of Wayanad, Kerala, set high on the Western Ghats. Forests in this region are connected to those in Karnataka and Tamil Nadu covering various districts that are home to a large number of tribal groups.

On the morning of January 15, Maoists went on a rampage by breaking the windowpanes and stuck a poster in the villa warning locals against sexually exploiting tribal women. The villa near Meppadi town of the district is owned by a person residing in Bengaluru, police said. Tribals in the Western Ghats region, especially in Palakkad district, have an affinity for Maoists in return for helping them out whenever they are tormented by local officials and settlers.

In Wayanad, too, although police have done outreach programmes for tribals, Maoists enjoy goodwill among them. The foremost reason cited by senior government officials is the apathy of lower-level bureaucrats who are known to discriminate against tribals.

Maoists find Kerala a safe haven thanks to the support they get from civil society that has romantic notions about Maoism. Besides, since Maoists haven’t yet co-opted tribals and launched any large-scale attacks in the state, they are not perceived as a major threat to law and order in the state. The intention of the Maoists here, according to intelligence reports accessed by Open, is to create a zone where their comrades fleeing the Red Corridor, meaning Maoist-infested states in Northeastern, western and central India, can bide their time. Maoists are increasingly under attack in their strongholds of Jharkhand, Chhattisgarh, Maharashtra, Madhya Pradesh, Andhra Pradesh and Odisha by police forces that have stepped up action. Having lost large tracts of territory to the forces, Maoists are on the run in several of these former bastions.

In Kerala, the state government has taken cognizance of this “menace”, senior police officers have told Open. Which is why it had launched multiple attacks on Maoists over the past several years to “nip the problem in the bud”, a senior state intelligence officer said.

Speaking about the latest incident involving Maoists, Bijo Alexander, DySP (Special Branch), Wayanad, said he was not aware of any recent incident in which any tribal woman was harassed or sexually assaulted by anyone. He, however, added that he was not aware of any outsiders making such an attempt. Alexander said the place where the attack took place — Nadukaani, near Meppadi town — is home to a tribal colony where four families live. “They belong to the Kattunaikan tribal community and the Meppadi police have adopted that colony. They ensure regular interaction with them,” the officer told Open.

The poster stuck on the villa in the name of Maoists’ Nadukaani area committee has warned of dire consequences if anyone tried to ever treat tribal women as commodities. The poster alleged that someone at the villa had wooed tribal women promising them free rice.

Asked about the influx of Maoists from other states to Kerala, which Open had reported last month, Alexander was non-committal, but he conceded, “Our men have spotted some new faces, but not many.” Since the forests in Wayanad offer easy access to other states, he said, it is possible that Maoists keep moving from one state to another through these forests.

Last March in Wayanad, the Kerala police’s elite Thunderbot forces had killed a Maoist near a resort in Vythiri, not far from Meppadi. Police had alleged that CP Jaleel, the Maoist who was killed in a shootout, had gone to the resort to extort money. Last October, Thunderbolt commandos killed four Maoists in two separate encounters near tribal hamlets of Attappadi in Palakkad district. Those shot dead by the forces hailed from Karnataka and Tamil Nadu. Tribals had claimed that most of them were killed in a fake encounter, an assertion that police dismiss. Four years ago, police had killed two Maoists in the Nilambur forests of Malappuram district.

According to reports, Maoists have over the years set up four squads – that they call dalams – in the forests that cover bordering areas of Karnataka, Tamil Nadu and Kerala in the northern stretch of the Western Ghats. These forests offer unhindered movement for the Maoists where policing is arduous thanks to the difficult terrain.