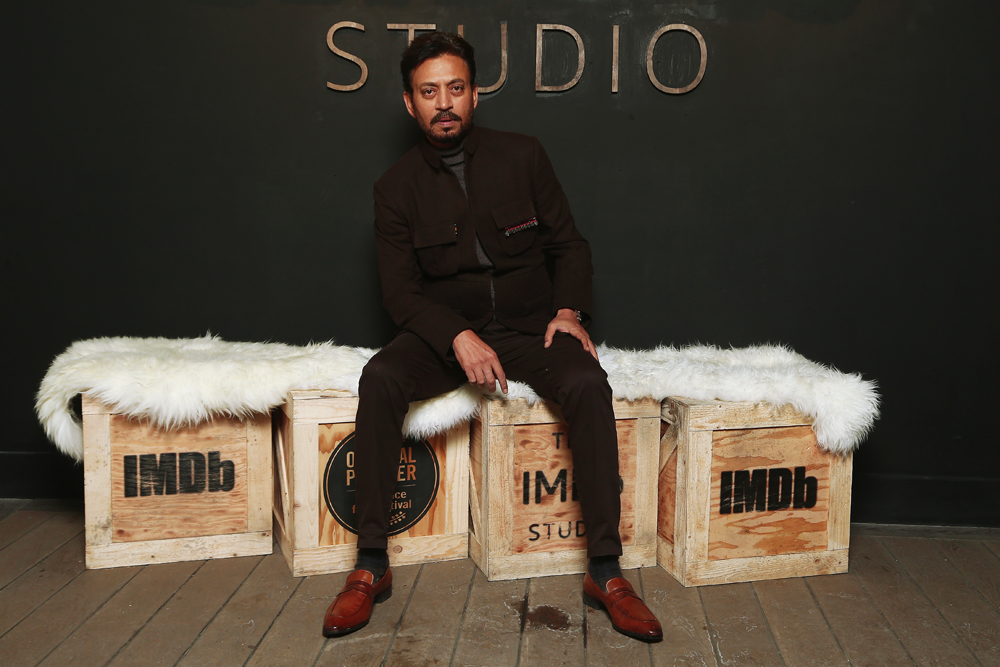 
On April 29, 2020 actor Irrfan Khan, 53, who was battling neuroendocrine cancer for more than two years died at the Kokilaben Ambani hospital in Mumbai. He is survived by his wife Sutapa Sikdar, and sons Babil and Ayan.

Irrfan has performed in Indian and international films for over 34 years. His death leaves an irrevocable void in the world of film and the hearts of film lovers. Soon as the news came in, social media erupted with tributes from directors, actors and regular cinema buffs who fell in love with him through his inimitable characters. All the tributes had one thing in common: they felt like Irrfan was part of their world, even if they had never met him.

Perhaps that is why he managed to stay relevant and revered till his very last film Angrezi Medium (2020). With more than 80 feature films, and 27 television shows to his credit, Irrfan was one of those actors who embodied his characters completely. He would become them. From Maqbool (2003) to Ashoke Ganguli in The Namesake (2006) to Paan Singh Tomar (2012), to Saaajan Ferdnandes in The Lunchbox (2013), to Rana in Piku (2015), his characters spoke to us, and often lingered in our minds much after the films. In the world of Bollywood where actors often became synonymous with their stardom, Irrfan simply chose to perform, no matter how big or small the part was.

“I remember this scrawny young boy auditioning for me during Salaam Bombay (1988). He was unassuming, almost unaware of the fact that he was performing. He had this unique ability to just embody the environment he was part of, so much so that you would not notice him on set, unless you were really looking for him. When I had to edit out a few of his scenes from Salaam Bombay, I walked up to him and said that I was sorry. He had tears in his eyes, it was his first big break and it seemed like it wasn’t going to materialise. When the film was out, he called me and cried once again, and this time it was out of joy. We did The Namesake after that, and I will never ever forget the moments I spent with him. He made me and my stories better, and there will be nobody like him,” says director Mira Nair who is often credited with having discovered Irrfan.


Irrfan was always a student of life and always looked for ways to unlock the mysteries of the human mind. Be it through his performances or otherwise. He spoke of letting go of material desires and aimed to live life beyond the name and fame he received.

Born in Jaipur to a family with no connection to the film world, Irrfan recognised his love for acting when he was a teenager. His father was unimpressed with his choice to pursue a course at the National School of Drama (NSD), but his wish prevailed over all obstacles.

Piyush Mishra, who was a few years his senior at NSD remembers him as the boy who spoke little. “Many of my juniors from NSD would talk about him as the boy who didn’t say much. He was always anxious and a little disturbed about his future. I remember watching him in a play and thinking that the methods of NSD were far too restrictive in nature to accommodate what this boy was capable of. It was after he passed out of the school that Irrfan really found himself,” he says.

While his fellow actors were mesmerised by the magic of the stage, Irrfan often confessed that cinema fascinated him, and his only aim was to woo the camera. Tabu, his co-actor in multiple films, had once told me that Irrfan was the kind of actor who was so supportive in a scene, that she became better thanks to him. “I remember during Maqbool, there was a scene where I realised I’ve lost my child and I had to break down. He held me down and made me feel so secure in that space that I could cry my heart out in that scene. There are only one or two other actors who I have worked with who are that giving and secure with their co-performers,” she had said.

Malayalam actor Parvathy Thiruvothu who acted with Khan in their film Qarib Qarib Single (2017) echoes this sentiment, “He was the most generous co-actor I’ve worked with. His absolutely childlike joy in peeling the layers and diving into the script, in taking risks was infectious. We’ve lost one of the finest actors. It’s a void that can’t be filled. I salute him and his undying artistry. Always,” she says.

Among a handful of actors, including Naseeruddin Shah and Om Puri, who broke boundaries, Irrfan was respected by international filmmakers alike, and was even part of the Spider Man franchise. Irrfan once shared with me how Ang Lee famously called him a “chameleon”, who would surprise him with his interpretation of scenes during their film Life of Pi (2012). Irrfan had said to me about his experiences in Hollywood, “I don’t put up a face when I go abroad. It’s the one thing I strived for during my learning days. To find my truth. Even today when I stand on the podium with five other stalwarts, who I look up to, I try to remain true to myself and I guess that’s what they appreciate.”

In 2011, he was conferred with both the Padma Shri for his contribution to the arts, and in 2013 he got the National Award for his performance in Paan Singh Tomar. He wore all his accomplishments lightly. Actor Kritika Pande who worked with him in Song of the Scorpions (2017) remembers Irrfan as being open to every little experience. “I learnt from him that it was okay to relax on sets, ‘Tabhi toh acting ho payegi, (Only then will the acting happen),’ he said to me. I would watch him reading a book after pack-up every day, by the window in a moving car, his spectacles intact and breeze flowing through his hair.  He would be so into the story and I would often think, ‘Look at him consuming a story even after the day has packed up.’”

Actors across the board from Manoj Bajpayee to Amitabh Bachchan to Sanjay Mishra to Shabana Azmi have poured their hearts out online expressing the deepest condolences to Irrfan’s family. Mishra remembers riding in Irrfan’s first Maruti 800 where they sang a song together, “Nafrat ki duniya ko chodkar pyar ki duniya mein, khush rehna mere yaar.” Homi Adajania, the last director to work with him, wrote a tribute, “You once told me you had an inexplicable love for your craft, but didn’t want the stardom anymore. You never needed to be a star my friend, because you shone brighter than anything in the universe.”

The last time I met Irrfan was in 2015, the year of Piku. He was surrounded by media professionals, but he was comfortable rolling his last cigarette for that afternoon before heading for a photoshoot. His eyes were piercing and forced you to focus on the conversation, without distractions. When I asked him if he really believed he could do anything, he said, “I don’t want to be able to do everything. I want to create something, break it, create and then break some more. Why look at mastering anything? Life is perishable. You will anyway become a story in some time. So why not become a great one?”

You left us with a great story and thank you for that.