The Well-Connected Cops of Bengaluru

The Twitter handle of the city police is about to cross a million followers. Meet the team of constables behind the makeover 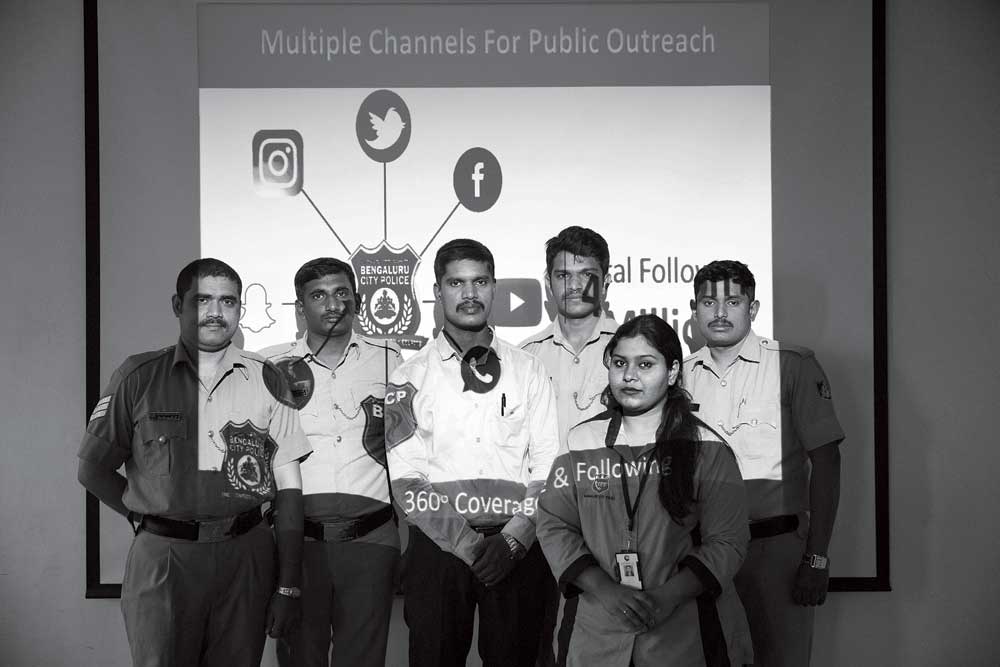 LOKESH HM THOUGHT long and hard before posting his latest handiwork on Facebook. On the morning of November 17th, he took the elevator to the fifth floor of the Bengaluru City Police (BCP) Commissioner’s Office building and booted up his computer. Would the message be too cryptic for some, he worried. Would it spark a troll fest? It was only a couple of days since the last graphic he had shared on behalf of the Bengaluru City Police backfired on social media. Followers of @BlrCityPolice found the GIF of Homer Simpson squinting suspiciously, with the caption ‘Every move you make, every rule you break is being noted. Be warned!’, creepy, puffed up, and a tasteless rip-off of a song by The Police. In a reply to the post, someone shared a viral video of a Traffic Police vehicle flouting rules; another invited the police to take note of all his movements including his bathroom breaks. “It is hard enough to do social media well as an individual, but it is much harder to do it for a government agency,” says Lokesh, 30, the constable who coordinates the social media unit of the Bengaluru City Police, brushing off questions about the repercussions of a post gone wrong. He hoped, though, that he would hit pay dirt with his cool new graphic. ‘Don’t fall in line’, it warned, above super-sized lines of cocaine arranged on a black background. ‘All your friends trying it out? Be the smart one, stay out’, it further spelled out, in case you thought the lines were a zebra crossing next to a mound of garbage (“It did happen,” Lokesh says). The meme was an instant hit, with over 2,000 shares across networks, and congratulations—‘Savage, BCP!’, ‘These guys are lit AF’—pouring in even as Lokesh and team worked away on their next project, starring Joey Tribbiani plugging his ears in vehement disapproval of horns on #NoHonkingMonday.

As tools of citizen engagement and complaint redressal, perhaps no government social media handle is as impactful as those of the state and the city police departments and the officers who run them. No longer mere channels for providing reliable updates in times of unrest—and during peak hours—Twitter and Facebook have emerged as virtual community spaces where the police try to establish a closer connect with the public by proactively sharing information, encouraging people to report offenders, and posting updates on follow-up action. Thrown into the mix is a feel-good dose of PR about cases solved in record time and felicitation of exemplary officers. “We get only about 60 complaints a day through social media channels, but there are hundreds of suggestions, queries and messages from trolls,” says SH Viswanath, a constable who is part of the BCP social media team. “We sift through all of this, reply to and forward relevant messages tagging the officers concerned, share what senior officers post, and create our own content.”

Bengaluru City Police, the first successful social media story in Indian law enforcement, are about to hit a million followers on Twitter. With 72,000 tweets since August 2012, the handle had crossed 985,000 followers at the time of going to press, with hopes of adding another 15,000 before the year-end. Mumbai Police, who traced BCP’s steps by hiring a social media agency in 2015, may have crossed four million followers, but the BCP team has no parallel. “We started in a small way in 2011 and got serious only in 2014. From being the only one on social media duty, we got a team of 12 constables working in shifts round the clock,” says Lokesh, who joined the police force after two years at a BPO. “Now we reach 4 million people in Bengaluru—40 per cent of the population— through all our social media accounts, including our WhatsApp helpline, which is popular with the non-tech-savvy.”

Located in one corner of the command centre—the city hub for tracking calls to the number ‘100’, the real-time locations of the city’s 200-plus patrolling vehicles, news reported by TV channels or captured on CCTV, and, of late, social media analytics— the social media unit is a seemingly uninspiring room with a few computers and a projector screen. Here, at any time of the day, one would find four or five young officers in uniform glued to 7-inch tablets, smartphones and multiple-screen PCs, typing furiously, tinkering with graphics, and scrolling endlessly. They are shy and make poor conversationalists, their attention wavering with ping after ping, as though they were waiting for a virtual rescue. Like his colleagues, Viswanath, 27, prefers to converse in Kannada. He studied Kannada literature in college and dreamed of a government job. “When the commissioner was expanding the social media team in 2014, I requested to join, out of interest,” he says. A Horn of Gondor reference written into a message about honking, and the Hulk as mascot on a cringe-worthy warning aimed at pickpockets would have been lost on him three years ago, but thousands of hours spent trawling the social web were all the English education he needed, he says. “I don’t watch Game of Thrones or The Lord of the Rings but I know the story and the characters because they are big sensations on social media. I have never watched The Simpsons either, but we use these TV shows in our posters because of the recall the characters or the dialogues have,” he says, laughing self-consciously.

“We are trained to wield guns and lathis, but dealing with online mobs is totally different” – Lokesh HM, coordinator, BCP social media team

A JOKE, EVEN A middling one, will resonate if rooted in shared experience. And when a law enforcement agency channels the anarchy of the internet, you tend to notice. John Cena and doge memes belonged on Tumblr; could they actually prove useful? “The intention is not to entertain, but to serve. Using memes, catchy pop culture references and new-age copywriting for social messaging around drugs, drunk driving, trolling, etcetera, puts us on the social media radar of young people in the city, and somewhere, they begin to realise that we are acting against offenders on all these fronts,” says DCP MG Nagendra Kumar, the command centre and social media unit incharge. “Besides, through such means, we promote awareness of services such as the Suraksha SOS app for women who can summon help at the click of a button.” The BCP do not seek professional help for their social media outreach, he says, because they believe only policemen can grasp the spirit of the department. “We haven’t trained these constables in social media skills, and yet, they have developed a good sense of what is appropriate to post and what is not,” Kumar says.

“It is commendable that Lokesh and his colleagues keep abreast of the latest on the internet,” says Sanchika Pandey, who manages social media for the Mumbai, Pune and Thane police. “It is a bold decision for any government department to put themselves out there on a public platform and directly interact with citizens,” she says. In 2015, when Pandey was working on a social media strategy for the Mumbai Police, she realised they could use humour to break the ice and change the perception of the police as an unapproachable lot. “Across India, police departments are opening up to suggestions and feedback. The Mumbai Police’s Twitter account was the first to be monitored 24×7 and now others have followed suit. Going social has changed the way people look at police now and it’s heartening to see this change,” Pandey says.

Lokesh and his team are aware they command more respect within the department than the average constable. “It is partly because we are the unofficial digital tech support for the office,” says Ravi KN, 27. From shopping to banking, Ravi rarely looks beyond his smartphone. “This team carries a huge responsibility. Take Lokesh—he is a constable but he acts like an officer. That is the level of competence you need in a social media team. At the same time, it is not wise for a government department to blow money on consultants and celebrity tweets. BCP’s success, therefore, is exemplary,” says Ramesh Mastipuram, SP in-charge of social media for Telangana Police. Other state police teams have visited the BCP social media unit to observe how it functions—like a lean start-up on a shoestring budget, scripting success against the odds.

BCP gained social media credibility during the riots in the city over the Cauvery water sharing dispute in September last year. Even as TV channels repeatedly flashed visuals of burning buses and declared the entire city unsafe, BCP’s social media wing debunked alarmist hoaxes circulating on WhatsApp, posted verified updates on the situation, and shared pictures of police marching through affected areas to inspire a sense of security. “We got more than 62,000 new followers in just those four-five days,” Lokesh says. Although they are flagbearers of social media engagement, some of their most impactful work, says Ravi KN, happens behind the scenes. Six months ago, they foiled a suicide attempt by a man who had sent them a disturbing WhatsApp message. Only days ago, a panic-stricken man locked inside his house on Magadi Road sent them an SOS about a burglar. A patrol vehicle was dispatched and the thief caught within minutes. “Two days ago, we saved a woman who had been thrown out of her home by her husband. She was on the street with all her belongings,” says Ravi. But the course of action is not always so clear. “We are trained to wield guns and lathis, but dealing with online mobs is totally different,” Lokesh says. All original content must be approved by the DCP before they can publish, but they retweet and refer as they see fit. It is easy enough to let slide a peremptory complaint about a neighbour’s dog, but how should they respond to queries about the high-profile investigation into journalist Gouri Lankesh’s murder? Should they react to a politician’s post about a law enforcement incident, or report an abusive youth? Should they give in to moral policing by a section of people against drunk driving advisories, apparently because they can be perceived as promoting drinking? Such choices plumb the depths of their convictions every day. “Every word we write is scrutinised by people. It still makes me nervous after three years of doing this full-time,” says Ravi, a self-taught graphic designer.

Lokesh, the architect of the social media effort within BCP, is excited about reaching a million followers and starting something fresh next year. “We may try to do a live chat session with the Commissioner when we hit the mark,” he says. “We have a few more secret tricks and treats up our sleeve.” A good meme unfolds slowly, never all at once. So should a meme maker.