Wrath of the Saffron Fringe 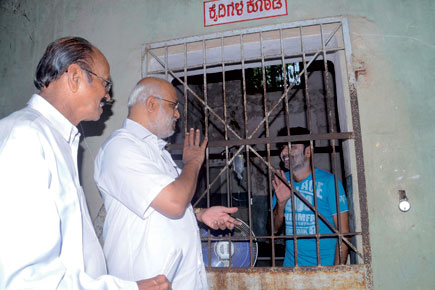 
Naveen Soorinje, A 28-year- old journalist, was arrested on 7 November last year, three months after he filmed members of a rightwing Hindu group, the Hindu Jagran Vedike (HJV), beat up girls and boys at a birthday party in a homestay in Mangalore because they thought the boys and girls were indulging in an ‘immoral’ activity. Soorinje, a reporter at a Kannada news channel whose film footage was used by the police to identify the culprits, has been in jail ever since, denied bail.

Even behind bars, Soorinje follows incidents of moral policing on the streets of Mangalore through friends and colleagues who visit him everyday with news and hot lunch. “There are four similar incidents that have gone unreported recently,” he says, speaking to me during visiting hours at Mangalore Jail, “These stories have to be told.”

Among those who agree is BV Seetharam, the 57-year-old editor of the Kannada daily Karavali Ale who has continued to print, distribute and sell his afternoon paper (circulation: 42,000) despite threats after it ran a series of articles linking an HJV leader to a drug racket.

In the coastal town of Mangalore, Soorinje and Seetharam are now regarded as the two leading exponents of media freedom. They have also brought the spotlight back on a decade-old problem in Dakshina Kannada district and Mangalore city—street vigilantism by groups claiming to be saving society from ‘love jihad’ and an ‘erosion of cultural values’.

On 6 February, Karavali Ale led with a story on a network of drug dealers in and around Mangalore. Its headline: ‘Hinjawe mukhanda drug dealer’ (Hindu Jagran Vedike leader is a drug dealer). It was followed by two more reports that indicated this network was being run under the patronage of the HJV leader Satyajit Suratkal. “Our reports came following the death of a young drug addict,” says Seetharam. “It was ironic that the very same organisation that was going around town tracking youngsters and alleging they were using drugs should be run by a man we knew was extending patronage to the person arrested in the [case of the] young girl’s death. So we reported what everyone knew but did not have the courage to say.”

The next day, on 7 February, an employee of the paper, Harish Putran, filed a complaint at Suratkal police station saying he had been attacked while on his way home from work. Since then, the paper has suffered a series of threatening calls, attacks on its reporters and attempts to thwart its distribution. “My vendors have been threatened and it has become very difficult to bring out the paper,” says Seetharam. “In fact, because of the attacks, I am short staffed and have reduced the number of pages from eight to six. There have been attempts on my life, and there are so many cases in court against me that this has become a day-to- day battle. But we are not giving up yet.”

Neither is Soorinje, who once did a stint under Seetharam at Karavali Ale before moving to television journalism. In the homestay case, the birthday party was broken up by about 50 HJV-affiliated men who beat up the boys and slapped the girls around. Soorinje’s footage, which aired on Kasthuri Newz 24, helped identify the assailants and led to their arrest. “If we hadn’t shown that footage every half-an-hour,” says Manoj Kumar, editor-in-chief of the channel, “the culprits would not have been identified.”

But three months later, Soorinje was picked up by the police on his way back from an assignment, and his name was added to the case’s chargesheet as accused No 44. Based on a complaint filed by one of the boys at the birthday party, the journalist has been charged under various sections of the Indecent Representation of Women Act of 1986, the Unlawful Activities (Prevention) Act of 1967, and some sections of the Indian Penal Code.

Though the Karnataka cabinet decided to drop all charges against Soorinje a month ago, Chief Minister Jagdish Shettar’s signature on the relevant documents is still awaited. The state government says it is just a matter of time before it will be done, but observers allege that pressure from local BJP leaders—who are gearing up for the upcoming Mangalore Corporation polls—has resulted in an unseemly delay. The BJP’s local MLA J Krishna Palemar has said that Soorinje will not be released till the other accused are also granted bail.

Meanwhile, Soorinje has been in Mangalore jail for three months. His arrest, he says, caught him by surprise. “I would get so many tip-offs from sources, but in the case of my own arrest, I was not prepared,” he says, “I had got a tip-off about the birthday party and the possibility of an attack by the Vedike boys. Later I heard rumours about my possible arrest, but senior police officials told me that no such thing was being planned.”

In his defence, Soorinje has repeatedly said he did try informing the police about the homestay attack. He has also emphasised the fact that he was outnumbered by the assailants and could not have done more than faithfully record what was going on at the venue.

On 27 December, he was denied bail by the High Court on the grounds that it was not in ‘public interest’. So stated the court: ‘Thus, their statements (of the victims who filed the complaint) prima facie indicates that the damage caused to their reputation in telecasting the incident is more than [that of] the actual incident. The incident on account of its wide publicity via TV channels appears to have created great… fear among the public in general and young boys and girls in particular.’ The order also stated that prima facie material did not ‘project accused No 44 as a whistleblower’.

Editor-in-chief Kumar defends his reporter, saying: “He did his job, and the decision to repeatedly telecast the footage was not his. It was an editorial decision. What we see happening in Mangalore is just an RSS-BJP hungama. Naveen has leftist leanings, and given the ground reality of Mangalore, he is being targeted [for it].”

As a writer and activist, Professor K Phaniraj has been tracking this ground reality for years. “Before the 90s, there was no Bajrang Dal in Dakshina Kannada, and though the Hindu Jagran Vedike existed, it was not what it is today. In the early 90s, when the Hindutva agenda was gaining ground in the region, it met with no resistance. Slowly, they were able to infiltrate the minds of common people. By the end of the 90s, the Bajrang Dal was in place, the Hindu Jagran Vedike was more active, and recruitment was on in full swing for street-level militant groups that act as the moral police today.”

These Sangh Parivar outfits have taken in youngsters of the ‘backward’ Billava and Mogaveera communities and inculcated them with their Hindutva ideology. “There is evidence all along the national highway that runs along the coast,” says Professor Phaniraj. “In the 90s, every autorickshaw stand you came across had a CITU flag, indicating their Marxist leanings. Today, every red flag has been replaced by a saffron flag, showing their Hindutva affiliation.”

The Suratkal riots of 1998, in which 18 people were killed after a clash between Hindus and Muslims, were a turning point in Dakshina Kannada’s descent into communalism. Hindu-Muslim polarisation was also a factor seen in the BJP’s rise to power for the first time in Karnataka in 2008. Many consider the arrest of Soorinje and the attack on Karavali Ale direct fallouts of their reports against communalism.

Seetharam says that it was around the same time, in the late 90s, that his general ‘anti-establishment’ stand in the paper took on the role of activism. “We could not imagine ourselves on the side of communalism and, in a manner of speaking, we did start taking sides. We had always been writing anti-establishment stories, but now they started reacting differently. My press was even torched once,” he says. His stance, he adds, resulted in his being branded a ‘blackmail journalist’, even a short stint in jail. “But I really don’t care,” he says, “There are moments of despair and today I am in court more often than in my newspaper office. It is difficult. And in a recent emotional editorial, I have told my readers that I may not be able to sustain this. But I have also promised them that I will not let them down.”

One such reader is Suresh Bhat, a member of the Mangalore chapter of the People’s Union of Civil Liberties (PUCL) who tracks communalism in the area. “Karavali Ale is the only paper that would flag any communal incident in the region,” he says, “and they have done it consistently. Of all reports related to communal violence in 2012, including cases [of] moral policing and cattle smuggling, most have been reported by it.”

Soorinje was doing likewise. Having moved from the print media to television, he finds that visual images are more evocative—if given the requisite airtime. “There is only impact if these incidents are continuously highlighted, even if it means sensationalising them a bit.”

While Soorinje looks at filing a fresh bail plea and Seetharam works out how he can get back to printing eight pages, Franklin Monterio, vice-president of the BJP’s minority morcha, justifies moral policing. “We reject the term ‘moral policing’. What does it mean anyway?” he asks. “When we get information about cases of love jihad or drug use, what are we expected to do—watch the scene or react? We always inform the authorities, but they take time to arrive. We can’t just stand and watch. Things that start at an ice-cream parlour or a movie hall lead to other things.”

Monterio mentions a network of informers who tip the group off on such cases. “We can tell from the body language of a couple,” he says authoritatively. “Our boys only ask couples of their relationship and are on the lookout for love jihad cases, where a Muslim boy entraps a Hindu girl and exploits her. But yes, sometimes our boys make a mistake and rough up couples. But that is not their intention to start with.”

Mangalore city’s Corporation area has a resident population of around 100,000. An educational hub, it has nearly 100 colleges offering professional courses, 190 other degree colleges and tens of thousands of students attending them, many of them boarders from other places.

Monterio estimates that there are around 5,000 members of the HJV in the city corporation area and an equal number of Bajrang Dal activists. These men, mostly in their twenties, are ‘educated’ on religious and ‘moral’ behaviour, asked what they would do if their sisters were exploited, and sent off suitably charged, to protect ‘Indian values’.

Sharan Pumpwell, vibhag sanchalak of the Bajrang Dal, Mangalore, calls it an exercise in ‘creating awareness’. “We are doing good work, given the number of girls who go missing from this region,” he says. “And in most cases, we have the support of the girls’ parents.”