Whose Dome Is It Anyway?

Some of Delhi’s protected monuments seem to have reopened for worship. The law is clear on the violations, but the lawmakers are not. 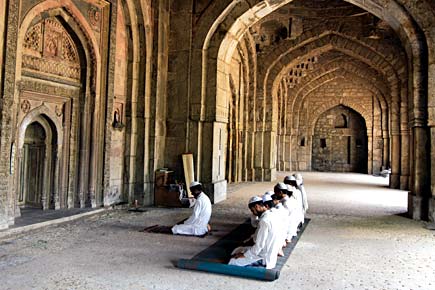 Some of Delhi’s protected monuments seem to have reopened for worship. The law is clear on the violations, but the lawmakers are not.


Something has been happening at some of Delhi’s prime archaeological locations. It began earlier this year. Within the space of a week in March, several medieval-era mosques suddenly saw gatherings that they hadn’t for centuries: crowds of people in caps and orderly rows offering namaaz, the Muslim prayer routine. On 17 March, around 200 namaazis stole into the Muhammadwali Masjid at Siri Fort for Friday prayers. Likewise on 23 March at Jamali Kamali mosque in the Qutab Minar complex, near Balban’s tomb. The Sultanate-era Nili Masjid in Hauz Khas, which has had daily prayers since 2004, saw its namaazis swelling.

The pious responding to the call of the muezzin? No doubt. But, be that as it may, a 1958 law forbids it. The Ancient Monuments and Archaeological Sites and Remains Act states that no religious installation or worship is legally allowed where it had once ceased. The law’s intent is to protect such ‘non-living’ monuments for the sake of historical interest. “Once worship or prayers start, people start affecting the shape of the place,” says writer-filmmaker Sohail Hashmi. Despite FIRs lodged by the Archaeological Survey of India (ASI), which owns and oversees these monuments, Delhi Police has made only weak efforts to intervene.

According to imams and maulvis at these mosques, who belong to Jamiat Ulema-e-Hind, an organisation formed in 1919 in support of Gandhi’s Khilafat Movement, the Wakf Board owns the buildings. “Due to migration, the Muslim population of Delhi has increased and there aren’t enough mosques,” explains Matin Ahmed, chairperson of the Delhi Wakf Board and Delhi state Congress leader. “How can I tell people not to pray at a mosque? As for the properties the ASI is claiming as ‘protected’, we have Gazette notifications showing they are also under the Wakf. Tourists go there wearing shoes… what is the problem with namaazis who pray barefoot?”

The problem, says Hashmi, has to do with the mosques’ upkeep. “Take the case of four mosques built by Juna Shah Telangani, a noble in the court of Firoz Shah Tughlaq (1309–1388),” he says, “two of them are protected and two are not. You can see the difference.”

Kali Masjid in old Delhi’s Turkman Gate and a Jama Masjid in Nizamuddin are the two that are not ASI-protected, since they were deemed ‘living monuments’ in 1958, daily namaaz being conducted there. Both these mosques have been painted green, pink and blue. The Kali Masjid even has garish marble chips embedded in the front gate. There are also steel brackets with ceiling fans that have been added, plus a concrete construction that’s quite out of place. The domes of Kali Masjid have been painted green, and several families live in the basement. “Who will recognise it today as the finest example of Tughlaq architecture?” asks Hashmi.

THE LONG AND SHORT OF IT

In the late 13th century, when South Asia’s famous Sufi saint Khwaja Muinuddin Chishti was leaving Delhi for Ajmer, he asked his disciple Qutubuddin Bakhtiar Kaki to follow him. The people of Mehrauli, which was all of Delhi then, said they would follow Kaki. Upon this, Chishti asked Kaki to stay back in Delhi. The Mehrauli area came to be known as ‘Qutub sahib’. Nizamuddin Auliya was Kaki’s disciple’s disciple. It is in Mehrauli that Kaki died and was buried, and that’s how this area became such a favoured burial zone—all the way till the days of the last Mughal, Bahadur Shah Zafar, who wrote poetry to his unfulfilled dream of securing just six yards of ground there. Even today, there are some diehards who want Zafar’s remains to be brought from Yangon and placed at Zafar Palace, where he wanted his mortal remains to rest.

Mehrauli has seen a thousand years of construction, and is a prime location for archaeologists and historians to study a period so amenable to modern examination, thanks to its architectural legacy. Even the subtleties of calligraphy offer clues of medieval thought and practice that no other source possibly can (paper documentation is a marker mainly of the Mughal era). Several monuments—still to be excavated, conserved and studied—exist in what is called the ‘Mehrauli Archaeological Park’.

Among the noteworthy mosques there is Jamali Kamali, next to the Sufi saint Sheikh Jamaluddin’s grave. This mosque marks an important link between the Sultanate and Mughal periods, and deserves closer study. Yet, with prayers now being held by around ten people every day, three times a day, this is becoming difficult. On Fridays, there are often as many as 200 people. On the jumma of 24 July, we found freshly cooked biryani being served (!) on paper plates to some 100 people. We were stopped from taking pictures. “If this is not stopped,” warns Hashmi, “you will soon find a maulvi living here with his family.” Of critical concern is the monument—nails have already been hammered into its interior walls, despite the fact that any such vibration threatens its architectural finesse.

The ASI needs to take charge, and quickly. Its field officers who tried to file FIRs are surprised at the police’s indifference. On 30 March, a letter was written on the issue to the Delhi Police Commissioner. On a 24 July visit to Jamali Kamali, we saw namaaz. There were no cops to be found. “We have taken legal action against whoever has broken the law,” says a Delhi Police spokesperson. It’s all he’s willing to say.

THE RULE OF LAW

What about the Government? The Union culture secretary has written to Delhi’s Lieutenant Governor (LG) Tejinder Khanna. “The LG has asked the Delhi Police Commissioner to strictly implement the prevailing law and maintain communal harmony,” says Ranjan Mukherjee, officer on special duty in the LG’s secretariat.

With the ASI ringing the police every now and then, the imam at Jamali Kamali, Abdul Raziq, finally met the superintending officer of ASI’s Delhi circle, Muhammed KK, with the plea that the Wakf Board had allowed the prayers. Muhammed simply gave Raziq a rundown of his track record as an ASI officer, upholding the law. Whether it was a church, temple or a maqbara in Sasaram, Bihar, where the Vishwa Hindu Parishad once wanted to offer puja claiming it to be a temple, he had always adhered to the legal position, as it should be. Raziq was unimpressed. “A masjid is forever a masjid,” he insists, proudly showing a letter by Union Minorities Affairs Minister Salman Khursheed asking Delhi Chief Minister Sheila Dikshit to look into problems faced by them in offering namaaz.

Little wonder that the Mehrauli Archaeological Park is turning into anything except a study zone. At the Mandi mosque, we even found people cooking. At Rajon ki Baoli, namaazis leave their prayer mats behind—markers of a claim. An old unidentified mosque that Intach would have restored, is now a madarssa. Another large unidentified old building was taken over just before Intach was about to start restoration—and yet another was taken over after restoration, only to be whitewashed and thus shrouded from the gaze of historical scrutiny.

A small mosque close to the Qutub Minar has been painted over for many years. A maulvi who sits there every day distributing talismans, Maulana Shair Mohammed, claims he’s been performing namaaz at the site for 33 years now, something the ASI denies. This complex is a particularly sensitive one, given the Quwwat-ul-Islam mosque there that bears archaeological remnants of idol-bearing stone carvings that were used in its construction. Some Hindus have been demanding the right to worship what they see as a deity’s idol—in reaction to namaaz being allowed at the small mosque. Hindu-Muslim altercations have already taken place. “This has the potential to open a Pandora’s box all over the country,” says KK Muhammed of ASI. “There will be demands from Buddhists at Ajanta, Hindus at Konark and Elephanta, and in Ellora, Hindus, Jains and Buddhists could all lay claim,” he says.

That could be a setback for serious academic enquiry into India’s past. A recent release from the activist group Sahmat, signed by Irfan Habib, DN Jha and others, has appealed to the Prime Minister, who is also in charge of the culture ministry, to keep things from going out of hand. AGK Menon, convenor of the Delhi chapter of Intach, cites the case of the Taj Mahal as a precedent. The monument complex has a mosque, which is closed to prayers on Fridays. “If prayer is to be continued at all, then ensure that people don’t make any changes in the monument at all,” he says.

WHAT INK IS WORTH

Some of Delhi’s over-enthusiastic namaazis, however, don’t think that ASI is very sensitive to damage done to old monuments, given that the Delhi circle’s own office is comfortably ensconced inside Madarssa Safdarjung. Incidentally, Friday prayers are also held at this site—after an order from the Prime Minister’s Office, as an old ASI hand remembers. The rules evidently bend to political whim.

Haji Aminuddin claims to know how this story began. In 1978, he was a teenager “when 10-12 of us kids got together and offered namaaz at the Bhuri Bhatiyari Masjid” located on the campus of Maulana Azad Medical College. The doctors called the cops, but Aminuddin and his friends launched such an agitation that the Government gave them the go-ahead. They formed a Masjid Basao Committee—after courting arrest several times—and even managed to get the land area around the mosque increased. Members of the Committee became Congress politicians. One became a Wakf Board chairman and the Jama Masjid’s Abdullah Bukhari became its patron. Aminuddin remembers the day in 1983 when he met Indira Gandhi, who asked him to support the Congress. Amongst the people who fought cases pro-bono for him was HL Bharadwaj, who later became law minister.

The Committee worked to revive prayers at mosques all over Delhi. Aminuddin remembers how his group started prayers at the ASI-protected Kotla Firoz Shah mosque. “We took a welding machine and cut iron bars and entered,” he says, “The ASI keeps getting them welded and the community keeps breaking in every now and then, even today.” Historical detail matters little to him. He is not aware that the mosque’s architecture was liked so much by Timur that the 14th century invader took back a map of it (with Delhi artisans) to have it re-created in Central Asia.

So the current Wakf Board chairperson, Matin Ahmed, is only doing what has been done before. Making the most of political patronage—which the Congress is ever ready to offer the faithful.It is sad, however, that such piety fails to acknowledge the value of scholarship, of intellectual enquiry, of archaeological interpretation that could yet spring a surprise on modern academia if no harm is done unto these fine monuments by the pious man’s own follies of disfigurement.