This election has seen leaders slug it out on social media like never before. Clever parodists and faceless trolls too were at play 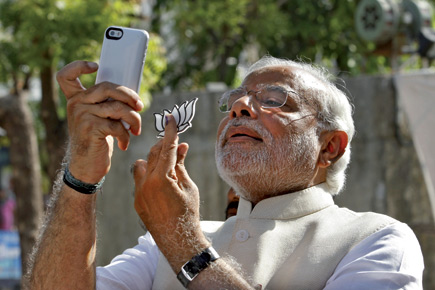 This election has seen leaders slug it out on social media like never before. Clever parodists and faceless trolls too were at play


This election has seen leaders slug it out on social media like never before. Clever parodists and faceless trolls too were at play

There must be moments when Mitt Romney must ask himself— perhaps while nursing a glass of something—if he lost the 2012 White House election to Obama over an internet meme. His legendary gaffe, “binders full of women” (google it, it’s hilarious) in the second presidential debate led to the most quotable and humorous political meme on social media, parody accounts on Twitter, pages on Facebook and Tumblr, and even commemorative works of art. It is still referenced in popular culture when any mention of women’s rights is made with a touch of irony. Those four words alienated Romney’s women voters and demonstrated the power of social media in what is now considered a watershed election.

We in India like to think of the current election as a ‘critical turning point’ in Indian electoral history, with the coming of age of social media here as well. We have not shied away from creating memes of our own, some clever and some rather obvious. The tremors started in April 2013, when the #Pappu versus #Feku battle began in the wake of Rahul Gandhi’s CII speech followed by Narendra Modi’s Ficci speech, leading to India’s first popular political memes and setting the tone for this election season. Over the past couple of months, the BJP’s heavily advertised slogan ‘Ab Ki Baar Modi Sarkaar’ has spawned so many jokes and parodies that they could be kept in circulation for the next five years.

That social media has played a role in reaching out, engaging and mobilising opinion this election has been obvious all along. Will this great online mobilisation yield electoral dividends? That is best left to post-election analysis. Until then, we do have social media to thank for throwing up new news stories, incubating headlines, and in some cases altering perceptions and popular discourse.

So, what were the big buzzy made- for-social-media moments of this election? Not surprisingly, most of them originate from the party with the most active social media presence: BJP. Narendra Modi’s selfie after casting his vote was the biggest trending item on Twitter that day; it made international headlines and drew comparisons with Danish Prime Minister Helle Thorning- Schmidt’s selfie with Barack Obama and David Cameron at a memorial for Nelson Mandela, where they overlooked the solemnity of the occasion to pose with cheesy grins. Modi’s selfie moment, the smile less cheesy and more self-satisfied, with the lotus firmly displayed in the foreground, soon turned sour when an FIR was lodged against him for flouting the election code. Modi’s love for the self- ie is self evident, his earlier selfies with Chetan Bhagat and Poonam Mahajan having already been widely circulated on social media.

Around the same time that Modi’s selfie was making news, Congress leader Digvijaya Singh was trending on social media after his pictures with news anchor Amrita Rai were leaked. He admitted the relationship on Twitter: ‘I have no hesitation in accepting my relationship with Amrita Rai. She and her husband have already filed a mutual consent divorce case… Once that is decided we would formalise it.’ For good measure, in the face of snide remarks all around, he added that he was ‘not [a] coward like Narendra Modi’. Online trolls still had a field day turning moral police on the man who has always enjoyed playing it himself.

The story exemplifies perfectly the kind of hype social media likes to feed on—what Mahima Kaul, an analyst of internet governance and a fellow at the Observer Research Foundation, describes as ‘low hanging fruit’. “The bigger story in this whole affair was that someone’s computer was hacked and cyber laws were violated. The woman in question filed a case and the police asked websites to remove the pictures. However, on social media, that was not relevant,” she says. “All the stories that have erupted on social media are not necessarily significant stories… it’s a case of low hanging fruit, the stories that are the easiest to follow. But once they are on social media, they are taken up in mainstream media and end up further polarising an already polarised election.”

The one story on social media that political pundits take seriously for its political implications is Rajnath Singh’s Twitter U-turn on the BJP slogan. Just after putting himself and his party at the online campaign’s forefront by asking for a ‘BJP Sarkaar’, the party president had to go in for damage-control by reverting to ‘Modi Sarkaar’. What many had interpreted as a course-correction—a shift away from its personality cult—lasted all of 33 minutes, after which Singh’s tweet was dismissed as an error by the party. “What may seem like one small incident was a revelatory moment. It exposed the faultlines between the celebrity cult and the organisational apparatus within the party. The fact that his message had to be changed is very significant,” says social commentator Santosh Desai.

The tenor of this election has been described as acrimonious, vengeful and distasteful. A look-back at all the controversies that have surfaced online raises a question: has social media given India its rudest election of all time? Social media has set the terms for debate, and, as is the wont of the medium, the debate has been dominated by extreme and fringe opinions. Just the other day, Subramanian Swamy accused Medha Patkar of being a Maoist on Facebook: ‘Meet the Maoist Prima Donna – Medha Patekar. The list of her anti-indian activities is long… She demanded mercy for these terrorists [Afzal Guru and Ajmal Kasab] on grounds of Human Rights’. Medha Patkar retaliated by accusing him of toeing the line of fundamentalists.

Even though small in numbers and limited in reach, social media activists act as a pressure group on politicians, as anonymous pairs of eyes and ears that won’t let them get away with an ill- judged remark or faux pas. Everyone on social media is forever addressing nameless and faceless groups of people. In the thick of electoral rhetoric, much gets said that would otherwise not. So much so that ally can turn against ally, as Omar Abdullah recently did on Twitter. The Congress’ decision to probe Snoopgate by setting up a judicial commission was met with disfavour not just by the NCP, but also the National Conference, with Abdullah taking to Twitter to express himself. ‘Was talking to my dad last night and he felt the same way — setting up a commission of inquiry in the dying hours of UPA 2 is just wrong,’ tweeted the CM of Jammu & Kashmir. In trying to disassociate himself from a controversy, Abdullah ended up stirring a new one.

It was this same sort of pressure that compelled Sushma Swaraj to voice her dissent against the re-induction of BS Sriramulu, implicated in Karnataka’s mining controversy for his close association with Janardhan Reddy. Swaraj tweeted, ‘I want to make it absolutely clear that B. Sriramulu has been admitted in the party despite my stiff opposition’.

Over the past few months, Swaraj’s isolation within her party has played out glaringly on social media. Her spat with BJP spokesperson Nirmala Sitharaman over Telangana just before polling began was quickly hushed up, but it exposed fractures in the party’s top leadership. Sitharaman had fired the first salvo when she tweeted in February: ‘If only Sushma had stood for Seemandhra in Lok Sabha just like Venkaiah [Naidu] and [Arun] Jaitley did today’. Swaraj fired back: ‘With Spokespersons like @nsitharaman, [you] don’t need enemies’.

Clearly, social media has changed the rules of the political sparring game. “It has become an arena for political leaders to vent and respond to everything,” observes Desai, “It’s almost like a parallel muttering under the breath, except it’s the most public form of doing so.”

The multiple conversations that social media encourages make room for responses to just about everything. Take, for example, Arun Jaitley’s blogged response to Priyanka Gandhi’s barb on Smriti Irani: ‘Mrs. Vadra’s statement yesterday on Smriti Irani, denying her existence by asking a question ‘who’, displays arrogance at its worst’. The under-the-breath muttering that Desai speaks of is best illustrated by what’s brewing in the Aam Aadmi Party. The party is credited with using social media to engage, crowdsource and gain itself a following large enough to become an overnight political force in India. Now, however, signs of dissonance within the party are visible to all on social media. AAP’s Amethi candidate Kumar Vishwas, who rather revels in controversy, has been busy on Twitter. He ranted against the party’s recruitment of new cadre. His tweet, ‘Agar chadhti nadi mein naale girenge to asthavan snan se bhi darega, achman to bhool hi jao’ (If all kinds of garbage falls into a surging river, devotees will be scared to take a dip, let alone drink that water) was read as a dig at sting journalist Ashish Khetan being given a ticket to run from New Delhi. Another prominent AAP leader, Shazia Ilmi, made use of Twitter to have her way with which constituency she would contest. When her party was trying to pit her directly against Sonia Gandhi, she promptly tweeted her dissent: ‘I am not contesting from Rae Bareli. I never agreed to, nor do I now. I have been denying this for the last two months.’ It was an e-volley fired by someone who understands the influence of the medium.