‘Too Terrible a Judgment’

The trial court may have dismissed his plea to make Home Minister P Chidambaram a co-accused with A Raja, but the ever-controversial Subramanian Swamy, the man whose plea led the Supreme Court to cancel 122 2G licences, tells Mihir Srivastava that he is by no means done with the case 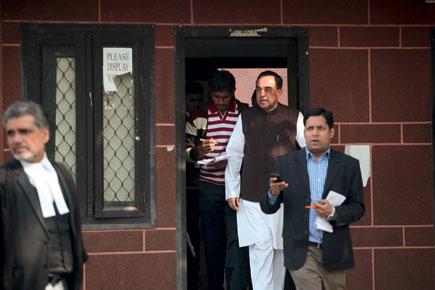 Subramanian Swamy, the man whose plea led the Supreme Court to cancel 122 2G licences, tells Open that he is by no means done with the 2G case


Q The Central Bureau of Investigation (CBI) and now the lower court say that there is no case against P Chidambaram in the 2G spectrum scam. What do you see that you think they can’t?

A Well, as far as the CBI is concerned, whatever they say on Chidambaram is suspect. The career and future of their cadre depend on the Home Ministry, even though they are technically under the Department of Personnel and Training. So I won’t care for that.

That is why I went to the Supreme Court to say that they have not looked at all the documents. Consequently, they should be asked to investigate. The court felt that since the matter is in an advanced stage at the trial court there, the question [of whether] there should be a CBI enquiry or not should now be decided by the trial court. So I had gone to the trial court to [have] Mr Chidambaram be made a co-accused. I looked at the charges being framed against Raja, and found that in none of the two major charges was he solely responsible for executing the order. In both these cases, Mr Chidambaram’s signature is there. Mr Chidambaram acknowledged to the Prime Minister that he was deciding these matters with Raja. All this is there. Now the court has accepted this view of mine. Yes, Mr Chidambaram and Raja decided this together. Now what [the judge] says is wrong as per law is that while this may be true, it still does not prove he did this with criminal intent.

In my opinion, that, at the very least, is a matter for investigation. I have shown that if Raja committed the offence, Mr Chidambaram abetted it. And therefore whether he is criminally liable or not should be determined either by investigation or proceedings in the trial court. Therefore, the judge got it wrong. I am surprised [by] this disregard of procedures.

Q What is your next course of action? Why do you think that higher courts will act any differently?

Q The time-bound prosecution of corrupt officers, as now ordered by the Supreme Court, is going to improve India’s tardy effort against the corrupt. That was one demand of the Jan Lokpal bill. What changes will this judgment usher in?

A First of all, let me say that the Jan Lokpal bill may have said that this is what should happen, but it is I who used current laws to bring about the necessary change. Whereas these people say that ‘Unless the Jan Lokpal bill comes, nothing else can happen’, I have adjusted [to] the present laws and tried to work through that, and I have achieved results already.

I have mathematically shown in one of my books that even if the probability of being caught is low, if the penalty on being caught and quickly [punished] is high, or the consequences are very harsh, every rational person would himself feel that corruption is not worth its cost.

Q You have taken judicial recourse against corruption. Prashant Bhushan, a core member of Team Anna, is helping you in these matters. Why have you not come out in open support or been part of Anna Hazare’s movement?

A Well, in court we have a very cordial relationship. I also knew his father, who was the Janata Party Government’s law minister [in the late 70s]. There is no doubt [that] ideologically, we are poles apart. The kinds of issues he takes up on behalf of the Centre for Public Interest Litigation [differ] the petitioners are very eminent people, including former chief election commissioners, former defence secretaries. He is essentially a lawyer engaged by them. He focuses the law on the question of catching businessmen, while I focus more on catching politicians. There is no clash between the two of us…

Q  Prashant and you are both described as people who take special pleasure in needling the Government. But the two of you represent different ideologies, if I may say so. Prashant has views on Kashmir that provoked a personal attack on him. Do you support his attackers?

A I know that. His views on Kashmir are poles apart from mine. I am of the view that we should not yield an inch.

Q Has that not caused a problem in working so closely with him?

A No. There will only be difficulty if we have to discuss these subjects. Only once did the subject come up for discussion, and I told him that ‘My mind is made up, so don’t waste your time.’

Q Black money is another issue that you have taken up. It is interesting that Anna and Baba Ramdev are talking about it. Ram Jethmalani has approached the apex court. And why forget the BJP? There are many parallel pressure groups. Is there no need for them to join hands to press the Government harder on this issue?

A Well, the difference between me and all of them has always been that I have tried to reduce it to action by going to court. They are raising [the issue of black money] and creating an ambience for [its extirpation]. I am grateful to them. But in the end, unless there is action, and some people are prosecuted, it will remain so much hot air.

Q Is this activism of yours born of patriotism or hatred of certain people in the polity?

A (Laughs) First of all, let me tell you, for the Supreme Court, it hardly matters. Because the Supreme Court has held that personal motives or political considerations don’t matter. What matters is the quality of material brought on record. People keep making these allegations. Today, they say I do not like Chidambaram, therefore I am prosecuting him. When I first prosecuted Raja, Karunanidhi said I am a Brahmin and he is a Dalit, [and] that is why I am prosecuting him. Then when it came to Kanimozhi, they said the same—basically that I am anti-women, I am against Sonia Gandhi, I am against Jayalalitha.

Q So, from anti-Dalit, you suddenly became anti-women?

A (Laughs) Now I don’t know what they can say for Chidambaram, except that maybe I am anti-intellectual or something (laughs again). The question of ascribing motives is an absurd thing. The question is whether I am successfully prosecuting matters or not. And if I am, that means courts have accepted that I have material. So that’s what matters. It does not matter whether I like somebody or don’t.

Sometimes, it is reverse circular logic. Namely, I might not like somebody after finding out what kind of person he is. Suppose I found out that Chidambaram is a scoundrel, then there is no question of my liking him. I would think it’s my duty to prosecute scoundrels.

Q We know your views on the Gandhi family. Many don’t agree and call you a Santa Claus of unrealistic ideas…

Mrs [Indira] Gandhi was the first one to call me a Santa Claus. At that time, I had argued that India can achieve 10 per cent [economic] growth without taking foreign aid from the World Bank and IMF, and can [develop] a service sector to the point that it might become the engine of growth. This was in my book in 1971, which she read out on the floor of the House. But all that turned out to be true. And, as a minister [of commerce and law in the Chandra Shekhar Government of 1991], I implemented it.

Q Apparently, there is no saying goodbye to Subramanian Swamy. Where do you see yourself ten years hence?

A Well, I don’t look that far. It is very difficult for me to say what is impossible and what is possible for me to achieve. I would like, in the next ten years, to make India a great economic power. Make India have a clear-cut identity, which I describe as the ‘Hindustani’ identity. Namely, either you are Hindu or your ancestors are Hindus.

That is the concept. I want a Hindu renaissance in our country. This is the only unachieved objective of mine which I formulated in 1970 when I entered politics.