They are Hardworking and Hateworthy

The thing about hate—it’s about love, actually. It’s an emotion of denial. A defence mechanism. Hating a thing has much to do with coveting something about it. 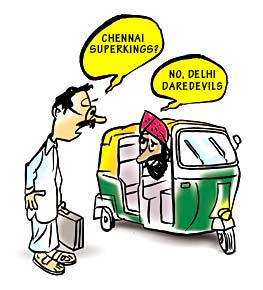 The thing about hate—it’s about love, actually. It’s an emotion of denial. Hating a thing has much to do with coveting something about it.


I happen to belong to the lot that considers itself fortunate enough not to live in either Bombay or Delhi and, for good measure, hates them for it for a host of very practised reasons, which I shall gleefully get into at once. For it’s opportunities like this that make my day. And considering how very British we Indians, like it or not, are, the weather is not a bad place to start this tirade. So let’s.

For one, the people who live in the two cities lined up for a well-deserved tongue-lashing have to submit themselves to the distress of adjusting and re-adjusting their minds and bodies to multiple seasons every year, while all lucky Chennai-ites, like yours truly, have to do is get used to experiencing the dependable joys of hot, hotter and hottest. How despicable I find being expected to kowtow to the fickle ways of the Bombay and Delhi weather, I can’t tell you. Instead, I’ll share with you my pet peeve about either of the two cities: public transportation.

I utterly abhor the temerity of auto drivers from Bombay who, without exception, consider me unworthy of charging whatever grabs their fancy. What’s worse, they choose to take the high ground by being scrupulously honest about the whole business of taking me for a ride. Imagine only listening to the diktats of that decorative object called the ‘meter’. Whatever happened to good old things like indecency and respecting what the customer can be ripped off for. It’s what I’ve come to expect and grown comfortably used to in Chennai. Why shock me senseless with your conscientious ways? Not only does it make me feel indebted, it gives me one thing less to complain about. As a healthy, carping human being, I don’t like that. Not one bit.

I live to complain. And absolutely adore cities that give me more reasons to.

So don’t get me started on Delhi. It’s almost as bad as Bombay when it comes to being good. Well, fine, now that you have brought it up.

New Delhi, they say, is the capital of the country. I say, it’s an eminently loathsome one. Seriously, there’s so much that’s right about it. For starters, what’s so great about offering an efficient and clean Metro Rail service when one can be pampered by the timeless pleasures of waiting for one to materialise and, in the meantime, making do with a service that’s considered frequent only by people who haven’t seen much better. Efficiency, I tell you—so over-rated and so unnecessary. I mean, if one really wants to be professional about everything, one may as well move to boorish Australia. (More on that later.)

On the other hand, why not be more like that great city I’ve so grown to love: Bangalore.

Ah, love. Such a complicated emotion. It totally explains why I feel so much of it for my ‘city cousin’ from South India.

Speaking of love, the thing about it, it’s easy to dish out in copious quantities when the recipient is a less fortunate soul, or city, worthy of pity. Which Bangalore, in my view, most certainly is. The former ‘Garden city’. The former ‘air-conditioned city’. The former ‘Retirees paradise’. The city that was formerly a joy to live in. How I hated it, the city, when my father chose not to invest in an apartment in Bangalore and put his money on, or in, Chennai.

Now, though, I love Bangalore for the urban sprawl it has become. And a logjam some people lovingly refer to as ‘Jamgalore’. (Perhaps they’re alluding to the far-sighted nickname one of their favourite sons, Rahul ‘Jammy’ Dravid, was saddled with after doing a series of cringe-worthy commercials for a company that for unmentionable reasons shall remain so.)

The more one sees ‘Jamgalore’ grow away from the ideal, the more one grows to love it. As long as one doesn’t have to live in it. And if one does, all the more reason to hate Bombay and Delhi. As a ‘Jamgalorean’, one has no choice but to appreciate the fact that nothing moves in the city. That the roads, too, are thankfully non-existent. Why bother with such necessities when you know they’re only going to end up potholed and choc-a-bloc with more cars. Besides, broad tree-lined avenues are so hard to maintain without a working municipality. Much more fun going nowhere on arterial pathways that have been reduced to rubble. Much more time on one’s hands in the air-conditioned confines of one’s car. (A twenty-first century version of the ‘air conditioned city’ it has become. Now that’s what you call development.)

Mobility and public utilities, I tell you—so over-rated. Bangalore, I tell you, it’s got absolutely nothing anybody need feel remotely envious of. I love the city. So unlike efficient, hardworking, hateworthy Bombay and Delhi.

Ah, hate. Such a convenient emotion.

The thing about hate—it’s about love, actually. It’s an emotion of denial. A defence mechanism. Hating a thing has much to do with coveting something about it.
Given the right circumstances, you wouldn’t think twice about falling in love with it if it were somehow possible to own. To hate is not to dislike. Dislike is tame. Hate is visceral. If it’s carefully thought out, it’s a lot of other things. But not quite hate.

As someone living in Chennai, I am infuriated by the fact that I can’t step into an auto without having to the endure the ignominy of thrashing out a deal I am bound to lose. It leaves me incensed that I’ve got to accept being at the mercy of a guy who’s providing me a service I’m paying money for. I’m being gypped. I know it. I can’t do squat about it. And it enrages me that some people, only because they’re fortunate enough to live in another city, can. Better then, to hate what I want, but cannot, for a number of pressing reasons, have.

I hate it that the women from Delhi are more beautiful. That the best hill-stations in the world are just a hop, skip and drive away from there.

I hate it that the agenda for this country is set in Delhi and Bombay.

I hate it that the roadside food in Bombay and Delhi is so much better than it is in my city.

I hate it that the people in both these cities are less afraid to take risks.

I hate it that I don’t own a piece of real estate in either of these cities. I hate it that they have the confidence, and audacity, to be loud, raucous and thrilling in their ways. I hate it that Bombay and Delhi together constitute ways of life I’d love to call my own. Most of all, I hate that I’m no longer a Bombayite. Scratch the surface and you’ll find few people really hate Delhi, Bombay or the people from these great cities.

What they are is jealous. And that’s what they hate. Happily, it’s okay to feel this way. I call it the ‘Australia syndrome’.

The ‘Australia syndrome’ is what Indians were suffering from (and to an extent still are) until cricket’s ‘Invincibles’ descended to a level closer to that of mere mortals.

Meaning what? Meaning this. So long as Australia were well-nigh unbeatable at cricket, it was eminently more comforting to hate them. God knows, it was quite painful, at least for sorts like yours truly, to celebrate someone who had just finished mashing you to a pulp. Beatings apart, what’s not to hate about a country that’s so beautiful, so sunny, so clean, so spacious, so prosperous, so efficient, so livable (mostly) and, worst of all, possesses a cricket team so goddamn hard-to-beat? Naturally, the only option one had, since one couldn’t surpass them at anything important, was to hate them. Call them self-centered. Arrogant. Uncouth. Loud. And the like. Echoes how the rest of India feels about Bombay and Delhi, doesn’t it? Case closed