Assam, West Bengal, Kerala and UP have seen a significant rise in Muslim population over the past decade, according to a leaked report of the 2011 Census 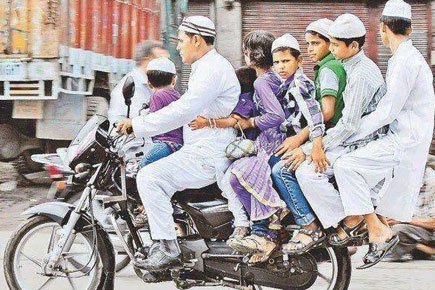 Assam, West Bengal, Kerala and UP have seen a significant rise in Muslim population over the past decade, according to a leaked report of the 2011 Census

When BJP President Rajnath Singh held out an olive branch to Muslim voters at a minority meet in UP recently, his comments evoked scepticism, rekindled the issue of Gujarat’s 2002 riots, and also turned the spotlight back on the Muslim ballot and how it could make or break the Congress at this year’s hustings. The dynamics of minority politics in India, especially how Muslim voters view India’s two big parties, would be a crucial factor in the polls. The key question is whether such voters still see the Congress as the party best placed to thwart the BJP and Modi. Or whether they are looking for viable options among other parties.

This is all the more relevant since the Muslim electorate, going by leaked 2011 Census figures that have been kept under wraps by the Centre, has registered a substantial increase since 2001—especially in 10 big states.

By the 2001 Census, Muslims formed 13.4 per cent of India’s population, spread across the country in a way that most lived in constituencies where they did not even account for 10 per cent of the local electorate. Also, data gathered by the Centre for the Study of Developing Societies showed that Muslim voter turnout averaged 59 per cent, a little less than the national average of 60 per cent. New Census findings, however, suggest a large number of constituencies where Muslims now form 10-30 per cent of the population. It’s here that the BJP hopes to nudge minority votes towards smaller parties and dispel the notion of the Congress being Modi’s ablest challenger. 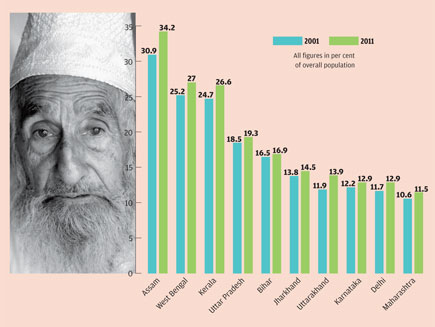 The rise in Muslim numbers is most noticeable in Assam, where they were found to make up 34.2 per cent of the population in 2011, up by more than 3 per cent since 2001. In West Bengal, this religious group’s share rose by almost 2 per cent to 27 per cent. In Kerala, by 2 per cent to 26.6 per cent. Uttarakhand has seen a similar rise to 13.9 per cent. In UP and Bihar, the increase is about 1 per cent, with the Muslim headcount at 19.3 and 16.9 per cent respectively. Jharkhand, Delhi and Maharashtra report similar increases, with the 2011 figures rising to 14.5, 12.9 and 11.5 per cent respectively, while Karnataka has seen a rise of just below 1 per cent to 12.9 per cent.

In the scramble for seats in the Hindi heartland of UP and Bihar, several parties will be vying frantically for the Muslim vote, which is bulky enough now to determine outcomes in many places. In 13 constituencies where Muslims account for over 30 per cent of the electorate, this high concentration has resulted in high minority turnouts and set off a trend of polarised politics. In 14 seats, they account for 20-30 per cent of the electorate, while in another 27, they can influence results in a big way. In 17 others where they comprise 15-20 per cent of all voters, they can act as tone-setters for poll outcomes.

In Bihar, with the ‘secular’ camp divided between the RJD-Congress and the JD- U, the BJP must be hoping for a splintering of Muslim votes. Nitish Kumar, who snapped his ties with the BJP over Modi, perhaps expects a ‘thank you’ note from minorities in the form of votes. In recent years, Bihar’s CM has been aggressively wooing ‘lower caste’ Pasmanda Muslims, a vast group of people seen to nurse a grudge over being overlooked by other ‘secular’ parties. Notes Oxford University Professor Faisal Devji: “For me, the most interesting political movement among Bihari Muslims is the Pasmanda Muslim Mahaz, which, while it may not be in a position to decide voting patterns, represents the most creative and radical politics among Muslims… for theirs is an internal critique, not the usual call for a bandwagon that all Muslims must join for security, etcetera. Pasmandas want to destroy the myth of a ‘Muslim community’, which they claim has always been dominated by exploitative upper- castes and not done any good to ordinary Muslims. It represents a new move towards a more confident politics not based on victimhood and paranoia, and for which the ‘community’ itself poses a problem.”

In UP, the ruling SP’s archrival BSP is perceived as better placed to gain this year’s minority vote by putting together a Dalit-Muslim electoral combo to challenge the BJP. In Western UP, though, the BSP may alienate Jatav Dalits whose relations with Muslims have soured over the Muzzafarnagar riots. That the Muslim vote cannot be taken for granted by any party—something that the Congress appears slow to comprehend— was proved tellingly in 2007, when the community backed the BSP. But in the 2009 Lok Sabha polls, Muslims divided their allegiance tactically among the Congress, SP and BSP in different constituencies, picking a party that could defeat the BJP, which came in fourth overall. This time, Modi’s party is determined to put an end to such tactical anti-BJP voting, which explains some of its recent friendly overtures to minorities.

The BJP’s efforts have already helped it gain allies. Most tellingly, in Bihar, the LJP’s Ram Vilas Paswan, once a strident critic of the BJP’s ‘communal card’, has rejoined the NDA and even lent some credence to Modi’s version of secularism: ‘nation first’. That is an impression the BJP now hopes to reinforce.