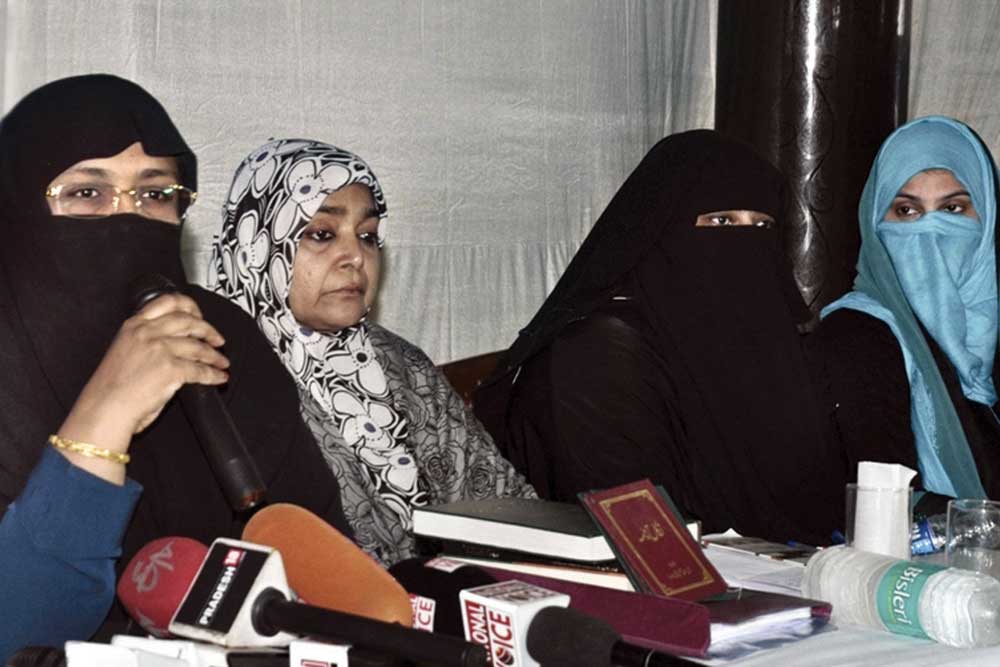 ISLAMIC CLERICS across India are starting a mass movement to oppose the demand of Muslim women to outlaw triple talaq, the practice of instant unilateral divorce by Muslim husbands. On 1 June, it emerged that the Bharatiya Muslim Mahila Andolan (BMMA) had collected more than 50,000 signatures in support of its campaign to have it banned. In a letter to the National Commission for Women Chairperson Lalitha Kumaramangalam, the BMMA said that it was writing to women’s commissions in different states of India for their support to abolish practices such as triple talaq and halala, which requires a divorced Muslim woman to marry another man, consummate that marriage and obtain a divorce in order to re-marry the man who divorced her. The BMMA’s campaign has drawn wide coverage in Indian media, causing alarm among orthodox clerics.

In Aurangabad, Maharashtra, the Jamiat Ulema-e-Hind (‘Assembly of Indian Islamic scholars’) has declared its intention to oppose any reform of the Muslim Personal Law. According to a report in the Mumbai-based Urdu Times of 8 June, Hafiz Muhammad Nadeem Siddiqi, president of the JUH for Maharashtra, declared, “The country’s circumstances today are dangerous. The Muslim Personal Law is the target [of enemies]. Paths are being paved for a civil code by opposing the Islamic law through so-called [Muslim] women…” Siddiqi was addressing a meeting in Aurangabad.

On 4 June, the All India Muslim Personal Law Board (AIMPLB), a network of obscurantism-minded Islamic clerics, put forward its women activists to defend the practice of triple talaq. Asma Zahra, a member of the Board, declared that demands for abolishing it were “Satanic activities”. According to the Lucknow- based Urdu daily Roznama Sahafat of 5 June, Zahra, who addressed a meeting of women activists from the AIMPLB as well as a press conference in Lucknow, stated, “In this country, the Muslim population is 20 crore, of which 10 crore are Muslim women. Of them, 99 per cent do not want even a minor alteration in Islamic Shariah.”

Zahra said that surveys arguing for an end to triple talaq were driven by anti- Islam conspiracies. “We are well aware of the conspiracies behind [these surveys],” she said, “Muslim women are aware that the Muslim Personal Law is [based on] laws made by the Qur’an and Hadiths [traditions of Prophet Muhammad] in which no change can be acceptable to a true Muslim.” Not only that. She cited Verse 230 of the Qur’an’s ‘Al-Baqra’ chapter in justification of triple talaq and halala. The verse says: ‘And if he has divorced her [for the third time], then she is not lawful to him afterward until [after] she marries a husband other than him. And if the latter husband divorces her (or dies), there is no blame upon the woman and her former husband for returning to each other…’

On 1 June in New Delhi, Amirun Nisa, a Chennai-based member of the AIMPLB, spoke out against demands to quash triple talaq, accusing “communal forces” of creating an impression that the divorce rate is higher among Muslims. According to the Patna-based Urdu newspaper Roznama Sangam of 2 June, she said, “The media is controlled by the majority [Hindus]. Every attempt is made by print and electronic media to defame Muslim Personal Law and damage Islam’s image by presenting the issue of divorce out of context.” She added that such Muslims are being presented to speak against triple talaq “who have no understanding of Islamic Shariah and have enmity against Muslim Personal Law”. Contending that attempts are being made to implement a uniform civil code in the country, she added, “Muslim scholars, ulema and intellectuals are not being allowed to express their views on TV channels.”

According to the Kanpur-based Urdu daily Anwar-e-Qaum of 7 June, Maulana Usman Baig, president of the All India Imams Council, declared that women who are demanding the abolition of triple talaq are not Muslims. Baig stated, “Today, the women—whether they are 50,000 or one lakh—who are raising their voice against Islamic laws and principles do not have any connection with Islam. Those who do not like Islamic laws have other doors open to them.” He accused such women of working for the Rashtriya Swayamsevak Sangh (RSS) and its associated organisations like the Muslim Mahila Sangh. The cleric said, “For the past few days, fascistic organisations have readied themselves to oppose Islam and they are attacking Islam from all four sides.”

In Patna, Maulana Muhammad Wali Rahmani, chief of the Imarat-e-Shariah, accused the RSS of creating a misunderstanding among Muslims by using some Muslim women. Rahmani, who is also general secretary of the AIMPLB, said, “The RSS is engaged in propagating misunderstandings among Muslims. Earlier too, its wing Muslim Rashtriya Manch had given an indication to mislead Muslim women. Under this conspiracy, some Muslim sisters are being used against Islamic Shariah.” According to a report in the Patna-based Roznama Sangam of 5 June, Rahman added, “Our religion is different from other religions. Our Shariah is eternal and no change in it will ever be tolerated.”

In India, Muslim Personal Law refers to mainly three legislations, all of which allow Shariah practices: the Muslim Personal Law Act of 1937, the Dissolution of Muslim Marriages Act of 1939, and the Muslim Women (Protection of Rights on Divorce) Act of 1986. The 1937 legislation allows Muslims to marry and divorce in ways deemed correct by Islamic clerics. However, since only a husband could ‘give’ his wife a divorce informally under this law, the 1939 legislation was enacted to permit Muslim women to ‘seek’—though not give—divorce through a court or informally with the involvement of Islamic clerics. As for the 1986 legislation, it quashed a Supreme Court order granting alimony to divorced Muslim woman Shah Bano, ensuring that as per Shariah, women cannot get alimony beyond three menstrual cycles.

Of all issues connected with Muslim Personal Law, the practice of triple talaq has attracted the most media attention. Since it’s like an ambush attack by a Muslim husband, humanist groups have been advocating its abolition. As per the 1937 law, there are two paths open to a Muslim husband who wants to end a marriage: one, by issuing a triple talaq in one instance; two, by issuing three ‘talaq’ notices in monthly instalments. In fear of the wife filing a 498A dowry harassment case, a Muslim husband typically opts against the latter path. However, triple talaq is an equally humiliating experience for the husband, who is effectively prevented by the 1937 law from seeking a court divorce. Muslim women’s groups are not demanding a change in the Muslim Personal Law. They are asking for a pragmatic codification of the Shariah so that the husband is subject to a process of divorce through the courts, which will be good for both women and men.