This water tank was commissioned in 1911, but the Kolkata Municipal Corporation went ahead and celebrated its centenary this year. Here’s why they could not wait for two more years 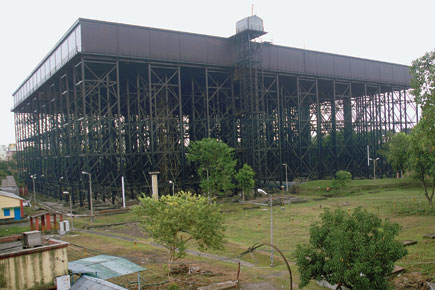 This water tank was commissioned in 1911, but Kolkata celebrated its centenary this year. Here’s why


As far as celebrating anniversaries go, this would be a unique one—a function to mark the centennial of a water tank! But then, the Tallah tank off Barrackpore Trunk Road in North Kolkata’s Shyambazar is also the only one of its kind. And, the celebrations came two years before the world’s largest overhead water reservoir turns 100. Kolkata’s Mayor Bikash Ranjan Bhattacharya and a host of prominent citizens were at hand at the tank’s ‘birthday bash’ organised by the Kolkata Municipal Corporation (KMC) on 26 November, extolling the engineering and metallurgical marvel that this landmark, but largely unsung, reservoir is. The square tank, at a height of 110 ft, can store nine million gallons of water and has been meeting the needs of half of this city’s populace every single day ever since it was commissioned in 1911. The then lieutenant governor of undivided Bengal province, Sir Edward Baker, laid its foundation on 18 November 1909. The tank has never been shut down and has sprung only 14 leaks all these decades. “This is really a marvel and speaks volumes about the metallurgical advances made even in those days. All the anti-corrosive steel plates and materials were shipped from England,” said Mayor Bikash Ranjan Bhattacharya. The giant tank was designed by British engineer WB Macob and constructed by Clayton Son & Co of Leeds, England. Records show it took Rs 5 lakh to build, an amount that today wouldn’t fetch even one of the steel girders the reservoir stands on. Filtered water to the tank comes from the Palta Water Works operated by the Kolkata Municipal Corporation (KMC) through underground pipes. This reservoir supplies water to millions of houses and establishments from Sinthi in North Kolkata to Bhowanipore in the city’s south.

But the KMC’s decision to celebrate 100 years of the reservoir in its 98th year itself has raised eyebrows. KMC authorities came up with the weak explanation that work on constructing the reservoir started in 1909, a hundred years ago, and that’s why the celebrations this year. But why couldn’t the civic body wait another couple of years to celebrate the centennial at the right time? The reason, like so much else in Bengal, lies in politics: the KMC polls are slated for mid-2010 and the mayor and the Left Front board that runs the affairs at the corporation feel they stand little chance of returning to power, given the string of reverses that the communists have suffered in Bengal over the past couple of years. Hence, the decision to bring forward the celebrations by two years. This has, expectedly, triggered criticism and scorn from the Congress and Trinamool, as well as local citizens and a host of bloggers who have mocked the mayor’s publicity-seeking tendencies. “Bhattacharya knows he won’t be the mayor in a few months’ time, that’s why he wants to lap up all the attention and publicity he can get in his last leg in office,” said former mayor and Congress leader Subrata Mukherjee. ‘Desperate mayor twists history’ to ‘Communist mayor forces bash down British-era structure’s throat’ are some of the charitable comments that bloggers have left in cyber space. Trinamool legislator Partha Chatterjee told Open that holding the 100th anniversary celebration two years before the actual date was a “cheap attempt” by the mayor to deny the Trinamool a chance (“We’ll surely win next year’s civic polls,” asserts Chatterjee) to celebrate the reservoir’s centennial in appropriate style in 2011.

But all the hype and the controversy over Tallah tank’s anniversary has buried a dire warning issued by Bhattacharya at the birthday bash. The underground pipes that bring water from Palta Water Works haven’t been repaired or replaced, are in a bad shape and can burst any day. If that happens, Tallah tank’s untarnished record of supplying water to millions of Kolkatans unfailingly every single day of its existence would be broken. Bhattacharya would be hoping that his warning doesn’t become a reality during his tenure; he’d only be too happy to see such a catastrophe occur once his successor assumes office.