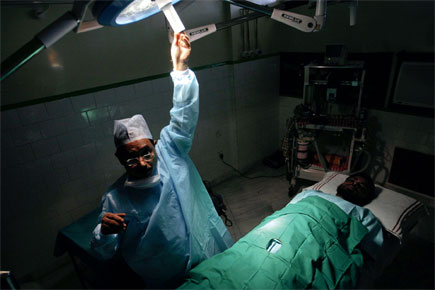 
Doctor Ilias Ali is a pious Muslim. But it is not for prayers that he visits different mosques, not only in his home town Guwahati, but in far-flung areas across Assam. Dr Ali is a sterilisation jihadi. Trained in a special vasectomy technique known as ‘No Scalpel Vasectomy’ (NSV), Dr Ali visits mosques to persuade people of his community to keep their family small. Among Assam’s indigenous Muslims, whose birth rate is more or less the same as that of Hindus and other communities, it’s a message he need not convey. The problem, in his view, is with non-indigenous Muslims, mostly those who have come from East Pakistan (now Bangladesh). Their literacy levels are very low and they hold such superstitious beliefs as children being a blessing from Allah that man has no control over.

To encourage family planning, Dr Ali cites the Quran (Chapter 46, Verse 15): ‘Wa hamluhu wa fisaluhu salasuna sahran’ (There should be a gap of 30 months between a child’s birth and his/her weaning). Since lactation is understood to act as a natural contraceptive for a mother, this implies that there should be a gap of two-and-a-half years between two children.

Dr Ali, a surgeon, is currently a professor of surgery and Head of the Department of Emergency Medicine at Gauhati Medical College. He underwent NSV training in China under a Chinese surgeon, Dr Li Shunqiang, who invented this procedure in the mid 70s. But it was only in the mid 90s that this simple and hassle-free technique was introduced in India. In this medical procedure for men, the sperm-carrying tubes are blocked by a special instrument through a tiny insertion hole made in each scrotum. No stitches are needed. The best part about it is that it is reversible. It was under Dr Ali’s guidance that Assam’s first NSV camp was organised in 2008.

Dr Ali’s campaign has been fraught with danger. Sterilisation is a sensitive issue among Muslims, not just for religious reasons—it’s labelled by many as unIslamic—but also because of a legacy of the Emergency, when an enforcement of the procedure on the poor was seen by an appalled minority as a denial of their fundamental reproductive rights.

In 2009, Muslim clerics issued a fatwa against Dr Ali, an ‘opinion’ that can hold considerable weight for believers. His meetings were boycotted and his family members were threatened. His friends and colleagues would fear for his life every time he undertook a long and lonely journey to reach an interior region of Assam to spread his message.

To counter the hostility, Dr Ali began appealing to religious leaders. He put forth examples of countries like Iran and Indonesia. In Iran, family planning was advocated by the Islamic revolutionary Ayatollah Khomeini himself. He made it clear in his speeches that Islam has nothing against limiting the size of one’s family. Dr Ali says that over 1993-2004, about 400,000 people underwent NSV in Iran. Today, its fertility rate is 1.88, compared to India’s 2.6. In Indonesia, another Muslim country, it is 2.2.

The doctor also dissuades Muslim men from multiple wives, a practice common among immigrants from East Bengal. To support this, Dr Ali cites the Quran again (Chapter 4, Al Nisaa): ‘Faa-in khiftum alla ta’-dilu fawahidatun’ (If you fear you will not be able to be equally just with them, then [marry] only one. And then, this: ‘Wa lun tasta teeoo un ta’dilue biinal nisaee walaw harastum’ (You are never able to be fair and just between women, even if it is your ardent desire). Dr Ali says countries like Turkey and Tunisia have banned polygamy, and that it is subject to administrative or judicial control in Egypt, Syria and Jordan.

After much effort, the doctor’s views are gaining acceptance among Assam’s Muslim masses, and he has even been invited to religious congregations on some occasions. Barring certain pockets, he says he faces no further resistance to his work now. Since 2008, he and his team have conducted about 36,000 NSVs in addition to 180,000 tubectomies.

Dr Ali, whose father was a cultivator, had a modest upbringing. Their village had no school. Every morning, he would walk to a neighbouring village to attend a primary school there, one that had no desk nor bench. It was after much hardship that he completed his MBBS degree. In 1987, he finally got his Master’s in General Surgery. He had married his wife Saira only a year earlier. They now have two children—a girl and a boy. In 2004, the couple started a hospital for the poor. His wife looks after its day-to-day functioning.

Today, Dr Ali’s work has transcended borders. He receives invitations from countries like Rwanda and the Philippines to promote NSV. But it is India that concerns Dr Ali most. “Even after so many years of independence, we are still fighting for basic amenities,” he says, “One major reason is the population explosion in our country… India cannot develop unless we become serious about controlling it. Look at China, it is progressing like anything.”