Subservient to his Gandhi family overlords, he was unfailingly loyal to his supporters and harsh on those who did not do his bidding 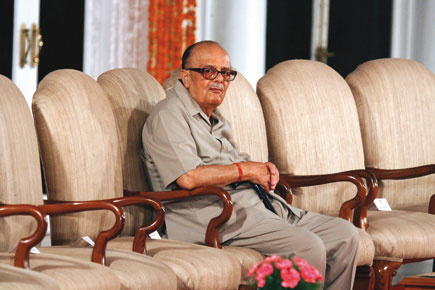 Subservient to his Gandhi family overlords, he was unfailingly loyal to his supporters and harsh on those who did not do his bidding


It is not clear if Arjun Singh ever did find out that he had been dropped from the Congress Working Committee. The announcement preceded his death by a few hours and he was in Intensive Care by that time. As one who lived his life as a Gandhi family loyalist, it is perhaps best to assume he died as one, satisfied that Sonia Gandhi had taken time off to visit him in hospital.

For journalists used to putting others under scrutiny, meeting Arjun Singh could be quite a contrast. Even before he began speaking, he would pull out a tape recorder and place it prominently in sight. He would then await the questions. The answers would be slow in coming. Unbothered by the silence that would hang in the air, he would choose to answer only once the reporter started wondering whether he had heard the question. These mannerisms ensured reports on Arjun Singh were marked by a precision that no other politician could command.

It was the winter of 2003 that I find myself accompanying him in an SUV lurching through the Churhat Assembly constituency of Madhya Pradesh. He was making a desperate bid to ensure his son retained the seat. As we travelled from village to village, ‘Dau saheb’, as they called him, stood before many of the same voters who had won him his first election almost four decades earlier. Addressing gatherings of no more than 10-15 people, he would begin by apologising for any mistakes his son may have made, and then remind them of his family’s links with the area. It was a very Indian appeal, a man who could have been the Raja of Churhat asking the populace for votes and forgiveness on his son’s behalf. It worked.

In that description of the man as the once possible Raja of Churhat lies the key to understanding Arjun Singh. In a way, he embodied a whole category of Indian politics, defined by Thakurs. Just to name Rajnath Singh, Bhairon Singh Shekhawat, Digvijay Singh and Arjun Singh is to summon a kind of politics that transcends political parties.

With Arjun Singh’s death, the mantle of political Thakurs is set to pass on to a new generation. Of course, Digvijay Singh continues to play a key role, but more to the point is the fact that the most prominent of young men who surround Rahul Gandhi are Thakurs themselves.

The court craft of Thakurs is what explains how Arjun Singh conducted his politics. Subservient to his overlords, in this case the Gandhi family, he was unfailingly loyal to his supporters and harsh on those who did not do his bidding. Those who saw him as a defender of secularism did not realise he practised an older Indian art. Like a good ruler, he did not discriminate among his subjects. For him, Muslims and Hindus were to be treated differently but equally. Yet, at the same time he went about appeasing deities. This manifested itself in his unquestioning belief in astrology and his guru, Mauni Baba (the silent old man) of Ujjain.

It was a statecraft that laid emphasis on the politics of tokenism. In the early 80s, in his first term as Chief Minister of Madhya Pradesh, he was not having an easy time of it. The powerful Shukla brothers could not countenance this upstart. This is when he set up the Mahajan Commission, long predating the Mandal Commission. Based on its recommendations, he announced reservations for OBCs in educational institutions.  Many believe that Arjun Singh never had any real intention of implementing the quota. But the announcement was enough for him to obtain political mileage. It was not a lesson he ever forgot.
This skill at manipulating events is what saw him through much that would have decimated other political careers. On 3 December 1984, Arjun Singh was Chief Minister of the state when the Union Carbide gas leak left thousands dead. Questions were asked about his closeness to its management. On 24 July 1985, the Rajiv-Longowal Accord was signed. Arjun Singh as Punjab Governor was one of the architects of this accord, which was flawed from the start. The unwinding of the accord led to a spiral of violence in Punjab. Even charges of diverting funds from the Churhat Lottery that surfaced in 1987 did not undermine him.

Given this history, it would be unwise to write off his political relevance even after death. The manuscript of his autobiography is ready for publication. A word on any of these subjects will be enough to trigger off another political controversy with Arjun Singh at the centre of it. Count on it.