Party president Nitin Gadkari has set up a new team to revive the BJP, but if the party needed a break from the past, this is certainly not it. 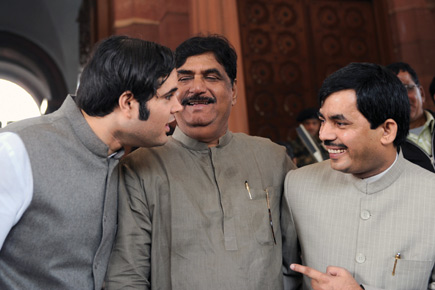 Nitin Gadkari has set up a new team to revive the BJP, but if the party needed a break from the past, this is certainly not it.


Syed Shahnawaz Hussain, former civil aviation minister and currently Lok Sabha MP from Bhagalpur, is often called the ‘Muslim posterboy’ of the Bharatiya Janata Party (BJP). On 16 March, the day party President Nitin Gadkari’s new team was to be announced, Hussain was preparing to play the party’s posterboy yet again. He arranged for boxes of special desi ghee sweets at his official MP’s residence—7 Pandit Pant Marg—and dressed himself in an immaculate white kurta pyjama. Hussain then wore a navy-blue Nehru jacket over it for the TV cameras. He has been a spokesperson in the past and knows how white kurtas can reflect light and wreak havoc on TV screens, turning your soundbite ‘NG’ (‘no good’), a TV production term casually used for shots that land in the recycle bin.

Chatting later with a bunch of TV journalists, Hussain joked about how he knew he was going to be on TV and dressed accordingly. When the BJP’s list came out in the afternoon, he found himself on TV alright, but not for becoming the party’s Muslim general secretary, but instead as a re-appointed spokesperson defending the party’s decision to drop him from the coveted list of general secretaries. It was a routine he was familiar with. “It is true that there are no Muslims in the list of general secretaries or in the Parliamentary Board, but that is because our party does not think along sectarian lines. Such decisions in the BJP are not taken on the basis of religion,” he said, adding, “I have always been grateful to the party for allowing me to contest Lok Sabha elections time and again, and I will continue to carry out the assignments given to me to the best of my abilities.” He knows pretty well that this is about all he can do; carry out orders as the RSS takes charge of the BJP again through Gadkari.

Sources within the BJP reveal that Hussain was on the general secretaries’ list that Gadkari had drawn up. But he was dropped once the party’s big brother, the Rashtriya Swayamsewak Sangh (RSS), stamped his name NG. “He is young, he is quick-witted, but he is a Muslim,” says another young party MP, and that was deemed a good enough reason to keep him out.

The BJP, it turns out, is the BJP.

A few hundred metres from Hussain’s house, on Jantar Mantar Road, lives another young MP of the party. There are neither sweets nor interviews for journalists coming in to meet former Prime Minister Indira Gandhi’s grandson Feroze Varun Gandhi after his appointment as a national secretary in Gadkari’s new team. Varun entered the party with mother Maneka with much fanfare in 2004, given the political dynasty he belonged to, but his rise within the BJP had begun to plateau even before it started. With Pramod Mahajan, the man who inducted him, dead, Varun remained a mere member of the party’s national executive. Twice, the party decided against giving him tickets to contest Lok Sabha bypolls. But then 2009 happened: a CD surfaced showing Gandhi make a fiery hate speech in March last year. The audio-visual clip had the young Lok Sabha aspirant threatening to chop off the hands of Muslims. While Varun Gandhi maintained that the CD was doctored, he was booked under criminal law and even jailed for a few days. The case is still on. Party leaders, from the then party President Rajnath Singh to the BJP’s prime ministerial candidate LK Advani, ‘disowned’ the hate speech, saying that the party did not subscribe to such hatred and Varun was on his own in this battle.

Yet, backed by the RSS, Varun did contest the election and enter the Lok Sabha. Now, Gadkari’s appointment of a man who the party refused to defend less than a year ago, has come on the insistence of the RSS that wants the BJP to pitch him directly against his cousin and Congress General Secretary Rahul Gandhi, at least in Uttar Pradesh. The BJP Chief Spokesperson Ravi Shankar Prasad, who announced the new list, including his own elevation to the post of general secretary, deflected questions on Gandhi’s inclusion in the list with, “He is an MP, let us forget the past.”

On another note, Prasad’s appointment has left former Union ministers Yashwant Sinha and Shatrughan Sinha unhappy. With assembly polls in the country next scheduled for Bihar, this could create hurdles for the party and possibly even the new party president. “There are two office bearers from Bihar in the team, and both are Kayasthas. This does not augur well for the party,” says a BJP politician from the state.

While Yashwant Sinha is said to have been left out of the list along with Arun Shourie for his tirade against Advani and his team being largely responsible for the BJP’s 2009 Lok Sabha debacle, the last-minute tweaks to the list—after Gadkari consulted both Advani and the RSS—indicate a balancing act by the BJP president to accommodate various factions and constituencies: those backed by the RSS or Advani; women and young politicians; backwards and minorities. Advani loyalists Ananth Kumar and Vasundhra Raje, who openly challenged previous party President Rajanth Singh, are on the list of general secretaries. In fact, Ananth Kumar retains his position as secretary of the all-powerful Parliamentary Board. Another hate speech specialist, Vinay Katiyar, is a vice-president.

To up the glamour quotient, actress Hema Malini is a vice-president, while entertainers Navjot Singh Sidhu and Smriti Irani have been made secretaries. The 121-member new National Executive Committee has one-third women. The 12-member Parliamentary Board has former party chiefs Atal Bihari Vajpayee, LK Advani, Murli Manohar Joshi, Venkaiah Naidu and Rajnath Singh, along with the RSS’s own men, general secretaries Ram Lal and Thawarchand Gehlot.

The RSS pointsman Bal Apte continues on the board, while other RSS appointees include Bhagat Singh Koshiyari as vice-president, Murlidhar Rao as secretary and Tarun Vijay, former editor of RSS mouthpiece Organiser, as a spokesperson for the party. V Satish and Saudan Singh (joint general secretaries, organisation), also close to the RSS, have been retained.

Between the bids to please RSS Chief Mohan Bhagwat and not upset Advani, Gadkari has drawn up a list that has also left some people in the saffron party red faced. While many in the BJP believe that projecting the octogenarian Advani as the prime ministerial candidate last year did the BJP in at the hustings, it was infighting that had led to the BJP’s electoral fortunes plunging from bad to worse. When the RSS stepped in to act as firefighter-in-command in August last year, there was unanimity on getting rid of the old guard. The new team makes it clear, though, that the BJP’s demons will be tougher to fight than it thinks. The party is still caught between pleasing Bhagwat and appeasing Advani, between quelling old rebellions and giving rise to new ones, and between rewarding a wayward Varun and denying a deserving Hussain his due.