A child custody battle naturally goes in favour of the mother. But is this always fair to the father? 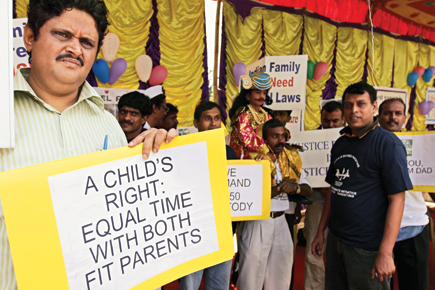 A child custody battle naturally goes in favour of the mother. But is this fair to the father?


Two fathers fighting for child custody rights got the thumbs up from the Supreme Court last week. On Friday, a mother had to withdraw a petition trying to thwart a father’s legal quest for more time with his daughter. The apex court had weighed in on his side, directing the divorced couple to settle it out of court.

On the same day, in another case, where a father has been estranged from his son for two years, the Supreme Court directed the Central Bureau of Investigation (CBI) to step in. The CBI has been given six weeks to find the mother who has gone absconding with her son. The apex court felt compelled to take this step since its repeated directions to state police departments on the matter had come to naught.

These two cases are quite extraordinary. For, the fathers involved have not allowed the frustration of repeated court visits to weaken their will. Instead, they have built up campaigns that have now found support beyond their home cities of Bangalore and Hyderabad.

One of them started an NGO, and the other a website.

In a society steeped in patriarchy, aggrieved fathers crying foul over the family law being unfair to them are unlikely to be taken too seriously. But that is a notion Kumar Jahgirdar, a Bangalore-based stock broker who has been locked in a decade-long legal battle for a bigger parenting role in his daughter’s life, has taken upon himself to challenge. He started the Children’s Rights Initiative for Shared Parenting, or Crisp, in January 2008.

In a little over a year, Crisp has got the support of some 1,000 people, including NRIs. Perhaps the only platform of its kind for single fathers, Crisp has become something of a support group for fathers fighting for the right to shared parenting of their own children.

One year after it started in Bangalore, Delhi is preparing to launch its own chapter. “Fathers must be more expressive and vocal about their need to be with their children. Today, mothers manage the office and the house. Fathers, too, are capable of multi-tasking. Sure, there is no substitute for the mother, but the father has his duties and responsibilities too,” says Jahgirdar.

Crisp talks of custody rights as child rights. For its efforts, it has even got a ‘best wishes’ letter from the National Commission for the Protection of Child Rights. Writes NCPCR chairperson Shantha Sinha, ‘I feel Crisp has taken a good initiative to educate the society, the legal fraternity and the government about the paramount importance of child welfare in a child custody case and the significance of the love and care of both the parents in the child’s upbringing.’

No doubt, children are very often caught between warring parents. “We want the courts to be sensitised to the special issue of children having access to both parents. Custody battles take a long time and so what Crisp is proposing is shared parenting from day one. Couples should be counselled on the ill effects of depriving children of the natural father or mother. Emotional maintenance of the child is of prime importance,” says Ekta Singh, a Crisp counsellor based in Delhi.

The sense of brotherhood that Crisp seems to have generated is quite extraordinary. All kinds of personal tragedies have come to light in this forum. The one that grabbed headlines last week is the story of Hyderabad-based scientist Ravi Chandran, who gave up his career in the US and for the last two years has been camping in India to find his son. He has even started a website to call attention to his predicament. “I raised my little boy for five years. I love him very much. Not seeing him gives me tremendous pain. I need to prevent myself from going into a destructive mode, like Syed Makhdoom did. I am going through the same trauma, but I want to be alive for Aditya,” says Chandran. Syed Makhdoom was a 40-year-old NRI who committed suicide at his Bangalore residence in April, unable to cope with the heartache of not being with his son, following his separation from his wife.

One might wonder if a lot of woman bashing goes on inside this forum. The choice of statistics on the website doesn’t exactly paint a flattering picture of single mothers. And, there is justified anger towards women who have abused loopholes in the law to keep their children away from the fathers. There is also a lot of frustration against a system that seems to be indifferent to their plight as fathers.

Kamal Vikram, a Delhi-based HR professional who hasn’t seen or been allowed to talk to his five-year-old son for three years now, says, “The courts are only interested in giving dates. They are not bothered about the estranged couple or about what is happening to the child.”

In that sense, the members that make up Crisp share their predicament with the hundreds of thousands of women who do the court rounds for years with little hope of justice.

For these men, Crisp is a kind of support network that, among other things, helps them come to terms with their loneliness. “A father who has watched his son or daughter grow up is sometimes allotted just one-hour weekly visitation rights by the court. Even that comes after much struggle. It is not enough. I suppose people are not used to seeing men taking out marches to demand such things as shared parenting. This is a step forward,” says Arun Kumar, a Delhi-based professional in the medical tourism industry who participated in a candle-light vigil held in New Delhi on the eve of Father’s Day to bring attention to the issue.

For many approaching Crisp for help, it is a first even talking about their personal stories. For some, the fellowship has become an anchor that has helped turn their life around. Others have gained a sense of purpose by becoming part of a campaign. For still others, it has become their only hope of a breakthrough in a long and bitter stand-off within a former family.

There are stories of hope where fathers who came for help are now counsellors to other fathers at the forum. KP Vishnukumar, a 31-year-old software professional, has managed to turn his life around in the last six months. He now counsels other single fathers. Fighting lawsuits, he says, takes a lot of mental and physical stamina. “You can’t win if you are not fit.”

In the few months since he has started counselling, Vishnukumar has managed to bring two families back together. “Maybe someone else will be successful in playing the role in my life that I am playing in the lives of others.”

There is also strength to be gained from the success of people like 38-year-old Nishant Kumar (name changed), a hotel maintenance engineer in Bangalore who had a recent breakthrough when the court granted him interim custody of his four-and-a-half-year-old daughter.

Some may view organisations like Crisp with a certain degree of scepticism. Against the weight of a reality where women are socially and culturally suppressed, these men fighting for shared parenting rights are at a disadvantage when they allege gender bias and call for changing the system and law.

What is, however, heartening and more likely to gain mass support is the beginning of a campaign by fathers to seek a greater role in the lives of their children.