The Mask of Publicity 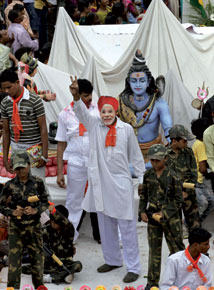 
The Mahabharata has a significant episode set towards the end of the Pandavas’ exile in the forest. One by one, all four brothers of Yudhishthira die by a lake. Too thirsty, they drink its water before answering the questions of the yaksha of the lake. Yudhishthira is wiser. Quelling his thirst, he answers all the questions of the yaksha (in reality his father, Yama, or dharmaraj) about the principles anchoring his universe—social, moral and metaphysical. Told he can save one life, he chooses his step-brother (whom he had staked first in the dice game) so that both his mother and step-mother would have one son alive. Satisfied by his sense of justice, Yama revives all four Pandavas. This episode is called the Yaksha Prashna, or Yaksha’s Questions.

Closer to our times, this profound story can be read as an allusion to the relationship between the political class and society as the bedrock of a functioning democracy. This relationship hinges on the willingness of politicians to face questions from society: Is their governance in sync with the dharma of constitutional democratic politics? Does it show a cognisance of principles such as Rule of Law, power-with-accountability and pluralism as a political expression of India’s vast diversity? Does it reveal a comprehension of democracy as the might of a majority, or as a negotiation of the interests of many?

In the face of uncoiling ‘whys’ and ‘hows’, most politicians in power use time-tested feints: spiels of obfuscation, opaque silences or raging offensives against opponents. The current government at the Centre, for one, seems to favour a surreal quietude. Whatever the feint, most politicians do not contest the centrality of the political domain that contours their existence, even if that space is fraught with probing questions.

One of the most noticeable exceptions to this convention seems to be Gujarat Chief Minister Narendra Modi. His way of neutralising yaksha prashna is that he has simply plucked the notion of power-with-accountability out of the political domain, and planted it in a personalised celebrity universe. Since a celebrity is his own sole reference, with armies of devoted fans, where is the question of imposing ‘external’ yardsticks like Rule of Law? What drives Modi is a narcissistic self-image of an ‘iron man’ who stands head and shoulders above everyone, his own party and colleagues included.

But Modi the iron man, who has the ability to lacerate anyone with his sharp tongue, is extremely thin-skinned when it comes to questions perceived as unfriendly or verging on ridicule. That is why until now, he has usually preferred the safe-house format of one-way communication, such as speeches without question-and-answer sessions. Simply put, how can an unquestioned leader be questioned, even in friendly settings such as Delhi’s Shri Ram College of Commerce? Even the interviews he gives are carefully calibrated to ensure soft landings; they, too, fall in the category of one-way communication.

This model of communication by a frenetic PR machinery underscores Modi’s concern about having absolute control over his image, and also shows his understanding of the power of projection. It is quite similar to present-day celebrity blogs where stars put out their ‘authoritative version’ in a bid to reach their fans directly. It helps them counter or bypass a critical media, and reinforces their hold over fans overwhelmed by this seemingly intimate bond. Modi’s carefully crafted soliloquies and website do just that. In particular, his website is his single-minded ode to himself for the mythology of power and omnipresence it creates around him, through the sheer multiplication of his image, his name, his views, his comments and the adjectives used to describe him. To feel larger than life and beyond any yaksha prashna appears to be a need stemming from his personality as well as the dictates of his ideological indoctrination.

In more than a decade of power, Modi has crafted various self-images as a meeting point between him and his fans in his alternate universe. In 2002, he won a state election as the ‘Hindu hriday samrat’, capitalising on communal demagoguery and gaurav yatras. In 2007, Modi became a manly father to all six crore Gujaratis (although, everybody knows parents love some children more than others). He also started using the word development; economist terms like ‘secular’ growth must have tickled him no end. Before his third state election in 2012, the Gujarat Chief Minister felt a great deal of religious ‘sadbhavna’, which together with development created an image of munificence for his fans. Receiving Muslim leaders showed him as reaching out; simultaneously, the involuntary recoil to avoid wearing a Muslim skullcap proclaimed him to be ideologically pure at heart.

And now, as the BJP sarathi for the 2014 General Election, Modi has amplified his views about being an Indian first and foremost. Decoded, it means little more than being a ‘nation of 80 per cent’: as LK Advani explained at various hinterland stops during his 1990 rath yatra, the BJP was only seeking 80 per cent unity in India (taking minorities out of the calculation). But fans and gullible fence-sitters go soft-eyed at such pronouncements.

Modi has even started carving his lips in the semblance of a smile, although it is difficult for iron men to indulge in such vacuous pursuits. Certain gestures are a constant: the raised arm pointing a finger skywards, as befitting a prophet perhaps? A perfect photo-op, this pose looks good in silhouettes too. Showing a muscular arm helps, especially when you want to tell your hardcore fans that apart from trying to stretch those darn facial muscles, you have also started pumping iron in your soul the way you did in 2002 to announce your star presence in ‘mera’ Gujarat. But since it is a question of ‘mera Bharat’ now, it is time for some performance enhancing invectives on the tongue in the same one-way format.

The communion between the star leader and his fan base is perfectly encapsulated in the saga of the man, the mask and the hologram. The state elections of the past decade were characterised by Modi masks. A mask requires a face to wear it; to that extent the mask is dependent on the wearer. But the wearer, too, feels freer to express views or perpetrate acts considered unacceptable, for what the world sees is the mask, not the face hidden behind it. The link between the leader and his fans gets cemented, and any attempt at a yaksha prashna is seen merely as an attempt to besmirch the leader, so complete is the identification.

Then, in the 2012 Gujarat elections, the low-tech mask was surpassed by the hologram. Modi’s image—and speech— was projected from the state capital on specially-erected screens in Ahmedabad, Vadodara, Rajkot and Surat through 3D holographic technology and satellite link-ups. There he was all by himself, the chosen one, buoyed by the power and aura of technology. The instances of the election mask and hologram epitomise desires and aspirations working at various levels. The leader’s ambitions are projected on to his supporters; equally, the leader seems to be an embodiment of their aspirations. Both come together in a grand design.

In his iconic work Ways of Seeing, writer and art critic John Berger explained how publicity remains ‘credible enough’ to wield the influence it does: ‘It remains credible because the truthfulness of publicity is judged, not by the real fulfillment of its promises, but by the relevance of its fantasies to those of the spectator-buyer.’

Berger had one more significant observation on publicity, that it ‘turns consumption into a substitute for democracy—the choice of what one eats (or wears or drives) takes the place of significant political choice. Publicity helps to mask and compensate for all that is undemocratic within society…’

The crux of the matter is this: on the one hand is a narrative of the celebrity leader and his adulatory core fan base rooting for an India that stands for the might of its majority. On the other hand, there are large sections of middle-class India today which nurse a sense of entitlement that is seemingly impervious to the interests of many other sections of society. The common thread in both narratives is an unwillingness to accommodate a range of concerns, or even to envision a society that has the courage to reflect on its own history and provide space for an entire spectrum of views and interests—some in affirmation, others in contradiction.

At stake is the recovery of the idea of India—and the spirit of yaksha prashna.