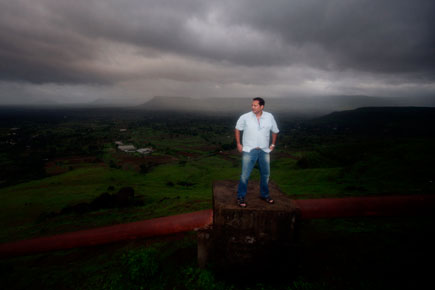 
He is reportedly an alcoholic and loves life in the fast lane. An opportunist, his politics is sans ideology. His drunkenness and public spats are recounted as amusing anecdotes across Satara, the constituency he represents as an MP of the Nationalist Congress Party (NCP). Udayanraje Bhosale is not an ordinary man. He is the 13th direct descendant of Chhatrapati Shivaji Maharaj, the legendary Maratha ruler of an empire in what’s now Maharashtra.

As Chhatrapati, Bhosale has numerous responsibilities, but none are honoured due to his increasing alcoholism. He has been inaccessible to his constituents for a larger part of his five-year tenure on account of his reported drunken bouts, but has a network of urban friends who stand in for him when needed. Those who have managed to meet him at his palace in Satara in western Maharashtra have amusing tales to narrate. His wealth isn’t great, sources say, and whatever there is may soon vanish given the manner in which it is being spent.

Recently, some photographs of Bhosale pointing a revolver in an inebriated state went viral. Acquitted of murder charges some years ago, many feel his title should be stripped away. Though there are murmurs that he must mend his ways, as he is directly affecting his ancestor’s image, no one has dared to voice this aloud. The fear of violence by the Shiv Sena or the Sambhaji Brigade, which are intolerant of any perceived disrespect to Chhatrapati Shivaji, has muted such concern.

Bhosale’s close friend Bhayyu Maharaj, a ‘spiritual’ guru to politicians in Maharashtra, has confessed that both of them live life in the fast lane. But not a single political party has raised the issue.

On the other hand, these parties have burnt books, vandalised property, and caused grievous harm to academics, writers and others who have dared to hold a contrary view on the Maratha king. They have warned bookstores against stocking the controversial book Shivaji: A Hindu King in Islamic India by James Laine, even though the Supreme Court lifted the ban on the book more than three years ago.

Interestingly, a passing reference to Bhosale’s love for the bottle was made by Shiv Sena MLA Ramdas Kadam just last week. As Minister for Home in the Shiv Sena-BJP-led state government between 1995 and 1999, Kadam had launched a crackdown on illegal liquor stores in Maharashtra. Last week at a public meeting, he said of Bhosale: “He should make the bottle his symbol.” After this, Kadam has avoided any reference to the issue. “Someone has to raise it,” is all he is willing to say.

As a result of his alcoholism, Bhosale has got himself into skirmishes and accidents, beaten people up, and needed spells of hospitalisation. “No one knows what his interests are. He has to be sober to hold a conversation,” says one of his ‘supporters’.

Bhosale has had an easy political life. He is neither a loyalist of any ideology nor a cardholding member of any political party. “He wants to stay relevant in the political scenario. [But] if the alcoholism continues, he will end up finding no takers for his candidature,” says a political analyst who does not wish to be identified.

More than his personal competence, it is his lineage that has helped him find relevance in the state’s politics. Every election, he has been with a different party. As a BJP minister in the earlier saffron-combine state government, Bhosale had found it difficult to stay awake during proceedings of the Maharashtra Legislature. His lacklustre performance as a minister saw him dropped from the state cabinet, which prompted him to send feelers to the Congress. Though he sought numerous appointments with Congress President Sonia Gandhi, she refused to meet him on the advice of the state Congress president. This angered Bhosale, and he sealed a deal with the NCP.

As an MP of the NCP, his political contribution to the party has been near zero, a senior NCP leader says. “He is a disgruntled party member. Within a few months of becoming an MP, he started looking [at] other parties. There has to be some contribution to the party. His alcoholism is a definite problem and it has caused much inconvenience,” says the leader.

Those in the know say that Bhosale and his relatives have always used their lineage to seek political mileage, but have constantly maintained a distance from any controversy surrounding their ancestor. Even at the height of the James Laine book controversy, he had nothing whatsoever to say. And though there was much anger against his silence, it was not openly expressed by the Shiv Sena and other protesting parties.

No one is allowed to have an audience with Bhosale without prior intimation. His growing inaccessibility to the common man in his constituency has evoked strong reactions and many do not want him re-nominated.

If the NCP drops him as its Lok Sabha candidate, it may signal the end of his political career. No other party is willing to take him on. Lineage, it seems, is not always enough.