The Last Days of the Telegram

They say even the Great Indian Uprising of 1857 failed because of the telegram. As technology gallops onward, a 150-year-old tradition bites the dust 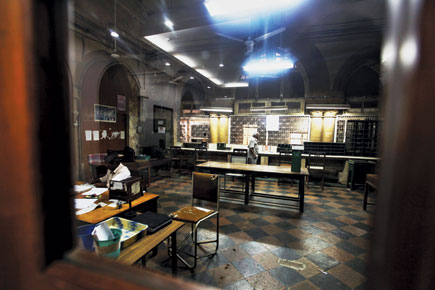 They say even the Great Indian Uprising of 1857 failed because of the telegram. As technology gallops onward, a 150-year-old tradition bites the dust


On a rainy weekday evening, people walk huddled under black umbrellas to Mumbai’s Churchgate station. Nearby, at the Central Telegraph Office (CTO), Pradip Borse sits on a wooden chair in a decaying chamber of an ancient building, typing out what is surely one of his last few telegrams. Referring to a slip of paper, he writes on a computer whose monitor blinks frequently with overuse. The letters are in upper case: ‘REPORT TO DUTY IMMEDIATELY WITH WRITTEN EXPLANATION.’

Borse is a slight 55-year-old telegraphist at the CTO in Mumbai. After adding the recipient’s address and area code to the text, he considers the message. A grim smile appears on his face. Around him are at least a dozen vacant counters, and only around five are occupied. He stretches his arms and gets up on his feet to see if there’s any more work. There is none. When a peon enters the room with a bundle of telegrams that a bank needs to send its customers, Borse is not on his seat. He is standing by a window with his colleagues, contemplating the rains.

Last week, like many other telegraph offices, Mumbai’s CTO received a page-long note from the service’s head office in Delhi declaring that telegram operations in India would be wound up by 15 July. “That’s it,” Borse says, “all the history, all the memories, everything. Just one letter… and that’s it.”

Mumbai’s CTO IS almost as old as the telegram itself. Built in 1872, it is a grey stone building with large brown windows and arched passageways that has seen thousands of individuals send taars (literally ‘wires’ in Hindi) of all kinds down the decades. Till the 1980s, it is said, this office alone sent at least 3,000 telegrams daily. Now, with quicker means of communications available, the numbers are abysmal. In 2009, the cost of a telegram was raised from Rs 5 to Rs 25 for every 30 words. In the face of free email and cheap SMS services, it didn’t stand a chance. On a recent visit to the office at its closing time of 8 pm, I learnt that only 19 telegrams were sent that day.

The counters at the entrance still appear well-maintained, perhaps because a large section of the office is designated for the use of Bharat Sanchar Nigam Ltd’s mobile and internet services. But most of the building’s interiors are empty and dilapidated. Some staircases are broken, ceilings are ridden with soot, and walls crawl with lizards and insects.

VA Kardhakar, who works as a public relations officer with BSNL, says everyone in the telegraph department knew that the service would close down one day. BSNL has been handling telegraph services ever since the postal department was divested of the service in the 1990s. “Apart from a few institutions and some old individuals who still seem to like sending a telegram, very few use this service. But when the letter came [announcing its end], we all still felt shocked,” she says, seated in a room so large it seems like an anachronism.

Over the years, the department has been fighting to stay alive. All recruitment was stopped in the 1980s. So, barring the few who were hired on compassionate grounds (such as a job moving to the next-of-kin in the event of a death of a BSNL employee), much of the staff is on the verge of retirement. Many have been moved to other BSNL departments. In 2008, there were over 22,000 employees working with telegraph services across the country. Today, the figure is less than 1,000.

Rama Nair, who works as the chief section supervisor at the phonogram department of telegram services, recalls the CTO as a hub of noisy activity. A phonogram is a telegram dictated over the phone via a local call made to the CTO, with its charges added to the customer’s telephone bill. “In the 1980s and before, once you entered the office, you could hear the continuous noise of teleprinters, of hundreds of fingers working on noisy keyboards,” she says, “There was always work; we were extremely busy, but we were happy.”

Nair guards the telephone as she speaks. When it rings, she takes the call and jots down the number in a large logbook. She then asks a junior staffer to return the call and take down the message for a telegram. “All of this,” she waves across the empty room, “and the floor above was filled with people.” Nair is from Kerala. Many years ago, she was in Mumbai on a visit to her sister and stayed back on getting the job of a clerk in the telegraph department. “At that time, it was a prestigious job,” she reminisces, “One at least needed a first division in one’s matriculate examination. I had 75.5 per cent.”

The CTO’s old staffers have bagfuls of stories to share of their experiences. During Borse’s early days at the office, he received a message for the Maharashtra Governor’s office. It read: ‘Payment not received. Starting.’ Borse’s boss was worried that the person concerned was starting for the Governor’s bungalow to collect his payment. When they checked again with the telegraphist who had sent the message, they learnt that Borse had misheard the Morse code. The sender meant ‘starving’, not ‘starting’.

A few months ago, Borse was unsure if he should let a telegram pass. A woman from Uttar Pradesh, who had lived in Mumbai, had written to a police station in the city citing obscene words that an abuser was harassing her with. Borse couldn’t decide if he should strike it down as ‘objectionable’. “I consulted a few colleagues,” he says, “But since she was writing about an experience, we let it through.”

There have, of course, been many messages that the office has spiked: abusive telegrams for political leaders, for example. These, the staff would dutifully not pass on. A few years ago, Borse flagged down a telegram that was trying to warn a thief that the police were looking for him. “You see,” he says, “we don’t just blindly send anything. We make decisions too.”

India’s telegram chapter began in 1850 when the East India Company strung up the country’s first 27 mile-long telegraph line between Calcutta and Diamond Harbour, located on the periphery of that city. It was set up by William Brooke O’Shaughnessy, who worked as a surgeon with the Company and taught chemistry at Calcutta Medical College. According to the book Science, Technology and Medicine in Colonial India by David Arnold, O’Shaughnessy conducted his own prior trials with electric telegraphs in 1839. He then built a 21-mile-long experimental line near Calcutta. To protect the line from heat and humidity, he used cables that were thicker than in Europe and North America, and covered them with an impervious layer of cloth and pitch. Writes Arnold: ‘From a few miles of line in 1851, telegraphs had extended over 4,250 miles of India and linked forty-six receiving stations by the end of 1856… By 1865 there were 17,500 miles of telegraph lines, rising by 52,900 miles by the end of the century. By 1939, India’s 100,000 miles of lines carried 17 million telegraphic messages a year.’

After submarine cables between India and Britain were laid in 1870, telegraph services proved a vital link between the Subcontinent and the British Empire’s command centre in London. It was a political imperative for the Raj, which needed reliable and quick transmission of information over vast distances.

One of the first uses of the telegraph, Arnold writes, was its carriage of the news of the fall of Rangoon during the second Anglo-Burmese war to Lord Dalhousie in Calcutta in April 1852. According to an oft-repeated saying, perhaps exaggerated, India’s 1857 Uprising failed because the British had the advantage of telegraphic communication. The colonialists, it is said, got wind of revolts in various parts of the country through telegrams. The telegraph, however, came to be adopted by Indians and the English alike in time to come. ‘… by the early twentieth century,’ Arnold writes, ‘neither government officials [nor] nationalist politicians seemed able to function without a daily diet of telegrams.’

The dependence on physical wires ended only in the early 1990s, according to Shameem Akhtar, senior general manager of telegraph services at BSNL. That was when India adopted the SFMSS (Store and Forward Message Switching System), which switched to airwave transmission towers for the relay of messages. In 2006, the technology was switched yet again, this time to the web-based telegraphy message system (WTMS), which has been in use since.

According to Akhtar, the telegraph department was bound to shut down, considering the losses it was making. Last year, according to BSNL, it lost a little more than Rs 135 crore. Since 2006, the department has piled up losses of over Rs 1,400 crore. “Save a handful, who uses telegrams these days?” Akhtar asks. “People hardly even use PCOs (public call offices).” Akhtar claims that BSNL approached the Union Ministry of Telecommunications to ask if the Centre would subsidise telegraph services, but was turned down.

Of the millions of telegrams that were sent and received daily across India in the not-too-distant past, the all-India traffic is estimated to have fallen to less than 5,000 messages a day. Most of these are messages sent by institutions like the Army, apart from banks and courts that still stick to their old processes to convey information to individuals.

The day after the announcement, the main workers union of BSNL sought to have the decision revoked. A day later, realism struck, and it has toned its demand down. All the union now wants is that telegraph staffers are not transferred to BSNL’s faraway centres.

It is evening and Jawaharlal Kannanjiya is seated at a counter marked ‘Telegrams’. Three other counters with the same sign are empty. Opposite him, BSNL’s mobile services counters are humming with activity. At 7.30 pm, like every evening, Kannanjiya’s friend Manohar Chavan arrives with a few telegrams.

Chavan writes and posts telegrams for others and runs a small agency called Yogesh Tarwala. For each telegram, he charges a commission of Rs 10. The agency was started in 1958, a time when it would sometimes get requests for as many as 2,000 telegrams a day. It charged its customers 20 paise a message back then. Now, although he doesn’t get more than 20 requests a day—mostly from traders in Mumbai asking for goods from other parts of the country—and earns most of his livelihood from a pest control agency that he runs, he continues to send telegrams for others.

Chavan and Kannanjiya exchange pleasantries. And by the time Chavan leaves, Kannanjiya’s table has 19 fully-filled-in telegram forms. As the office is about to shut, two youngsters walk in, asking for the telegraph counter. They want to send their first ever telegram to mark its demise. Even as the clock strikes 8 pm and all counters shut for the day, and as the torrential rain outside gathers strength, Kannanjiya helps the two fill their first and final telegram.