The King Who Was Not

The tragic life and death of a tribal monarch in Kerala 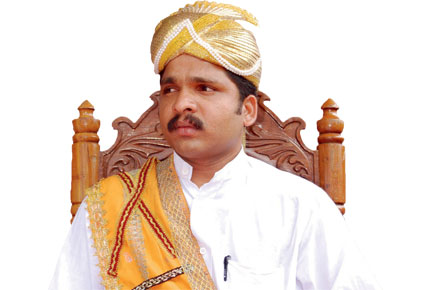 The tragic life and death of a tribal monarch in Kerala


Once upon a time only a short while ago, there was a king whose life was quite unlike that of kings in fairy tales. He did not have a lofty castle full of paintings and sculptures. Nor did he have a darbar full of music, art and dialogue. Crowned four years ago at the age of 25, kingship did not bring him any wealth or luxury. Instead, it made his life harder to live. Sovereignty over his subjects did him no wonders at all. He struggled to make ends meet, scrounging for bare essentials. He was king, and therefore unemployed; a sovereign, after all, cannot do anything as menial as use his hands and legs—or even head—to make a living for himself. He could bask in the reflected glory of his lineage and royal status all he wanted, but that, as it turned out, was hardly enough to keep body and soul together.

Ariyan Raja Mannan, 16th king of the Mannan Dynasty of tribals in Kerala, lived a king and died in poverty.

When the king took ill late last month, his relatives could not afford any better medical care than what was available cheaply close at hand. But when he died on 28 December, he was mourned by more than just his family and subjects. He was granted a funeral with a proper guard of honour by the state of Kerala.

Kerala’s  Mannans, ONE among 36 extant tribal communities in the state, have long attracted media attention for claiming sovereignty over a ‘kingdom’ of their own, the only one of its kind in South India. They trace their origin back to the early 18th century, when several tribes fled Tamil Nadu during a nasty war between Chola and Pandya kings.

The Mannan tribe operates a unique system of self-governance in South India (the Northeast has similar arrangements) that is headed by a king who is aided by a council of ministers and considered the sovereign ruler of 47 Mannan settlements in Kerala. Dynastic succession is matrilineal. Ariyan Raja Mannan, whose original name was Rameshan, was preceded by his uncle Thevan Raja Mannan, who had ruled for 12 years after his 1995 coronation. It was this ruler’s death that left Rameshan, a metal quarry worker at the time, with the burden of kingship. He was the eldest of Thevan Raja’s nephews, and was therefore picked in 2007 as the rightful heir.

At 25, Ariyan Raja was too young for the role when he ascended the throne, say many. “He was not prepared to take over such a responsibility,” sighs the young king’s bereaved wife, Santhi, “He was very naïve.” Others have similar views. “He was a good soul, but was not as smart as his predecessor, Thevan Raja Mannan,” says Mathew George, former president of the Kanchiyar Panchayat, the seat of local self-governance (and royal power too).

Having been a Panchayat member for over 12 years, George knew the king quite closely. “In personal conversations, he used to express anguish over the burden of royalty, which prevented him from seeking employment, but he was very keen on the community’s welfare.” George’s memory of King Ariyan Raja Mannan is that of a man of limited means and grand ideals, someone who wanted to do something significant for his community but was just not up to the task.

Not to imply that the king did not enjoy sovereignty over the tribe’s civil life. He did and nobody disputes it. “Under the community’s own system of governance, any dispute between individuals or families was brought to the king,” says Thomas Jose, a local journalist. The king would settle matters of marriage, divorce and much else with the aid of his council of ministers, a sort of federal grouping of Mannan leaders of different settlements, including nine Kanis (community leaders) and seven of their assistants.

Apart from settling disputes within the community, these ministers would also help the king attend to matters of ‘external affairs’: negotiating the constitutional rights of Adivasis with the Modern State, for example. As you could expect, the king’s engagement with the State was as tortuous as that of any other Indian citizen. “Both Ariyan Raja Mannan and his predecessor had actively participated in many local struggles for roads, infrastructure development and the rights of Adivasis to land,” says George, “Ariyan Raja Mannan had also taken part in the ongoing struggle by the Mullaperiyar Action Committee to replace the old reservoir.” Such activism helped the king attract media attention, he adds.

Still, the king was a supplicant at best. Without an army of his own to enforce his writ, he needed the State’s compliance to get what he wanted done for his people’s welfare. And with State functionaries granting him no more than a token display of reverence, even that was difficult. KS Biji Mol, an MLA who represents Peerumedu (Idukki district) in the Kerala Assembly, also remembers Ariyan Raja Mannan—fondly—as “a good soul” who was “not smart enough to voice the concerns of the community”; his uncle, she adds, was a “better ruler”. But then, the legislator also believes that such rulers should not be allowed to wield too much power; the days of royal privileges are long gone, are they not? “If a powerful ruler comes,” she warns, “the community may go out of our control.”

Biji Mol speaks from experience. King Thevan Raja Mannan had a record of leading land occupation agitations, and under him, tribal squatters—as the State saw them—had once taken over 50 acres of revenue land, demanding land titles for themselves. “The king was inspired by the struggle led by Adivasi leader CK Janu in Wayanadu,” says Thankappan, a cousin of the late Ariyan Raja Mannan. It was in 2002 that a group of Adivasis occupied a patch of revenue land in Pooppara in Idukki district. The king took leadership of the struggle once the police evicted the agitators. It took a month-long satyagraha by the king for the government to relent, allotting 47 tribal families the formal right to the land in question.

Ariyan Raja Mannan tried to emulate his uncle. In 2010, he led a movement to have the Public Works Department take over a road to Kovilmala, so that it was maintained better. A year earlier, he had staged a dharna at the Panchayat for electrification of Mannan settlements. It has always helped that tribals have the sympathy of many others in Kerala as well.

“The state government has not taken any step to include tribal areas in the Fifth Schedule of the Constitution that entitles autonomy to Indian tribes,” says VS Subhash, an anthropologist and research officer with the state’s Tribal Development Department. The State, he feels, wants to deny them both autonomy and powerful leadership.

Unlike his uncle and former King Thevan, Ariyan Raja Mannan himself was landless. He was staying with his wife’s family in Muringattupadi, 7 km away from the dynasty’s traditional headquarters in Kovilmala, where his ‘palace’ was occupied by the former king’s wife, children and other family members. He had been anointed king, but had no royal dwelling to stay in. So he sought financial assistance from the government to build a house on land occupied by his wife. Unfortunately, he never got to live there. It was still under construction when he died.

The king, whisper sources close to his family, was addicted to liquor. “He was under medication for three months,” admits his wife Santhi, who says she had no clear idea of what ailed him, only realising how serious it was when she heard he had been admitted (by his parents) to a private hospital nearby with a chest pain. It was a case of gastroenteritis, the hospital authorities said, and recommended that he be shifted to the Medical College in Kottayam. The recommendation was ignored. “Nobody told me anything,” says Santhi, “I was not even informed that he was seriously ill.”

Four days after his admission to hospital, the 16th king of the Mannan Dynasty succumbed to a cardiac arrest.

With King Ariyan Raja Mannan gone, the dynasty’s matrilineal system of choosing heirs now appears to be in some crisis. The deceased king is survived by a sister, but she does not have a son. She has only three daughters. This leaves the succession open to contest. Raghavan, former King Thevan’s elder brother, shows no flicker of doubt about his own eligibility. “Having a powerful leader is all that matters,” he asserts, “We have to break customary laws if necessary. Most Kanis support me.” Following a matrilineal system for its own sake, he argues, is pointless.

So, is Raghavan the likely next king? “It will never happen,” scoffs Chakkan Balan, a Panchayat member popularly known as ‘Ilaya Raja’ (junior king) within the community, and also Ariyan Raja’s cousin. “We cannot abandon customary practices—it will only invite God’s wrath,” he says. Chakkan Balan’s nominee for the crown is Raman, the son of Thevan’s elder sister (Ariyan was the son of Thevan’s younger sister). Thankappan, another cousin of Ariyan Raja, also supports Raman; in his view, the king’s brother does not have any claim to succession. And so most family members support Raman, he says.

A shrewd minister is also playing a role in the succession drama. Rajappan, who served both Thevan Raja and Ariyan Raja, has thrown his weight behind Raghavan’s claim—on the argument of the need for a competent ruler. A couple of years earlier, Raghavan had made an abortive attempt to oust Ariyan from power; he had called a secret meeting to lead the coup, but only two Kanis showed up. Sources close to Ariyan Raja’s family believe Rajappan was the chief conspirator back then.

Rajappan, though, claims to have been of nothing but support to Ariyan Raja. “The king and his family had financial problems,” he says, “I used to help him.” This he did by charging all royal visitors a fee for an audience with the king, he claims, and handing the money over to the hard-up Ariyan Raja. The former king’s family members reject this claim. “It is true that Rajappan used to accept money from visitors,” says one, “but nothing was given to the king.” Who is lying, one doesn’t know, but Rajappan seems habituated to asking for an audience fee; he demanded cash from Open to have himself photographed.

The Mannan Dynasty’s new king—whoever is finally chosen—is scheduled to be enthroned on 4 March, the day of the traditional harvest festival celebrated every year. Amid much fanfare, gift-bearing fellow tribals will stream past to pay their respects. Representatives of the State—the local MLA, Panchayat members, the police and the media—will be watching. What difference it will make, no one can say. But we’ve not heard the last of the State-versus-Adivasi saga in South India’s tribal belt.