The Indian Search for Extraterrestrials

…or the story of life’s origins 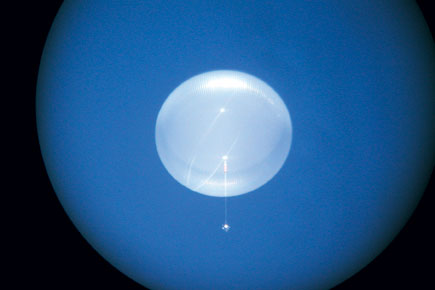 …or the story of life’s origins


Why do people take the trouble to climb mountains just to see the source of a river when the river tumbles down to the plains anyway? It is a thought of the central character in RK Narayan’s Guide, who has a mild contempt for those who go in search of the source when they can wait on the plains instead. It is also the wisdom at the heart of the Indian search for extraterrestrials.

Man’s search for aliens is in truth man’s search for organic aliens. That is the only form of life we can comprehend. The reason why scientists who are in this quest look for planets and moons that contain water and other things that can support life as we know it. But what if, to begin with, all life on earth had come from elsewhere through microbial spores riding on comets and other fragments of destroyed worlds? In spore form, microbes are almost eternal, they can withstand conditions that we deem extreme and they can go on living for millions of years. It is a possibility. And if alien spores had once fallen on Earth, they are probably still falling.

So, in 2001, a group of Indian scientists sent a balloon about 40 kilometres above the Earth to see if they can nab alien microbes that were tumbling down from space. The payload of the balloon had highly sophisticated sterilised cans that were designed to capture air samples and bring them back. But for rockets, balloons and shuttles, nothing on Earth, not even volcanic ash, rises beyond 20 kilometres. So if there were microbes at an altitude of 40 kilometres then, in all probability, they were coming down and not going up.

The probe, which was launched from the Tata Insti- tute of Fundamental Research’s balloon launch facility in Hyderabad, and funded by the Indian Space Research Organisation, was headed by astrophysicist Jayant Narlikar.

Narlikar has spent a good part of his scientific career questioning the Big Bang theory—the hypothesis that the universe, including space and time, were created when an unimaginably minuscule point of almost infinite energy inexplicably and suddenly expanded to become everything.

When I interviewed him about ten years ago, he was standing outside the Homi Bhabha Auditorium in Mumbai, holding a glass of chai and looking severely at everything around him. He said that according to the Big Bang theory, the universe was created “in about three minutes” after something happened to nothing. “Chai takes longer.” He told me, with occasional angry chuckles, that the Big Bang theory became popular, in part, because of a Western philosophical thought which is also very Christian at heart—that everything has a beginning and an end. The Big Bang says exactly that about the universe. Even Pope John Paul II, who in 1992 accepted that the Earth goes around the Sun, endorsed the Big Bang theory because it left room for God to do something—to create the Big Bang, for instance.

When the idea of a neat cosmic inception first gained support among scientists, British astrophysicist Fred Hoyle found it repulsive and he ridiculed such a mythical beginning as ‘Big Bang’, inadvertently giving the theory he hated an enduring name. Narlikar was one of Hoyle’s favourite pupils and it is not surprising that Narlikar has inherited Hoyle’s greatest foe—the Big Bang theory—and his beloved hypothesis, that all life on earth was seeded by extraterrestrial spores.

Nothing conclusive came out of the first Indian balloon mission, but the second probe, which was sent in 2005, came back with some intriguing things in the air samples. There were some bacteria that were known to man, but there were also three strains that had never been found on Earth. They have been named Hoylei, after Hoyle; Isronensis, because Isro funded the probe; and Aryabhatta, the ancient Indian astronomer and Isro’s first satellite.

It is too early to say if these are, finally, our deserved aliens. Or if it is just that, contrary to scientific claims, microbes from earth do rise beyond 20 kilometres. “The analysis is extremely difficult and very complicated,” Narlikar says in a phone interview. Next year, his team will send another probe.

So far, the two probes have cost less than a crore, he says. It was inevitable that when Indians began to search for extraterrestrials, they would do it very cheaply.

In 2001, a bizarre phenomenon in Kerala excited many leading scientists who are interested in the cosmic ancestry theory. Red rain fell on some areas in Kerala. A scientist from the state claimed that the red rain was a result of a meteor burst and that the particles that had fallen included alien microbes—a hypothesis that has since been largely dismissed. It is now believed that the colour of the rain was caused by airborne spores of a type of algae that is commonly found in Kerala.

There is another way of searching for aliens which, like the balloon mission, waits for the river to come tumbling down. Through arrays of massive radio telescopes that gape at the sky, radio astronomers search for signals from space that are not from natural sources. In the control rooms of some of these arrays of radio telescopes, there are champagne bottles meant to be opened when there is an alien contact.

India too has such an array near Pune, which is owned by the TIFR, but the control room here does not have a champagne bottle. These telescopes do not search for extraterrestrial intelligence as that is not a priority for Indian science right now. Govind Swarup, the most prominent Indian astronomer, has a very strong emotional relationship with the Indian array of radio telescopes. About five years ago, when The Times of India ran an illustration showing an Indian urinating at the foot of a radio telescope, Swarup was wounded enough to write an angry letter to the editor. He said the illustration, which showed ‘a man making a nuisance of himself,’ had desecrated Indian radio astronomy. Swarup has consistently tried to generate interest in SETI (search for extraterrestrial intelligence) in India, but has largely failed. He told me, about five years ago, “It seems, in our country, they want to do what they think is serious science. But we certainly have the means to search.”