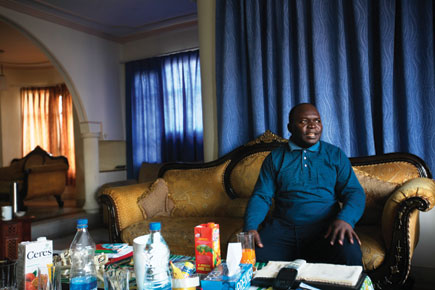 
Nasser Okoth, First Secretary, political, Kenyan High Commission, answers the door himself. It is 10 am on a Sunday.

“Ah, you are here. I was sleeping. I had to go to the airport at 3 am.” He leads us to his living room in one of those builder-floor-type houses in Vasant Vihar that are so popular with diplomats.

On his walls are pictures of his president, Mwai Kibaki (with his full title: ‘President and Commander-in-chief of Armed Forces, Republic of Kenya’) and a framed Manchester United emblem. On the table, there’s a line of elephants carved in faux ivory. He puts on some African pop on his system, and fetches a tetrapack of juice and couple of glasses. It is a bachelor’s house, though Okoth is not a bachelor.

“I am still trying to make it comfortable. They are supposed to replace these seats. These were put by the person who I replaced. In the new financial year, in January, I get the funds and put a few things that make it look like a diplomat’s house… I don’t like this colour.” The upholstery was standard Punjabi gold; or Punjabi gold standard, if you wanted to look at it that way.

He went on: “I said, ‘Give me a maroon sofa set’ … If the lady were here, she would have transformed this place into something completely different.”
“You mean your wife?”

When he does let it out, Okoth has a hearty laugh. He lets it out now, before saying: “Mrs Okoth.”

It wasn’t easy getting to this stage with Okoth. For the life of me, I couldn’t figure out why. A weekday appointment at the High Commission had been a bit of a disaster. Having agreed on 11 am, Okoth made time at around 12, because urgent matters had come up.

Up the stairs to the floor on which the diplomats sit, a lady pointed us to Okoth’s room: “The door next to the liquor.” (That is, adjacent to the glass cabinet showing off some Kenyan booze.) “I can give you two minutes,” he said, before going on to speak for about 20 on subjects such as WikiLeaks, this magazine, and how the media “cannot be used to destroy somebody”.

Bwana, this is a lifestyle story, I explained. It’s about your life in India. We settled on a weekend meeting at his Poorvi Marg home in Vasant Vihar, New Delhi.
So there we were, photographer Ishan and I, in Okoth’s drawing room, sitting on sofas he wasn’t particularly happy with.

Okoth is 40 and has been in India four months. He is still in the process of making his stay comfortable, making his house “look like a diplomat’s home”.
I ask him whether he’s been around Delhi. Are there places he likes?

“There are places I like to visit. Like say, these malls. Shopping malls. I go to buy one or two things I need. I buy house items, personal items. And items I need for my house back in Kenya. Things like curtains. I look at where I can get curtains. One for my Nairobi house and one for my rural house in Kisumu (on the banks of Lake Victoria) where my parents have retired.”

I have to disclose a special interest here. As a boy, I lived in East Africa. In Tanzania. In an obscure town called Kilosa, where President Nyerere wanted a sisal carpet factory set up, and my dad was hired.

In no time, I was speaking fluent Swahili. Playing draughts with the manager Mr Nkuba’s brother, playing ball with Orestisi, the factotum, and getting inoculated by Dr Chausa.

Ours was the first of four houses on a hill. Up a track our second-hand Beetle could barely negotiate in the rains. Once in a while, we’d hear the roar of wild animals very close by. Or get to see a 15-foot python that had been killed on the plantation. During holidays, we would visit game parks one by one. Ngorongoro, Mekume, Terengere. I was in love with the names. I was in love with the places. I still am. It’s easy to fall in love with East Africa.

“Even today, I was dreaming that I was at home,” said Okoth. “Then I realised it’s just a dream, I’m in Delhi. All of a sudden, there’s a bell. I hope you didn’t ring more than once.”

I asked him what he missed about home.

“I practise farming at home. I grow sugarcane.”

“Do you have a large farm?”

“It is a medium-scale farm. We grow cane and maize. And season crops.”

“The returns. When the environment is very natural, you see the cane growing up (sic), and it is very green. You see the maize growing up, and you see what? You have something to eat and something to sell. The surplus… Even here, I eat boiled maize 3-4 times a week.”

At other times, he likes to eat Indian curry made Kenyan style (his help worked for a Kenyan earlier), or if he’s in Connaught Place, he treats himself to either McDonald’s or KFC. Not exactly embassy party fare.

Eating is a big part of Kenyan life. It is also a metaphor for Kenya’s recent history. A fascinating recent book, It’s Our Turn to Eat, the story of a bureaucrat caught in a triangular corruption contest, has made it so. It’s the tale of how three major tribal formations in Kenya take turns at plundering a country which, in per capita income terms, is at number 200.

The current president is from the dominant Kikuyu group. Okoth, whose name means ‘born during the rains’, is a Luo (like Barack Obama’s paternal ancestors), a smaller group emboldened by the last, violent Kenyan election to claim its share of power in the Kibaki administration. They believed it was their turn to eat, and that is how it has been.

“A human being, it’s natural that he goes through what we call affluenza. Where you want more, more, more. More than your neighbour. You want more than your colleague…” says Okoth. It is his belief that without corruption Africa would be a different place. Of course it would.

But corruption seems to follow Africa around. The stench of it certainly does. Many landlords in the Vasant Vihar area won’t lease houses to Africans, diplomats included. There have been allegations of involvement in the drug trade, bootlegging duty-free booze, various internet scams, and so on. And then there are secular reasons. “They don’t have the budgets for the upkeep of the house,” a house owner told me.

At Rs 2 lakh upwards a month, homes in the area come for about thrice what the average Kenyan earns in a year. But “more” is required—in a neighbourhood that houses the embassies of Malawi, Angola, Gabon (the list is long)… and let’s not forget, the office of the World Food Programme.

The Poorvi Marg life is very different from the one back home for Okoth, which he suggests is an agrarian idyll with green and game all around.

“In the national park in Nairobi—it is like from here to the Indira Gandhi airport—I like watching the game. Here I have only seen an elephant… people climbing an elephant… near here somewhere.”

Perhaps it was the same elephant that had done its considerable business that morning at the head of Okoth’s lane. I had noticed this as we approached, some of the dung baking in the December sun after being flattened to thin crust-strips by unsuspecting tyres.

Okoth does have a vague plan to make his stay in India worthwhile. He would dearly like to go back after his four years here as Dr Okoth, with a PhD in international relations. He claims, though, that the Indian Government doesn’t encourage this.

“I have established a small library in my bedroom,” says Okoth, “Newspapers, magazines, even books I have been buying.”

“What are you reading now?”

“Which book are you reading?”

(That laugh again) “I am reading current books.”

Although his office is adjacent to the liquor cabinet, Okoth is a teetotaller. He points out with naïve charm that his predecessor “enjoyed himself in India because he drank beer”.

Quite apart from the fact that you can enjoy yourself pretty much anywhere if you drink beer, I have a fair idea of the importance of this beverage in East Africa. In Tanzania, a country almost deliberately kept poor through a weird brand of socialism during the interminable Nyerere years, people accepted everything—except a beer price hike. A two-cent rise in the 1970s caused a nationwide strike. In Kilosa, train drivers would regularly go missing, leaving hundreds stranded. They would eventually be coaxed out of the Zodiac (the town’s only bar). And when would the train leave? Always, “baado, baado (later, later).”

Nasser Okoth told us he would meet us a little later as well. After chatting for about an hour, I suggested we have lunch at the nearby Golden Dragon restaurant (a favourite of his) in a couple of hours, so we could talk some more.

When I called him, he said he had just had breakfast and was feeling too full to eat lunch.

I fixed an appointment the next day: “Meet me outside my office at 5.30 in the evening,” he said.

We turned up. He wouldn’t.

For reasons that baffled us, he had disappeared behind a Kenyan curtain.