Gita Gopinath, professor of economics at Harvard University, spoke to Open on the first Budget presented by the Narendra Modi government 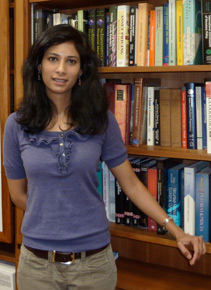 Gita Gopinath, economics professor at Harvard University, spoke to Open on the first Budget presented by the Narendra Modi government

Do you think this Budget is aimed at reviving the economy?
The budget sticks pretty close to the BJP manifesto and does a good job signalling a pro-investor and pro-business environment. The problem with the previous government was not so much about policy agenda but about getting things done. This government understands the importance of effective governance and has announced several measures to streamline decision making. That in and of itself is a reason for optimism about the economy.

The finance minister has retained the fiscal deficit target for 2014-15 at 4.1 per cent of GDP and plans to reduce it further to 3 per cent by 2016-17. Do you think these are viable targets?
I find the budget short of details on how precisely the fiscal deficit will be reined in, especially in the short term. There is some increase in indirect tax revenues factored in but I suspect the hope is that growth will rebound quickly and help with fiscal consolidation. I am encouraged that there is progress being made towards GST and of better managing subsidies including fertilizer subsidies, but the details of this are yet to be outlined.

Though the Finance Minister has made the right noises and promises, he has not scrapped the retroactive tax law. Are you a bit disappointed? Or do you think the FM has made doing business in India more attractive than his predecessors?
While slightly disappointed, I guess I am not surprised. You never want to say never. I doubt this will be a deal breaker for prospective investors. There is plenty in the budget that caters positively to investor sentiment.

Is the target of 7-8% GDP growth in 3-4 years a highly ambitious target? Are you cautiously optimistic?
This is a reasonable target. If investment is revived in industry, infrastructure projects are executed and the ease of doing business is improved, a 7-8% growth rate is well within reach.

What does this Budget mean towards revving the manufacturing sector?
The budget places a lot of emphasis on reviving manufacturing. Several policies are targeted at manufacturing such as raising FDI limits in defense, reducing customs duty on specific products, creation of new manufacturing clusters, besides the general emphasis on better roads and transport networks that will support manufacturing growth. There is also a big push for encouraging entrepreneurship with funds to finance start-ups. There was little said about the labor laws and that is an area that needs to be addressed for manufacturing.