The Agony and the Idiocy 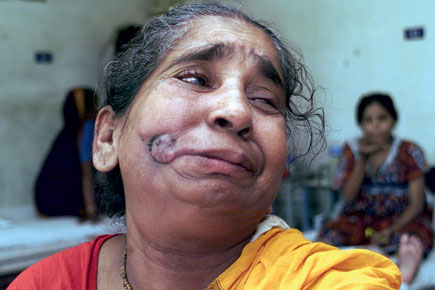 
On a visit to my father recently at his home in a Punjab village, we ran out of conversation. Casting around for a topic, I asked about the neighbour’s daughter who had been hospitalised with breast cancer. “She died last month,” my father replied, “Everyone in the village used to hear her shrieking. The hospital said there was nothing they could do and sent her home.” We both left it at that, unwilling to go further in that sombre direction.

The poor die differently from you and me. Cancer patients die in agony, making sounds that chill one’s spine. The Indian Government in its diabolical perversity deprives them of the only blessed substance that can ease their suffering: morphine.

Most government hospitals, assuming they have such luxuries as oncologists, have no supplies of morphine. When patients are diagnosed with cancer and have no money to go to a private hospital, they walk out of the hospital gates to return to their villages or slums to confront a horrifying death. The only other thing my father told me—later—about the neighbour’s daughter was that she used to beg her parents to throw her into the village pond.

The paradox is that India is one of the world’s biggest producers of legitimate opium, the poppy extract from which morphine is made. But some 75 per cent of it is exported to the West, with the rest used very sparingly for the manufacture of morphine, which very few drug makers are licensed to do (most of it, again, for export). So while people suffering cancer, AIDS or other serious diseases in North America and Europe get morphine, Indians endure excruciating pain.

The reason for this is a law that is not just stupid but sadistic in effect. The Narcotic Drugs and Substance Abuse Act of 1985, aimed at curbing drug trafficking, lumps morphine with other drugs as a ‘narcotic’ (which of course it is) and imposes draconian restrictions on its manufacture and availability, even for medicinal use. As a result of this law, it is scarce almost to the point utter unavailability in India, and doctors rarely ever prescribe it. To get their hands on morphine, hospitals have to apply for a special licence, which can take five or six years. Even if they manage to negotiate the red tape and obtain a licence, applications for four more permits must be made: to transport it, move it across states, store it and prescribe it. A doctor found prescribing morphine without the requisite licence can be thrown into jail without bail.

Given the general unavailability of morphine since 1985, doctors have lost the ‘art’ of administering it. Morphine has to be carefully calibrated, depending on the patient’s condition and level of pain, because of its numerous side-effects.

Some years ago, after protests by groups such as the Indian Association of Palliative Care, the Government modified the law to allow states easier access to morphine, but only one third have acted on this provision.

Why bother? The rich will always get morphine if they need it. As for the poor, let them scream away, let them die without dignity. The Indian elite’s indifference towards the poor is so monstrous in every single aspect that no one has seen it fit in 26 years to amend the law.

Even globally, the use of morphine represents a rich-poor divide. North America and Europe account for nearly 90 per cent of its consumption worldwide. Poor countries consume only 6 per cent. Across the world, it is the poor who suffer. The difference is that most of these countries are not opium growers, as India is. In Rajasthan, fields ablaze with poppy plants stretch out over the horizon, but fewer than 10 hospitals or pharmacies in the state stock morphine.

Earlier this month, the WHO excoriated India for its ‘sub-optimal’ use of morphine and urged the country to make it more easily available. The Health Ministry is finally thinking of amending the law to let the terminally ill gain access to this deliverer from pain.

So special is this wondrous compound that the security protocols that surround it resemble those for plutonium. International rules specify that its steel storage cabinet must be 10 mm in thickness and fixed to the wall or floor. It must be double-locked at all times. Two people must be present whenever the hallowed cabinet is opened. Moreover, a register has to be signed if and when any morphine is taken from the cabinet, something that can only be done by certified medical practitioners, and this act must have two certified witnesses who sign. The exact quantity taken must specified, and, when it is administered to a patient, the ward nurse and matron have to sign as well. Even the prescription must be written by hand in an FDA-approved format.

If and when the law is finally amended, millions of terminally ill Indians will be able to die in dignity, without pain—or at least not more than what they can bear. But it will be too late for those whose agonised deaths haunt the memories of their loved ones.