Questions that continue to confound us 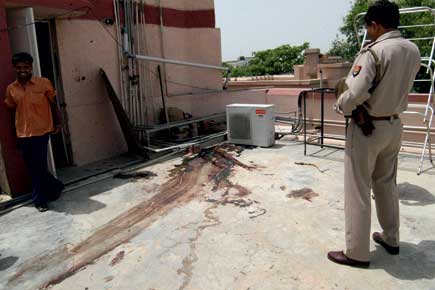 Questions that continue to confound us


Aarushi Talwar, 14, and Hemraj, 40, a Nepali citizen, were murdered on the night of 15 May 2008, between midnight and 1 am. Four years later, the murder trial is finally due to start. This has happened despite the CBI arriving at no final conclusions after two years of investigating the case. The CBI closure report that led to the trial observed that the agency was seeking closure of the case because there were ‘critical and substantial gaps’ in the circumstantial evidence collected and an ‘absence of a clear-cut motive and incomplete understanding of the sequence of events.’ Aarushi’s parents, Nupur and Rajesh Talwar, opposed the CBI’s move. In February last year, a special CBI court agreed to their plea that there was enough evidence for a meaningful trial. The court made the CBI closure report the basis for a chargesheet, but the decision came with a rider—Aarushi’s murder case would be tried with her parents, Nupur and Rajesh, as the main accused.

From the very beginning, the case has never been short of media attention, and differing perceptions of the case have aroused strong passions and opinions. Two differing human emotions have come together to create this interest: one is grief at a young girl’s tragic death and incredulity that her parents could even be thought to be involved in the murder. For some, this is inconceivable, it goes against their conception of human nature; for others, it is the only explanation that seems to fit the facts. It is another matter that in both these narratives, the murder of Hemraj, and the story of the domestic staff once accused of the crime become only an appendage to the main story.

The other is the baffling nature of the circumstances surrounding the murders. It is a whodunnit lifted out of the most classic murder mystery—a locked household and no signs of a forced entry. Add to this the constant and repeated bungling by the police and clear attempts to tamper with evidence by people whose roles have not been fully investigated or explained, and we are left with a puzzle that defies any easy solution. Much has been written about the case, but in the details that have been argued over and examined in the media, the overall picture remains fuzzy. We attempt to give the clearest picture yet of what exactly was found on the morning of the murder and the questions that still remain unanswered.

On the morning after the murders, 16 May 2008, at 6 am, the maid, Bharati, as was her daily routine, rang the doorbell to the Talwars’ second floor apartment. Two doors at the entrance, an iron mesh door followed by a wooden door, separated by a passage, led to the house. Bharati was surprised to see the Talwars opening the wooden door as they were late risers. It was Hemraj who would always let her in, but today the iron mesh door was locked from the outside and Hemraj was not around. Nupur walked into Hemraj’s room, found the keys and threw them down to the ground floor out of a window as there was no way to hand them through the mesh door. Bharati went downstairs to get the keys. In her statement to the CBI, Nupur said that at this point they were not aware that Aarushi had been murdered. She then called Hemraj on his mobile, hoping to locate him. The call was answered and immediately disconnected. The tower location suggested that Hemraj’s mobile was in the vicinity of the flat at the time. Within a few minutes, Bharati returned upstairs with the keys, opened the mesh door, and entered the house—to find Nupur standing next to the dining table while Rajesh was standing at the door of Aarushi’s room. They were both in tears. They told Bharati, “Dekho  Hemraj kya karke gaya hai.” Bharati found Aarushi lying in a pool of blood on her bed, her body covered with a white bedsheet. She ran out of the flat to inform the neighbours. Nupur called her parents; the Durranis, who were friends of the Talwars; and Rajesh’s brother Dinesh Talwar to let them know what had happened. The police were informed about an hour later, at 7: 15 am.

The crime happened inside a closed house with no eyewitnesses. There were four people inside a locked house with no forced entry: two of them were murdered. Nupur and Rajesh claimed that they had slept through the night, from 12 pm to 6 am, while the murderers were in the flat. The Talwars’ bedroom door was shut and a noisy air-conditioner was running. A wooden partition separated their room from Aarushi’s.

Hemraj’s body was recovered, a day later, on the terrace of the flat by retired DSP (deputy superintendent of police) KK Gautam. But this bare statement of facts conceals a number of mysteries that remain unsolved:

1. QUESTION OF THE HOUSE KEYS

(i)  Either one or both the Talwars were involved in the murder;

(ii) Either one or both of them allowed the murderers to exit and collected the keys from them;

(iii) There was another set of keys that has so far not been mentioned by anyone related to the case.

2. THE SCENE OF THE CRIME

Both bodies had similar injuries: a fatal blow on the forehead by a blunt object and the throat slit by a small, sharp object. The blunt injury inflicted first was sufficient to cause the victim’s death. The incision wound on the neck was inflicted later. The CBI report claims that when Aarushi was assaulted the door to her bedroom was open, but provides no basis for this conclusion.

The murderers were apparently in no hurry to leave, and spent considerable time dressing up the scene of the crime. Aarushi’s body was found undisturbed on her bed despite the violent assault that caused her death (see photo above), which raises the question of whether she was killed inside the room or outside. The CBI has no conclusive answer to this question. The bedsheet was laid out smoothly, showing no signs of struggle. A circular watermark was found below her pelvic area on the bedsheet, but her visibly untied pyjamas did not have any such wet patch. This indicates that the pyjamas were pulled up after her body was swabbed clean.

The bleeding shows two distinct patterns: drainage from the incision and splashing droplets. Her schoolbag and a pink pillow lie within range of the splashed blood area but have no bloodstains on them, indicating they were placed on the bed after her murder.

3. WHO BOTCHED UP THE MEDICAL REPORTS?

» A telephonic loop was created six times between Rajesh’s brother, Dinesh Talwar, a family friend Dr Sushil Chaudhary and KK Gautam (the same retired DSP who later helped the police find Hemraj’s body) and an unidentified number, in this order, and soon after in the reverse order, on the evening of 16 May, when the post-mortem report was being prepared. This was done, the CBI maintains, to ensure that the word ‘rape’ does not appear in the post-mortem report. But the CBI has made no attempts to explain how this loop was connected to the post-mortem, and on what basis it made such a claim. Again a similar loop was created twice between 9 and 10 the next morning (17 May), just before KK Gautam helped the police recover Hemraj’s body from the Talwars’ terrace. Again there is no clarity on why this loop was created and what it was used for.

» Shockingly, it was found that Aarushi’s vaginal swabs, sent for testing at the Centre for DNA Fingerprinting and Diagnostics, Hyderabad, did not match her blood samples. In other words, the swabs did not belong to her. The CBI raided the Noida District Hospital to find that Aarushi’s original medical file, her pathology reports, autopsy findings had all gone missing. The CBI failed to establish whether the sample was switched in the hospital or at the police station. This has ensured that vital clues that could have led to the murderers were lost forever.

In the closure report, the CBI also states, ‘The vaginal orifice of the deceased was unduly large and mouth of [the] cervix was visible.’ It failed to elaborate on the significance of this statement and what it implies. The post-mortem report is silent on the possibility of sexual assault in spite of the panchanama (the first on-site police report) specifically asking whether the girl was raped. Clearly, there was a successful attempt made to erase all evidence that could have confirmed or ruled out sexual assault, but who was behind it?

4. REDISCOVERY OF THE MISSING GOLF CLUB

There were two similar sets of injuries that could have caused the deaths of Aarushi and Hemraj: a blow from a blunt object on their forehead and an incision to their neck with a sharp instrument. The blow from the blunt object left a ‘U/V’ shaped scar on the forehead. The metal base of the golf club—numbered 5, seized from Rajesh Talwar after a year—is of a dimension matching the injury mark. This club, which went missing for a year, the CBI claims, for unexplained reasons, was found by Nupur and Rajesh’s cousin, Ajay Chadda, in the loft of their house when it was being cleaned. The CBI report states that no body fluid or bloodstains were found on the golf stick.

» The parents controlled all access to Aarushi’s room. The arrangement was such that Aarushi could open the door from inside but it could be opened from the outside only with a key that Nupur usually kept with herself. Nupur is not sure whether she left the key in the door before she went to her room to sleep that night. The key was found in the lobby the next day at noon. How did it get there?

» Aarushi would usually be up late, chatting with her friends well past midnight. On 16 May, her cell phone was inactive after 9.10 pm. At midnight, her friend Anmol called on the Talwars’ landline after she didn’t respond to calls on her mobile. This call was not answered either. Anmol then sent an SMS to her cellphone at around 12.30; it was not received by Aarushi’s mobile. Rajesh was online till 12:08 pm. Why did she switch off her mobile so early that night?

» The murderers were apparently in no hurry to leave nor were they strangers to the house. After committing the murders, they procured a bottle of Ballantine’s Scotch from a concealed bar and drank it near the dining table (see point 4 in the graphic). The bottle bears bloodstains of both Aarushi and Hemraj’s blood, but no clear fingerprints could be recovered. The internet router, in Aarushi’s room, was switched off three hours after she was supposed to have been killed.

» The CBI’s investigation has only added to the bizarreness of the case. India’s premier investigative agency filed two contradictory reports based on the same pieces of evidence. The first investigation under Joint Director Arun Kumar, from June 2008 to April 2009, blamed the three domestic staff—Krishna, Raj Kumar and Vijay Mandal. The second investigation, led by Deputy Director Nilabh Kishore, after May 2009, suggested the involvement of Rajesh Talwar.

What is the CBI up to?