Terror in the Time of TV

Or when the calamity of others became the most riveting form of entertainment. 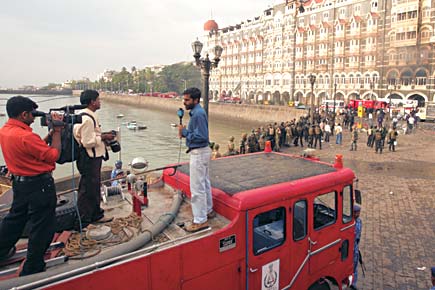 Or when the calamity of others became the most riveting form of entertainment.


The voice of Barkha Dutt is the measure of a crisis. As it grows coarser, as her throat dries, we know the situation has turned more grim. She needs water, but there she stands near the Gateway with large sad eyes and a mike in hand, once again the tragic bearer of bad news, part messenger, part message. Some say she makes news more humane. Others suggest that everything she says can be cut by five hundred words, and that her boss Prannoy Roy, who somberly calls for “a minute of silence” during national calamities, should make that request more often to her. “I don’t know what makes people angry,” Barkha says with grace, “We get slammed all the time.”

She was among the scores of reporters, some stars like her, many who joined television too late for that, who stood outside the Taj Mahal hotel and the Oberoi for nearly three days in the sudden silence of Colaba and Nariman Point, performing the toughest job in journalism. It was they who first told us of the boys who sailed on the Arabian Sea in a stolen boat from Karachi, who then massacred passengers at the Chhatrapati Shivaji Terminus, killed three of the most feared policemen in Maharashtra without knowing who they were, stood at the entrances of Cafe Leopold and fired at will, took over a building called Nariman House and invaded the Taj and Oberoi-Trident.

Nearly three days later, in a restaurant at the Oberoi, lifeless men and women still sat in their chairs, their food still on the table, according to a fireman. It was frightening, but we wanted more. Suddenly, it was hard to abandon television. We must deny that the calamity of others is really a form of entertainment. It is important to deny this.

As the commandos stormed the hotels and an unequal battle raged for 60 hours, we kept a close watch on the number of the dead. It was rising, slowly. And we insisted, while sipping tea, insisted to others who insisted the same thing, that the government was not revealing the real figure of the dead. It was as if everyone wanted the figure to be higher.

Then something might have struck you. Something very simple but chilling. That terror is television. Those boys who came in the stolen boat were the means, television was the end. It was not the dead that they wanted, it was you. Because their paradise of afterlife would be constructed inside your head and it will be there for as long as you lived.

But you wanted more, even more. For information purely, for knowledge. You have already denied that the calamity of others is entertainment. And television knew. It understood. Baba Ramdev appeared on India TV and shouted, “They think we are vegetarians… But we should show them that we can hit back… In times like this, do pranayam (every time he said, ‘pranayam’ he hurriedly shut his nose).”

A reporter who was bereft of stories reported on the pigeon casualty at the Gateway and how there was nobody to feed them. Shobhaa De, who recently began a piece saying, ‘I like Raj Thackeray’, declared on her cellphone, “Enough Is Enough”. Simi Garewal, who wears white even when she is not mourning, said that if you look down from a high-rise into the slums, you can see Pakistani flags. And she also said, “We should stop paying taxes.”

As the crisis unfolded, on the cobbled square between the Gateway and the Taj Mahal hotel, reporters and cameramen stood in wait. Times Now journalist Deepthy Menon spotted a Japanese chef who had escaped. She went to him. He was telling her that he had nothing much to say when a senior journalist from a rival channel, “almost dragged him away”.

Later, a solitary man who was looking at the Taj suddenly burst out crying. A cameraman turned. The word spread that his father was still inside. He was soon surrounded by cameras and reporters. Some tried to lead him away for an exclusive but there were too many reporters for any one channel to have that fortune. He wept and told his story to all. More people surrounded him. Big men held their cameras high. To get him. Some loafers ran to the transient crowd but they walked back disappointed. They had thought it was Sonu Nigam, but it was just some fat guy in the middle.

Mr Nigam did come eventually. And a giant swarm of black cameras and reporters surrounded him and made him vanish as if he belonged only in a television screen.

Many things about television news disgusts Arnab Goswami, the editor-in-chief of Times Now. Especially, “Star anchors who land up, divas who do not report news, who become the news, who light candles, put a hand around survivors showing fake emotion, hoping that they would cry and give a great television moment. Come on, move beyond Kargil. When you hear a blast, you don’t have to throw yourself on the floor. Everyone knows you don’t have to. You are not the story, you are not the focus.”

He has a difficult relationship with the word ‘exclusive’. He recognises its crudeness in times of unspeakable tragedy, “but sometimes we have to say it, we have to use that word”. More than the nuances of television language, he says what is important is responsibility. “We knew there was RDX being found around the Taj, but we did not want to create panic. So we did not go with the news when we first heard it.”

Barkha Dutt, NDTV group editor, shares the same views. “We were told by some officials that over a hundred bodies were inside the Taj, that more terrorists were on the loose. But we decided to wait.” She says that decency is more important to her than TRPs. “I loathe close-ups of dead bodies. I loathe the idea of reporters shoving their mikes up the faces of survivors and asking, ‘how do you feel’. But even for the most experienced journalists, there are events, like what happened in Mumbai, which create unprecedented situations. You have to react fast. You have to do things the right way, the decent way. You can only try.”

Politicians, too, tried. In the beginning. Through the impoverished prose of their no-talent speech writers which is not worth quoting, they used expressions like ‘dastardly act’ and ‘spirit of Mumbai’. Then many of them collapsed in the interminable tremors of the extraordinary coverage. Then Deputy CM RR Patil said in reference to the massacre, “In big cities, such small things do happen.”

Former Chief Minister Vilasrao Deshmukh, the relationship between whose mouth and Sonia Gandhi’s feet would make the best Fevicol ad ever, laughed and winked during a press conference that he had called to announce his “offer” to resign.

Kerala Chief Minister VS Achuthanandan, who went to pay tributes at the home of slain major Unnikrishnan, and was asked to get out by the young major’s father who also called him a “stinking dog”, retorted later, “If it were not for the major, would even a dog look at them?” Television showed all this, and it was clear once again that low-grade men, little men, were occupying very important positions.

The coverage of Mumbai’s massacres will create a desperate fellowship of politicians who will try to regulate TV in the future because they have for long lived in fear and awe of television news. They fear television not only because it insults them, but also because television is the only enemy that does not have the naïve impotence that afflicts good people and reformists. TV is brutal, as brutal as politicians themselves. They will try to control it and they must be defeated because the brutality of television is truly our last line of defence.

The images on television, the terror, death and the unending imbecility of politicians, eventually created a nameless enchanting force that dragged beautiful people from the isolation of their south Mumbai homes. They came with candles and walked on Marine Drive, they held English placards, some girls held hands and sang that defeated song no other nation sings anymore, ‘Hum honge kamyab ek din’.

Congressman Sanjay Nirupam, who once said that coastal encroachments should be converted into proper houses as a defence against tsunami, arrived, probably with a candle. He was driven away by a crowd of boys and girls, many of whom knew him as a politician because of the diabolic colour of his clothes—white. His goons tried to look menacing. The furious youngsters screamed louder. Nirupam fled in his SUV. Boys chased it, banging their fists on the windows.

Earlier, when Nariman House fell from the hands of terrorists and the siege ended, there were hundreds in the narrow lanes of Colaba. They reached out to shake the hands of the commandos. They screamed, ‘Jai Hind’. There was much love and jubilation. They celebrated the death of some boys. Man can really celebrate the death of man. That’s why those boys who came from the sea belonged here in this world. They really did. And they will be back, like television, after a short break.