“Tell me what should I tell them?” 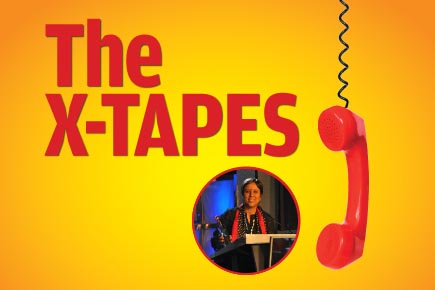 As talks between the DMK and Congress (‘them’) broke down over joining the Government in May 2009, Radia was actively involved in opening channels between the two parties through, among others, television journalist Barkha Dutt

BARKHA: No, no, no. I’ve been up, ya, most of the night. The stalemate continues, yaa.

RADIA: Yeah. Listen, the thing is that they need to talk to him directly. That is what the problem is.

BARKHA: Haan so, apparently PM’s really pissed off that they went public.

RADIA: But that’s Baalu’s doing, naa… he was not instructed by Karunanidhi to do that.

RADIA: This is not. He was told to come away and tell Congress that.

BARKHA: And he went public

RADIA: Well, the media… media, the media was standing outside.

RADIA: I’ll tell you what it is—the problem and I have had a long chat with both his wife and with the daughter right

RADIA: The problem is if the Congress has a problem with Baalu, if they have no problem with anyone. They need and go talk to Karunanidhi. They have very good relationship with Karunanidhi directly.

RADIA: So they have to tell him directly, there [are] enough Congress leaders in Tamil Nadu. They need to go in and tell him exactly—the biggest problem is that the following of Alagiri is saying that you cannot give [inaudible] a cabinet [inaudible] and keep Alagiri in the MoS state.

RADIA: He… look, if you tell him that Baalu is the only problem. I would imagine, he will drop him.

BARKHA: But you see the problem right now is also over the choice of portfolios, naa…

RADIA: No. They’ve not said anything. The portfolios have not even got discussed.

BARKHA: Congress claims, for whatever it’s worth, that the DMK wanted surface transport, power, IT, telecom, railways and health.

RADIA: You see, you see my honest advice…

RADIA: ..is that you tell them that they need to tell him directly that we are happy because Kani’s [Kanimozhi, DMK Chief Karunanidhi’s daughter] got no issue being about independent. But Alagiri is now telling her that you cannot take an independent charge if Maran remains cabinet minister.

RADIA: And Congress is sending messages through media and through various sources, saying that. And Maran is telling everyone that he is the only acceptable person.

RADIA: But that’s not correct, naa?

BARKHA: Also, but, but the Congress needs to tell Karunanidhi that we have not said anything about Maran.

BARKHA: Okay. Let me talk to them again.

RADIA: Yeah? The choice of candidate we will leave to you. We have some reservation about Baalu. And let them tell the reservation. And we have not said anything about Maran. We are not talking

In another telecon, Barkha Dutt offers Niira Radia the assurance that she is on the job as a reliable go-between

RADIA: Barkha, what I’m told is that the Congress yesterday, apparently, God knows who they are talking to in the DMK.

BARKHA: Haan, well must be Maran…

RADIA: Relayed—no, they relayed that the infrastructure portfolio should not be given to Maran or Baalu.

BARKHA: No, that’s because they want to keep it for themselves.

RADIA: No, they wanted to; they didn’t want any infrastructure, that’s what Prime Minister said, so he said that’s why they give him labour, fertiliser, chemical—and telecom, IT, they said for Raja. So what has happened is, is that message not relayed to Karunanidhi?

RADIA: They might have told some minion down the line or told Maran who is not relaying the truth.

BARKHA: I think they have told Maran.

RADIA: Yeah, now what they need to do is, they need to speak to Kani so she can set up the discussion with her father, because even the Prime Minister’s discussion was … she was the one who’s translating, and it was a very brief discussion for two minutes.

RADIA: That we’ll try and work it out, and the let’s not you know take it a hasty easy decision. That’s the type of conversation that happened.

BARKHA: No, I’ll set it up as soon as they get out of RCR.

RADIA: What she saying is that, you know, that someone senior like Ghulam [Nabi Azad, senior Congress leader]—because he is the one who is authorised to speak. ….

RADIA: Right? Was to speak to her then she can tell her father that I have got this message from the Congress.

RADIA: Yeah, and then she said when father lands, I can speak to him.

The two conversationalists touch base again

RADIA: They will speak to her?

RADIA: You know, the problem is she’s catching a flight at five haan, going back. Dayanidhi Maran is attending the swearing in when only Raja has been authorised to attend, so he’s gone and told his leader that Ahmed Patel has told me especially to attend the swearing in.

BARKHA: Ahmed says this is rubbish …

RADIA: But I am telling you but this. Karunanidhi’s very confused.

BARKHA: No, but why can’t Kani stay also and attend it?

RADIA: She doesn’t want to attend no because her father told her to come back. She has to follow what she’s father says, no. Call Ghulam then.

BARKHA: Let me call him.

“I am telling you, nahin hai. Trust me. Nahin hai” —NIIRA RADIA

RADIA: Correct, correct, and they are not individuals. Let me tell you one thing’s for sure, 3 plus 4 was yesterday; because of Maran, they wanted to make it 4 plus 3.

RADIA: So, now it is back to 3 plus 4 that was already worked on the table?

BARKHA: No, so why does this formula not sound right then?

RADIA: Because of Alagiri naa, if you make Alagiri… not cabinet. No, he’s not got cabinet.

BARKHA: Oh, Alagiri got what, according to these things?

RADIA: You see, according to her, he’s got Health, but he can’t be cabinet. Either Maran is not cabinet, either Raja is not cabinet or Baalu’s not.

BARKHA: Alagiri’s got Health and that’s a big compromise by Congress because they said we won’t give them Health. So that’s their face saver. No, but Alagiri, Health can be cabinet?

RADIA: Agreed, but then Raja is MoS.

RADIA: Then is Baalu MoS?

BARKHA: Nahin ho sakta. Nahin, nahin, nahin, if Baalu gets the Heavy Industries and Alagiri is in the Fertiliser, according to …. Baalu gets Fertilizer; Alagiri gets this thing, Health.

RADIA: Maran gets Telecom and IT.

BARKHA: Maran gets Telecom and IT. Raja gets demoted.

RADIA: I am telling you nahin hai (laughing). Trust me, nahin hai.

In yet another telecon, Barkha Dutt explains her situation to Niira Radia

“Everybody I know in the Congress was at the swearing-in, so I haven’t been able to speak with the top guys, and now I just finished and I am going to make my set of calls” BARKHA DUTT

BARKHA: You see, what happened was everybody I know in the Congress was at the swearing in, so I haven’t been able to speak with the top guys, and now I just finished and I am going to make my set of calls.

BARKHA: Where is Daya? Where is Maran?

RADIA: So Raja was the only one who’s authorised to attend which he’s done and Raja’s catching the 8:40 flight…