Tigers have killed more than 50 people around the Tadoba Andhari reserve since 2006. Why is Maharashtra’s Chandrapur district turning into India’s bloodiest tiger conflict zone? 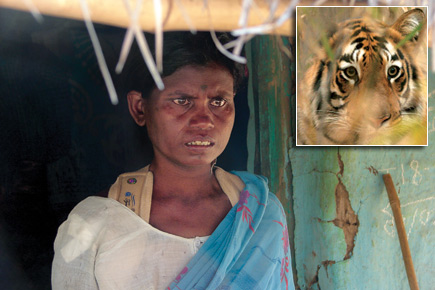 
But for her husband, Kamala Chandok Kudape would have been devoured by a tiger. Her eyes still darting to and fro, she tells the story she has been repeating since 18 January when she went into the fringe forests of the Tadoba Andhari reserve to collect firewood.

Kamala’s husband had climbed a tree and she was picking up twigs below when a tiger leapt from behind. Before she could realise what was on, the animal’s claws were tearing into her flesh. Then, the unthinkable happened. Her husband jumped off the tree and the tiger fled, leaving Kamala bleeding from a deep shoulder injury.

But that is not the story.

For more than four years now, one person dies in tiger attacks around Tadoba every month—a frequency of conflict higher than any recorded anywhere, except the Bangladeshi Sunderbans, in recent times.

Part of the erstwhile Gondwana forests, Tadoba has been home to tigers for ages, with no history of major conflict. Data available since 1992 shows only eight human deaths due to tiger attacks in five years till 1996. Early signs of escalation in conflict were reported in 2002. By 2006, human casualties became routine; in 2007, a suspected maneater was killed after public outrage. After a brief lull, however, the attacks continued. In the last three months, tigers have targeted nine people here, killing seven.

Nawargaon is at the centre of a 50-km north-south strip—from Chimur to Mul—along the eastern boundary of Tadoba that has suffered the recent spate in attacks. The fringe forests hemming in roads and croplands are surprisingly thick for the dry winter. The bushy growth of Sindi, Dhaora or Papat offer excellent camouflage. Tigers could be lurking around, anywhere.

Kamala’s is the first hutment as one walks into Alisur village, barely 50 metres from the road connecting Nawargaon to Chimur. The spot where she was attacked is a couple of kilometres down the blacktop road, and then, not more than 100 metres inside the bushy growth. I could clearly hear the traffic and people on the road as I stood under the tree. The tiger must have been fearless enough to target her so close to civilisation.

Or was it? For, the fact that she survived with an injury clearly indicates that Kamala was targeted by a rather edgy and inexperienced predator.

Kamala was the fourth victim in the latest series of nine attacks. The first incident happened on 19 December near Keorapet village. Forty-year-old Sharda was eaten up when she went to the forest to collect firewood. Tigers usually do not look to hunt for about a week after feeding on a kill. The next attack was reported on 26 December, near Mane Mohadi village.

The second victim escaped the attack and the tiger remained hungry. Within two days, the third attack was reported at Seoni. But the tiger could not feed on the kill as villagers entered the forest soon enough to recover the body. The predator probably soon managed to make an animal kill, as peace prevailed for the next three weeks. Then, it singled Kamala out without realising that her brave husband was up there on the tree.

When the tiger struck again on 4 February, it appeared really desperate. Three women were killed on three consecutive days within a stretch of 14 kilometres at Pedgaon, Jamsala and Singadzari. It was at Singadzari that people got a fleeting glimpse of the tiger near the kill.

The animal appeared to be a young male.

In all three cases, the villagers recovered the bodies, leaving the tiger hungry. Two days later, a man was reported killed 40 kilometres from Jamsala near Chimur. This time, the tiger had eaten some of its kill. Many were sceptical if it was the same tiger at work in Chimur, as the next attack was reported on 16 February near Jamsala again. But it is not impossible for a tiger to make two kills within six days 40 kilometres apart.

Were the attacks accidental? Unlikely, since each time, the carcass was dragged away from the spot of the kill and consumed on two occasions that the predator was not immediately disturbed by a search team. But the tiger attacked victims only once they entered forest patches. If the animal was stalking people for easy prey, what stopped it from entering villages?

By all signs, this was confusing tiger behaviour. So what has changed around Tadoba over the last decade to trigger such conflict?

In terms of land use, not much. Chandrapur district has been a hub of coal mining for decades, and the southern fringes of Tadoba were always subject to disturbances with a number of opencast mines in operation. No new factory or dam has come up in the last decade either.

Y Yadav, conservator of forests, Chandrapur Division, maintained that some degree of conflict was inevitable with so many tigers and people around, and that the recent escalation was on account of rising tiger numbers.

A 625-sq km reserve, Tadoba claims to have 50 tigers. Another 20 roam the fringe forests. But then, Tadoba had reported more than 40 tigers even ten years ago. Besides, Sanjay Thakre, conservator of forests, Tadoba Andhari tiger reserve, pointed out that there was no dramatic increase of recency in the number of tigers.

On the other hand, could it be possible that the villages surrounding Tadoba experienced a spurt in population? Water scarcity doesn’t allow more than one crop here. Villagers must enter the forest to collect firewood and bamboo to support themselves during the lean seasons. In every village around Tadoba, virtually every household depends on bamboo work.

At Seoni, village elders said at least 100 villagers enter the forest everyday and that the numbers had nearly doubled over a decade. Probed further, they explained that many families from other villages had locally migrated to villages like Seoni, which were at zero distance from the forest, so that they could collect bamboo easily.

Nobody has any definite figures for these settlers, but some villagers counted their new neighbours as one-fifth of the population. What is more, these settlers own little land and survive solely on bamboo extraction.

The maths can get scary. Nearly 10,000 families live in 60 villages around Tadoba. Each family makes about Rs 30 daily—the price of a bamboo mat—from this cottage industry, extracting at least four bamboos for every mat. Most of this massive extraction is illegal and goes on unchecked, thinning the mixed bamboo forests.

The story goes back to 1986 when a truckload of bamboo products was intercepted by the forest department. This triggered a prolonged legal battle which reached the Supreme Court in 1997. The apex court upheld the Bombay High Court’s 1996 order that no transit pass was required for bamboo products.

So in 1998, the forest department lifted the bar on transporting bamboo products, though the source of the bamboo would still require verification. Gradually, however, the local forest authorities came around to doing away with even the no-objection certificate for legal bamboo.

Villagers now enter the forests in thousands and spend long hours cutting down the bamboo to thin strips which are then carried out of the forests openly. And a tiger attack, unless reported nearby, is not enough reason for them to worry.

Harshwardhan Dhanwatey, whose NGO Tract has been working closely with the forest department since 2006, finds no justification in blaming tigers. With thousands of people inside the forests, reasoned Dhanwatey, many more attacks would surely have been reported were tigers not reclusive by nature, avoiding people.

But more than 50 deaths—few of them accidental—in four years also indicate that not all Tadoba tigers have been behaving naturally. Here’s why.

In the past year, five Tadoba tigresses have disappeared—feared poached. Their cubs either died or were rescued to captivity. Thakre did not rule out the possibility that more cub-rearing tigresses of Tadoba may have been poached. Without proper grooming, orphaned young tigers lack hunting skills and often target easy prey. Incidentally, the ‘maneater of Talodi’ shot dead in 2007 was a young male. As is the Seoni tiger believed to be behind the recent attacks.

Poaching apart, a young male tiger could be forced to leave his mother prematurely because of the presence of a dominant male nearby. Official data revealed that a tigress with a sub-adult male cub was roaming the peripheral forests of the Kolsa range adjoining the conflict zone. The cub has not been spotted in the reserve for some time. The monitoring records, however, showed the presence of a big male in the area.

Could this runaway sub-adult male be behind these attacks? The bosses of the two adjoining forest managements—Tadoba and Chandrapur—have little coordination and no definite answers.

Unsurprisingly, the department’s response to sustained conflict has been ad hoc. When public anger boils over, officials place a few trap-cages or order the shooting of the supposed maneater. But it is almost impossible to identify a maneater unless found at a human kill. It is a matter of chance before an innocent tiger pays the price for the department’s arbitrary methods.

The lack of a scientific strategy was evident when a leopard was trapped on 2 March in one of the cages meant for tigers. Instead of immediately releasing the accidentally trapped animal, the authorities kept the leopard captive for two days. Then they transported the stressed-out animal 30 kilometres to the other side of the reserve and released it in territory unfamiliar to it.

»Poaching, orphaned cubs, habitat loss, too many people inside forests, sustained conflict and no scientific mitigation strategy complete the recipe for disaster at Tadoba. But it is possible to turn the tide by ensuring a few fundamentals.

»Land Use: Tadoba cannot afford to become an island. The 1,150 sq km buffer area has to be notified at the earliest so that mining activities do not eat into the corridor to Junona forests in the south. The proposed Human Dam Project would be a death blow as it will sever the reserve’s only connection to the central Indian forest landscape through Brahmapuri and Nagzira forests. These corridors are absolutely vital for Tadoba’s far-roaming tigers that will otherwise crowd the fringes and exacerbate conflict.

»Management: The five villages still inside the reserve have to be relocated so that a larger inviolate area can accommodate more tigers. The reserve requires more ground staff. The present size of beats—an average of 1,800 hectare—makes effective monitoring impossible.

»Protection: There is virtually no monitoring outside the reserve. Dhanwatey’s team has been involved in a corridor conservation programme in three ranges, regularly monitoring big cat movements with forest staff since 2008. Conflict has come down in those parts. Monitoring is also key to curbing poaching, ensuring fewer problem tigers, and lowering chances of conflict.

»Livelihood: A thorough demographic study of the 60 villages around Tadoba is needed to evaluate local migration and livelihood issues. The villagers will only be too happy to give up collecting firewood in the forests if given subsidised fuel. Attempts to regulate bamboo extraction, however, will invite stiff resistance.

With around 10,000 families each making about Rs 30 daily, the local bamboo industry is worth well over Rs 1 crore. With the Centre releasing hundreds of crore to resettle villages, a couple of crore will be well spent on an alternative livelihood project around Tadoba to ease pressure on the forest.