A national sugar crisis. An Assembly election in Maharashtra. For better or worse, they’re closely entwined. 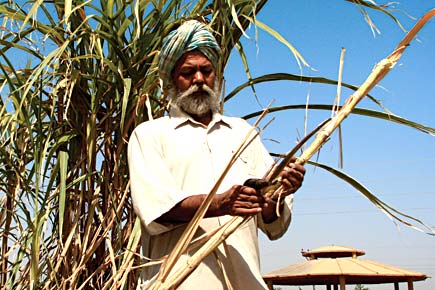 A national sugar crisis. An Assembly election in Maharashtra. For better or worse, they’re closely entwined.


Sugar has always been a secret of the Congress’s energy in Maharashtra. Electorally, the commodity has given the party rich dividends. It has helped it stay in power for nearly four-and-a-half decades in the state. The product is singularly responsible for creating wealthy barons who wield considerable clout in the state’s politics and impact every decision.

All this is about to change now. The acute shortage of sugar and its spiralling price is likely to be the most important election issue in the run-up to Maharashtra’s 13 October Assembly polls. Large-scale hoarding has begun, and while the Centre has announced a ban on wholesalers storing over 200 tonnes for more than 30 days (any bulk consumption needs to be verified by a chartered accountant), its effectiveness is far from assured. For one, it has been left up to the states to implement. For another, there are always ways around such measures.

In the thick of the action is Union Agriculture Minister Sharad Pawar, who heads the Nationalist Congress Party (NCP), an ally in the state’s Congress-led Democratic Front government. As sugar anxieties grew, he predicted a retail price of Rs 40 per kg by year end—for the sake of a better-informed country, it would seem.

The scenario is grim, say sources in the Sugar Federation, and will only worsen. Sensing opportunity, the Shiv Sena-Bharatiya Janata Party (BJP) combine has tried every trick in the book to make inroads into the state’s sugar lobbies—the most powerful base of the Congress—and give the ruling party a run for its votes. The saffron combine has been aggressively campaigning in sugar-rich western Maharashtra, a region that accounts for the Congress’s largest chunk of legislators.

The closure of some sugar mills and the sickness of others, the scarcity of raw material, poor recovery from sugarcane, uneconomic size of operations, lack of modernisation, and high cost of working capital are the main reasons being touted for the state’s sugar slump. Of the 225 sugar mills in Maharashtra, barely 100 are in working order. The rest are dysfunctional—a matter of grave concern nationally, since the state makes up 30 per cent of India’s sugar production.

In January, the state government put up 29 cooperative sugar factories linked to political heavyweights up for sale, for their failure to remain operational. Despite heavy financial packages, the mills haven’t been able to sort out their problems. Even help from the Centre has not worked. Most of these factories are in western Maharashtra and Marathwada, an NCP stronghold. Losses in this sector during 2007-08 were pegged at Rs 2,000 crore, and sources indicate 2008-09 brought no relief. If that wasn’t enough, the Income Tax Department has made a claim of around Rs 20,000 crore from the state’s sugar mills. The errant mills, of course, are playing deaf.

Grocery shoppers are reeling under sugar selling at Rs 35 per kg already, and with the festive season due just before the polls, sugar could easily land the ruling party combine in a sticky gruel. “Sugar is a top concern,” says Vinod Tawade, a BJP leader, “The common man is affected by the short-sightedness of the government… Despite the shortage of sugar, the Centre is allowing its export, enabling traders to mint money.”

The Congress is likely to be caught ill-prepared for the fury—though it knows what’s brewing. “The sugar crisis has become a major embarrassment for the state government,” says Kanhaiyalal Gidwani, spokesperson for the Maharashtra Pradesh Congress Committee (MPCC), “The Opposition has taken up the issue very aggressively. During the onion crisis, the BJP lost four states that it ruled.”

In a worried letter to Congress President Sonia Gandhi, Gidwani has called for instant corrective measures to control prices of essential commodities such as sugar. He has also written to Prime Minister Manmohan Singh to reconsider amendments to the sugar policy. In a letter to Chief Minister Ashok Chavan, he has spoken categorically of the Maharashtra government’s lack of initiative on the matter. “There seems to be no futuristic planning regarding sugarcane cultivation,” he says, “About 50 per cent of the acreage under sugarcane cultivation has reduced.”

With the government’s sugarcane procurement price as low as Rs 950 per tonne, a sizeable number of farmers have diverted land and other resources to other cash crops. In 2008, the state produced about 9 million tonnes of cane, the same as in 2006, but up from the pathetic 6.5 million tonnes in 2007. That was a year in which 2.5 million tonnes in Marathwada had to be burnt because mills did not have the capacity to crush it. Farmers got paltry compensation for the unused cane, something they are still miffed about.

It’s a rare sugarcane crushing season that begins noiselessly. Farmers see loud agitations as the only way to coax a fair deal out of the state. Politicians, by playing price setters, enjoy the power they wield over the countryside through the procurement process. The crushing season starts in October, and with the election slated for the middle of the month, farmers are expected to be noisier than usual in making demands.

Since the electoral code of conduct is now in force, the state can’t negotiate with agitators. But what they want is known—that Maharashtra adopts the Statutory Advisory Price (SAP) policy that’s in play in Uttar Pradesh, Tamil Nadu, Punjab and Karnataka. Presently,  Maharashtra is using the Centre’s Statutory Minimum Price (SMP) policy. Under this, the Centre pays a procurement price of Rs 1,400 per tonne. Under SAP, farmers could get Rs 2,000 per tonne.

The state government, it would appear, doesn’t have the cash for it. This makes Congressmen gloomy. They complain of a carefully-nurtured cooperative sector being weaned away by political rivals, even as sugar mills run by those loyal to BJP and Shiv Sena networks outperform theirs. If the balance tilts, Congressmen fear, they could see all their pampering of cooperatives go waste. After all, successive Congress governments have done much to keep western Maharashtra well endowed with infrastructure and its mills well funded. Of the total 288 seats in the Assembly, 75 are from the sugar belt, and these could possibly hold the balance of power.

In sugar belt politics, Sharad Pawar is a past master of gaming the field to his advantage. Yet, he is more vulnerable this time than he lets on. In the Lok Sabha polls earlier this year, the NCP suffered the early effects of the sugar turmoil on its home turf. While the Shiv Sena’s Shivajirao Adhalrao Patil won in Shirur, independent Sadashiv Mandlik wrested Kolhapur from the NCP’s kitty. The party was jolted most severely by a relative lightweight, Raju Shetty, who ejected the NCP from the Hatkanangle seat. All three candidates had drawn attention to sugar and taken up issues bothering sugarcane farmers. Their success has provided the Shiv Sena-BJP inspiration for its statewide campaign now.

The agriculture minister has newer bothers as well. If a small defeat in a sugar factory election in Malegaon doesn’t worry him too much, his gram panchayat poll setback in Baramati certainly must. Some 23 of 31 villages in his pocketborough voted BJP. That should make it easier to read the cane husk. Neither the NCP nor Congress can count on a sweet outcome this October.